THE WHO - Hidden Gems, Part 2 & A Word About Who Comps

Yesterday’s post about my virtual reality Who album Hidden Gems has attracted more comments than those for all my others Who posts put together and is already my third most viewed Who post after the pic of Keith with John & Paul Beatle and the one about the Ronnie Scotts event on June 30. I am overwhelmed at the response and genuinely touched that so many Who fans read what I write and care sufficiently to put forward their own views.
I’m also pleased that many fans seem to like my track selection. One of my criteria for Hidden Gems was that none of the tracks that appeared on The Ultimate Collection (or any other hits compilations) could be included, thus avoiding any duplication for fans who’d already bought this. So that explains certain omissions that were suggested. The fact that I didn’t include any songs from after Who By Numbers was purely personal as I happen to believe that something crucial was missing without Keith on drums and that his playing on Who Are You wasn’t up to scratch. That’s not to say that The Who’s career after Keith (36 years as opposed to 14 as it happens) hasn’t produced some wonderful moments, just that I’m an old codger with too many memories of what used to be.
So I’m a bit surprised (but not displeased) that so many fans would have included more post-Keith tracks and, for that matter, more songs written by John. This proves there is a case for a reissue of The Ox Backtrack album or, perhaps even better, a CD that enhances it by adding some, if not all, of the tracks written by John and recorded by The Who after The Ox was released in 1970.
I love ‘A Quick One’, especially full-tilt live versions like those from Monterey and the Rock’n’Roll Circus, but I’d eliminated this as it was too long. However, I’m aware that when fans were recently invited to propose songs that The Who might consider for their forthcoming 50th Anniversary Tour, ‘AQO’ was high on the list which has been forwarded to Roger for consideration. So Ivor might just get another chance to have a nap after all. 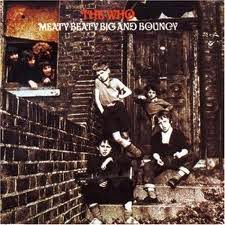 Which brings me to Meaty Beaty Big & Bouncy, which in an article that Pete wrote for Rolling Stone, he described as the best ever Who album and he was probably right. However, the truth is it was never seriously considered for reissue during the catalogue upgrade programme in the nineties or since, largely because all the tracks on it – and there were only 14 – would be included on a new hits CD that could contain many more tracks, in the event My Generation – The Very Best Of The Who. 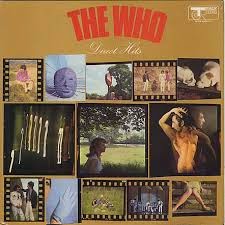 And while we’re on the subject, like most UK Who fans I bought Direct Hits when it came out in 1968 but was puzzled by the choice of songs. Why include ‘Bucket T’, ‘The Last Time’ and ‘In The City’ when you could have ‘I Can’t Explain’, ‘Anyway…’ and ‘My Generation’? It wasn’t until much later that I learned that the exclusion of these songs, all produced by Shel Talmy, was down to the ongoing bad blood between Kit Lambert and Talmy and that by leaving them off Track could avoid paying a substantial royalty to their former producer. This made Direct Hits inadequate as a retrospective of The Who’s career to that point, albeit an interesting curio. The situation was redressed by MBB&B which, thankfully, included Talmy’s essential early productions, evidently much to Lambert’s chagrin. 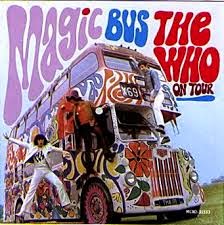 Still on the subject, a word about the first ever Who compilation album, Magic Bus – The Who On Tour, released only in the US in September 1968 to capitalise on interest in The Who generated by their extensive touring that year. As I wrote in my Who Music Guide: “The Who had quickly realised that their best chance of success was as a live band, but with this release Decca unwittingly did its corporate best to scupper those chances. For starters, the title gave a false impression that it was a live album; even worse, several tracks were badly mastered, and the entire concept – sleeve design and packaging – was just plain awful, outdated, and naïve. It could have seriously affected The Who’s US reputation were it not so blatantly obvious to anyone who knew anything about group that they had absolutely nothing whatsoever to do with it. The band were justifiably furious.”
Magic Bus didn’t contain any Shel Talmy productions either.
Finally, she who designed my virtual cover for Hidden Gems was most disappointed that no one commented on it!

Chris, you can tell Lisa there's a job going here when I finally hang up my pencils!

Geez Chris, suddenly this is the most popular blog in town, lol! Funny, when you ask people for their opinion, everybody chimes in! Lmao. Anyway, I know this sounds incredibly patronizing, but I really did like Lisa's design. The variations of the bullseye and inclusion of black really gives it a variety/ hidden / unknown feeling. Seriously, sharp look! As for the track listing, I'm not gonna bore u with particulars. But, I definitely HAVE to include post WBN songs ( I discovered the boys in 1977. Face Dances-Its Hard is my wheelhouse). I'd omit live tracks, and have a third live HG collection of just live stuff. Like the Backstage Pass issue. They're just too incredible live to pick a few songs. And absolutely an additional " John Songs" release. Thanks, as usual for the post. It's been a fun one.

First of all, thanks for this blog!!! I simply love reading your articles. Great compilation (I also made a playlist on my ipod but HAD to include "Dogs pt1". Wonderful artwork too, congratulate your wife!!!
Have you ever considered writing a similar article about PT's demos? I have always had a soft spot for Pete's demos...I don't think many songwriters are as meticulous as Townshend when it comes to making demos (perhaps with the exception of Andy Partridge). Taking into account that what has been officially released is but the tip of the iceberg I hope one day he decides to open his vault and release more material!