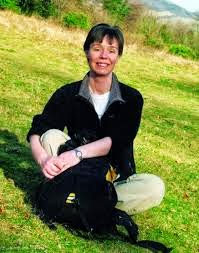 Jacquetta Fewster, who looks like she's chilling out at Newlands Corner, a mile or three from where we live.
Posted by Chris Charlesworth

You can chose where to live, you can chose who to vote for and you can chose your own lifestyle - you should follow your nose and instinct and try not to be swayed by either the media (all biased one way or another) or the politicians (obviously biased) - I am unwell and, this morning, called my GP, was given an IMMEDIATE appointment, went to the (crowded) surgery, was seen within 15 mins, diagnosed (Chest Infection) and sent for an X-Ray at my local walk in centre (done) - the Daily Mail headline (front page - about 144 point if I remember my typography correctly) warned that it won't be long before we all have to wait up to a month to see a Doctor - complete bollocks but food for the gullible -let your brain guide your writing hand - it's only a cross after all

Maybe not all areas, granted, but there are already some where one month waits for a doctor's appointment are very feasible indeed.

Start following our signals today and gain up to 270% daily.