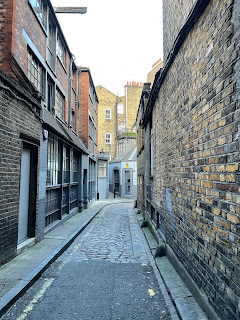 Newman Passage in central London’s Fitzrovia is a fine example of what London alleyways might have looked like in Victorian times. Connecting Newman Street with Rathbone Place, it was once noted for a crooked lamp post that Arthur and Terry from Minder tried to straighten but that is long gone now and the walls have been painted chic grey. Nevertheless, this narrow, cobbled little lane will forever remind me of that transitional period in my life, between 1980 and 1983, when circumstances obliged me to become a freelance music writer.

On Newman Street, at number 78, was Music Sales, the parent company of Omnibus Press; in the alley itself were the offices of a music publishing company called Leosong, where my girlfriend Jenny rented desk space; and at Rathbone Place end of the alley was the Newman Arms, a small pub that dates back to 1730 and, if its website is to be believed, once served George Orwell.

It was in the Newman Arms that I befriended Barry Miles, known to one and all by his surname only, and discussed books I might write or edit for Omnibus, of which he was the editor. Jenny and her friend Fiona used an office in Leosong to run TNT, their rock’n’roll PR company. That Omnibus and TNT were located so close together was simply a happy coincidence, but it meant we could all meet up in the Newman Arms after work.

In the late summer of 1980, RCA Records made me and several other employees, Jenny among them, redundant, justifying the decision “because of trading conditions resulting from the economic policies of the government,” ie Thatcher. I was never a fan and this politicised me leftwards for life. I was pretty much apolitical during the 1970s, largely because I spent almost six years in the US and never lived anywhere long enough in the UK to register to vote. Being made redundant changed all that.

Nevertheless, RCA generously gave me £3,000 as a settlement, which is over £14,000 in today’s money, so I wasn’t going to starve. I can’t recall what Jenny got but it wouldn’t have been as much as myself because she hadn’t worked there that long. Within two months I’d exchanged contracts on a one-bedroom garden flat in Nasmyth Street in Hammersmith which cost £18,000, a tiny sum by today’s standards. Some of RCA’s payout went as a deposit and my former boss there lied to the Halifax Building Society, saying I was still employed and on a salary, so the mortgage went through without a hitch.

I bought the flat from a beautiful Japanese Bunny Girl who worked at the Playboy Club, and she had a ridiculously handsome live-in black boyfriend who was a DJ somewhere in the West End. They were a handsome couple, very exotic, but seemed in a bit of a hurry to move. I never found out why but I suspect it had something to do with immigration.

In October, when the lease of our spacious and slightly swanky Gloucester Road flat ran out, Jenny and I hauled our stuff, which included my record collection by now shipped back from the US, to the less swanky Hammersmith basement. The downgrading of our living standards didn’t sit too well with her upwardly mobile aspirations but for the time being we were reasonably content.

The problem of what to do next was partially solved when, quite out of the blue, I was approached by a Manchester-based company called Savoy Books who offered me £500 to write a book about David Bowie. I hadn’t foreseen a career as a rock biographer but, in the event, it was life changing, not for the book itself but for unlocking the door to the future.

The £500 wasn’t forthcoming, though some time after I’d started writing the book – which was only about 30,000 words – an envelope arrived with £50 in used fivers. It was all I got, an early indication that the freedom offered by self-employment was precarious, and that chasing money would take up as much time and energy as actually earning it.

In the meantime, I started work, visiting Melody Maker’s offices on Meymott Street to Xerox their Bowie files, which included stuff written by me, then talking to a few people who might help in my research. I cheated a bit by including, almost verbatim, two longish MM pieces of mine, one the show review of the Diamond Dogs Revue from Toronto in 1974, the other my long interview with David, undertaken in Detroit in 1976. I typed it all up on the same Olivetti typewriter that I had brought back from the States, the one I took there in 1973. I must have written a million words on that little portable.

Jenny owned a car, a red Honda Civic, well used, and decided to swop it for a green VW Sirocco, quite sporty, and we installed a powerful Pioneer stereo system to play cassettes wherever we went. We drove to Skipton together, to see my dad, and Bournemouth, where Jenny was raised, and stayed with her mum. We settled into a routine at Nasmyth Street. She usually got up first to shower and fix her make-up and I’d drive her to work in the VW, then drive back and do some writing or whatever. The traffic wasn’t too bad in those days, and I soon learnt to navigate the backstreets of Bayswater and Mayfair, there and back within an hour. Most days I’d go and collect her after work too.

I was in bed in the flat on the morning of December 9 when Jenny shook me awake. “You won’t believe this but John Lennon’s been shot,” she said. At first, I didn’t believe her, but when I heard the radio it sunk in. I was numb. I threw on a few clothes and went out and bought some newspapers. I drove Jenny to work and when I got home I just sat there listening to the radio. At lunchtime I went to the Anglesea Arms pub across the road for a sandwich and sat on my own. Two men at the bar were discussing John’s death and I felt like telling them that I knew him once. Then I didn’t because I figured they wouldn’t believe me.

A day or two later a reporter from the Sunday Mirror rang and asked me to help with their coverage of John’s murder. I guess they’d found my name by reading my interviews with him in Melody Maker. One of their reporters took me to lunch in Covent Garden and it soon became clear to me that he was keen to dredge up something controversial. I didn’t much like him and decided to ask for what I thought was an outrageous sum for my services, £5,000. To my astonishment he agreed. I should have asked for more.

Unlike almost everyone else who’d followed John’s life, the man from the Sunday Mirror didn’t seem to know that John and Yoko had separated briefly in 1973, reuniting the following year. He thought it was a scoop. I told him it was old news but he took no notice. Similarly, he seemed surprised when I told them that there were times when John and Paul disagreed, especially as The Beatles were collapsing, and he stressed this in his coverage too. I told him nothing he couldn’t have found in the Mirror’s own clippings file if only he’d bothered to look but he seemed to think that because I’d met John a few times I was a veritable oracle in all matters Lennon. I like to think that John would have found it wryly amusing. I certainly did. Still, I felt a bit guilty when the cheque for £5,000 arrived so I gave some of it to a charity that Yoko was promoting. 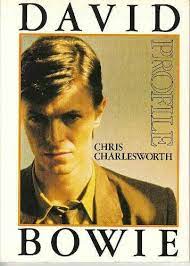 The publishers of my Bowie book, titled David Bowie Profile, had a co-publishing deal with a London-based book publisher called Proteus whose offices were in Praed Street near Paddington Station, so I made an appointment with the MD there, a guy called Michael Brecher, to try and find out a bit more about Savoy and why they hadn’t paid me.

He wasn’t able to tell me much and I got the impression that he wasn’t too surprised that Savoy hadn’t come through with the money. Still, I wanted to check out this Proteus company for myself and, just maybe, offer my services in some editorial capacity. The upshot was that they commissioned me to write a book called The A-Z of Rock Guitarists, the first of four books I would write for Proteus over the next two years.

More advantageously in the long term, the Bowie book also brought me to the attention of Miles, who called and asked me to update a book Omnibus had published called The David Bowie Black Book. So it was that I got to know Miles, meeting him in the Newman Arms, where one evening in early 1981 he asked me if I’d like to write a book on The Who.

i left london for a week of fun in nyc st patricks day 1980(stayed 42 years!)-spending the dosh island gave me for getting the B52s and the JAGS on radio one
-am sure we were at various music biz bashes late 70s!!
enjoy your prose!
i walked in to maxs kansas city about 8pm that awful december night-the bartender barely knew me but shouted "your boys been shot"on enquiring which boy-he handed me a beer stating bluntly JOHN leNNON

I found this installment very interesting, as they usually are. I visited London in 1988 & you graciously met me at The Forum on Cromwell Rd,as we had corresponded for a bit re: some out of print Genesis books.You sent me a signed copy of Before I Get Old. I remember then you said you had come by tube from Hammersmith. Do you recall, I sent you a Bowie book you were unable to obtain in UK? I will never forget your kindness to me, & you are still a favorite writer if mine. DEB