“Bugger me,” said Dougal*, standing alongside me as we awaited The Who’s appearance on the Great Oak stage last night. “Bit of a change from when we went to the Orchid in Purley. We were at IBC studios and Kit** said better get down there as it was £150 and they needed the money, so we piled the gear into the van and off we went.”
The Great Oak looks a bit like a stage set from Game Of Thrones; gigantic, Bible black, towering up into the sky, at each side an imitation tree of colossal proportions with foliage that extends across the top to meet its twin on the other side, and alongside them moving outwards, and to the rear, film screens the size of houses. It’s so big it dwarfs the bands, The Who included, but this is BIG ROCK, not really my cup of tea as a rule these days. Nevertheless, Dougal and I and those we brought along with us are fortunate to be fairly close to the front (in a relative sense), in an area where almost all the rest of those around us have travelled for miles to be in this preferred spot and paid £49 more than the entire group was paid when Dougal drove them down to Purley that night. 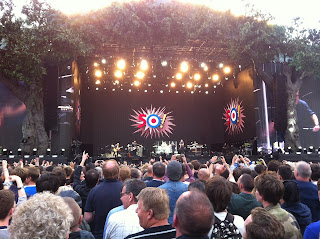 But let’s not dwell on such matters. Here I am for maybe the last time. There’s 65,000 of us here in London’s largest city park tonight and of all the many times I’ve seen The Who, this is only the fourth time in the open air, following on from Plumpton (1969), The Oval (’71) and Jacksonville (’76), each of these occasions significant in one way or another. Plumpton was my first ever Who show, The Oval the first time I watched them from the side of the stage (and with my sister beside me) and Jacksonville the last time I saw them with Keith on drums. It is therefore fitting that here in Hyde Park, in the open air tonight, my son Sam is with me watching The Who perform their great songs. It’s his first Who show, my 37th.
As at Birmingham six months ago, first up is the six-piece band followed a moment or two later by the two surviving members of the rock group that between 1969 and 1976 was by common consent, mine included, the greatest live act in the world. The length of his hair aside, the singer doesn’t look that different from the boy I saw at Plumpton, a bit stockier maybe, fuller in the face and now in prescription shades, his suede tasselled cloak long ago exchanged for less showy black jeans and a dark blue shirt, but he’s still eager, still aggressive, still treading his stage like a caged lion, still as up for it as he was when he was a teenager looking for a better life than beating sheet metal. And then there’s the guitarist, his friend and occasional adversary, who looks markedly different now, the pristine white overalls he used to wear in 1969 long discarded in favour of black jeans and a dark grey t-shirt, looking much older now, bald, slightly stooped, not quite so eager perhaps but still aggressive, still treating his instrument like a disposable tool of the trade on yet another stage to pound like a clown, living out his past, but – tonight – seemingly with a good heart and a genuinely affable nature. A count in from the drummer, bashing his sticks together, and we’re off: “Got a feeling inside…”
T’was ever thus. I’m hard pressed to think of any other top flight act of The Who’s (or any others’) vintage that would even consider opening their set with their first hit. ‘I Can’t Explain’ still sounds like it could have been written yesterday and recorded by, say, Arctic Monkeys or Kings of Leon, or some band from 2020 we haven’t heard of yet. Having already seen bits of sets by Johnny Marr, Kaiser Chiefs and Paul Weller this afternoon, it’s clear The Who have turned up the PA a notch or three, as is their right, and from the get go it seems the crowd – at least those around me – are well up for it. All of them bellow ‘Can’t Explain’, suitably tunelessly, and do likewise for most of what follows which, as a qualified reporter, it is my duty to itemise: ‘The Seeker’, ‘Who Are You’, ‘The Kids Are Alright’, ‘Pictures of Lily’, ‘I Can See For Miles’, ‘My Generation’, ‘Behind Blue Eyes’, ‘Bargain’, ‘Join Together’, ‘You Better You Bet’, ‘I’m One’, ‘Love Reign O’er Me’, ‘Eminence Front’, ‘Amazing Journey’, ‘Sparks’, ‘Pinball Wizard’, ‘See Me Feel Me’, ‘Baba O’Riley’ and ‘Won’t Get Fooled Again’.
And now for the details. To be honest I preferred the show I reported on from Birmingham last December, which was louder, more intimate (in a relative sense: 12,000 as opposed to 65,000) and quite a bit longer. Tonight in Hyde Park I watch a professional Who performance tailored for a massive crowd in the open air that ticked all the boxes but eliminated the possibility of error that, as is so often the case, inspires greatness in them. It also eliminated the songs that serious Who fans might best appreciate, like ‘So Sad About Us’, ‘A Quick One’ and the Quadrophenia songs that feature virtual performances by John Entwistle and Keith Moon, but these seem to have been jettisoned during the current spate of touring anyway. I cannot fault The Who’s performance in any way tonight but, as if nature was specifically commissioned to play its part, the show didn’t really catch fire until the sun set which, happily, coincided with the Tommy segment. Pete windmilled a lot but it never looked like his guitar was really attached to him, and Roger threw his mike around but always in a manner that made it easy to catch. There was a chance that things might go awry during ‘Pictures of Lily’, requested by Paul Weller, to whom Roger paid generous tribute, which was unrehearsed and not part of the planned set (God, how I hate the idea of a planned set by The Who!), and all that was screened behind throughout the entire song, performed briskly and with panache, was Keith in his black basque. Aaawww, as they say to newly born puppies. 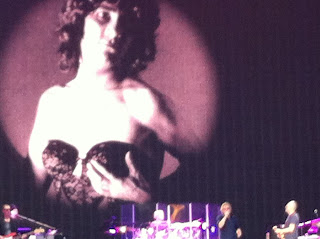 The Mr Townshend I saw at Birmingham that I described as Mr Grumpy was a changed man, friendly even, all sweetness and light, dedicating ‘My Gen’ to ‘people of any age’. This was a song they didn’t play at B’ham and it was nicely synchronised with the footage of that old b&w movie that Kit Lambert shot at the Railway in 1964. ‘Join Together’, another song they’ve added since that show, found the cameras focused on the crowd, seen now on the screens behind and at the side of the band, in this way realising Pete’s concept of including the audience, all the many thousands of us, as part of the show. Other songs came and went, all much appreciated, especially ‘Kids’ with its Mod backdrop of scenes from the Quadrophenia film, ‘I Can See For Miles’ with Zak a blur on the toms, ‘Blue Eyes’, a mighty sing-along, and ‘Bargain’, given a bit of stick from Pete towards the end. 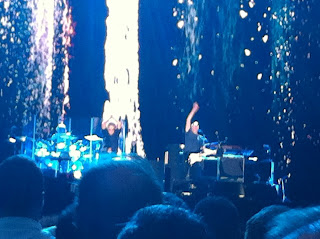 ‘Love Reign O’er Me’ has become Roger’s showpiece and he was outstanding, closing, oddly, in a deep bass timbre that seemed to take Pete by surprise. While they were playing ‘Eminence Front’ I was reminded by another Who pal close to me that this was the newest song of the set, albeit 33 years old now. What a contrast to Paul Weller who offered several songs, perhaps too many, from his most recent album, released earlier this year, a brave but possibly unappreciated gesture since his set only really came alive when he sang Jam songs. But I digress…
By now the eight-man Who were into Tommy which, as noted, was when the whole concert suddenly took off. ‘Amazing Journey’ seemed to galvanise things and ‘Sparks/Underture’ – its churning opening rumble suspended, brilliantly, while Roger riffed on the ‘Captain Walker didn’t come home’ lines – was spectacular, as it always was and still is. The audience around me seemed to feel it too, all of us lifted to a higher level as those well-known crescendos and octave drops filled the night. Townshend was feeling it too, improvising on the chords, feeling his way along the fretboard to harmonics that fed Zak who held back unexpectedly and then tumbled back into the rhythmic cascades, challenging Pete, eye to eye, just like when Keith was up there. This was The Who as they used to be, that spontaneous touch of greatness, back to the time when they really were the best in the business. The sun had just come down. Perfect. Twilight arrived as Pete played the descending chords of ‘Pinball’’s intro, triggering another crowd eruption. Although an old stager like me missed John’s dramatic bass tones, all 65,000 of us were behind Roger as the young boy who played the silver ball and the night, finally, was as alive as it was ever going to get. It was dark now but Roger could see us, feel us, touch us and heal us as the Tommy hymn, the ‘See Me Feel Me’ climax, finally turned a good show into a great one, and we were careering into the home straight. ‘Baba O’Riley’ was terrific and ‘Fooled Again’ took us home, Roger exploding on that final scream – and God, how I wish Pete was still able to make that leap like he used to.
As ‘Fooled’ finally drew to a close I looked at my phone and realised they had 12 minutes to go. Earlier in the day I’d chatted with Bill Curbishly who’d told me that the strict curfew in Hyde Park was 10.20, but they’d stopped at 10.08. Twelve minutes, I thought, was ample time for ‘Substitute’ but it wasn’t to be. Pete introduced the band, starting with his brother Simon, then moving down the line of keyboard players at the back. He acclaimed Pino Paladino as the best bass player in the world, implying that only the best bass player in the world could fill the lead boots once worn by John Entwistle, and then he introduced Zak Starkey, quite possibly the best drummer in the world too, saying he’d learned at the feet of the… well, he couldn't bring himself to call Keith the master, though he did say, unconvincingly, that he missed him and called him… the wanker! I looked at Dougal and laughed. I’m pretty sure Keith, of all people, never had much cause to engage in wanking, I said. Dougal agreed, smirking. We also agreed that Zak was as much a star of this show as anyone else on that stage, just like Keith used to be, and the only man in the world who could replace him. 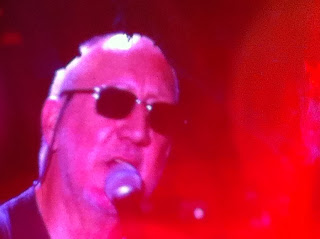 It was almost over. No more songs. Then Roger said something about how none of us would be here but for the bloke on his left. The crowd exploded for a final time. Be lucky, he said, as they all disappeared.
Wonder what it would have been like in Purley.

* Dougal, aka Peter Butler, worked as a Who crew member from 1967, graduating to become Keith Moon’s personal assistant in 1971, author of two books and a long time friend.
** Lambert, of course.
Posted by Chris Charlesworth