JOHN LENNON – In His Own Onion

Although there's enough buskers on the streets to fill the holes in the Albert Hall, the Edinburgh Festival is not really about rock music. There were no name acts performing, not unless you count my old pal John Otway, whose name I spotted on a flyer and whose show clashed with a comic we wanted to see, but Otway is as much a comic as a musician anyway. However, another John, born in Liverpool 75 years ago this October and senselessly gunned down in New York 40 years later, was inescapable, the poster below decorating railings everywhere you looked. And nor was this the only Edinburgh manifestation of the chief Beatle, for his 1964 book In His Own Write has been turned into a stage play, of which more later. 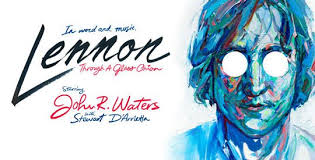 The major production, though, is Lennon Through A Glass Onion, which played nightly at the Assembly Hall throughout the Festival; a poignant bio-play that sees grey-haired John R. Waters reflecting on John’s life and music in a series of soliloquies and songs, accompanied for the most part by his own guitar and Stewart D’Arrietta on piano. Waters, an Australian actor, sounds remarkably like John Lennon, at least the Liverpool-accented tenor of his speaking voice if not quite that remarkable singing voice. Light-hearted it wasn’t, Water’s dark attire – black jeans, shirt and leather jacket – setting a tone that to me seemed to echo the imposing but rather grim and sooty stone architecture for which this lovely city is famous.
The 90-minute piece begins at the end, five shots ringing out to remind us of the awful events of December 8, 1980, then slips back to John’s childhood evoked by the Liverpool Lullaby ‘Mucky Kid’, though I’m pretty sure Aunt Mimi, were she alive today, would flinch at the suggestion that the nephew she raised was ‘as dirty as a dustbin lid’. Thereafter John Waters offers a selective account of John’s life in the first person, punctuated by songs, first those Beatles songs that we now know were largely John’s own work – ‘Help’ (taken at a slow pace and all the better for it), ‘Hide Your Love Away’, ‘Nowhere Man’, ‘Strawberry Fields’, ‘Lucy’, ‘A Day In The Life’, ‘Julia’, ‘Come Together’ and more – followed by solo songs, of which ‘Working Class Hero’ and ‘God’ were the most profound. ‘Imagine’ closed the show, perhaps inevitably, and it was clear that all had been chosen for their narrative appeal.
Waters stands with his legs apart, facing down his audience just as John did, and his plain spoken, unsentimental dialogue seems to reinforce the feeling that John Lennon was a bit lost amid the clamour of Beatlemania and the vast, unwieldy fame that came with it. It wasn’t my fault, he seems to be saying, I didn’t ask for this life. It just happened because I liked showing off. There is a deep sense of drama in these spoken words, a sense of impending tragedy that creates an atmosphere of destiny, of impending doom, that was relieved only by the music, especially the up-tempo songs like ‘Revolution’ which was driven along by D’Arrietta’s powerful boogie-woogie piano. 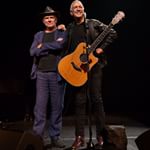 Yoko is well represented, especially the antipathy she aroused – “British Anglo-Saxon racism – that’s what it was” – but Cynthia didn’t get a mention at all. John’s rivalry with Paul was touched on but unless I missed it I never heard so much as a mention of George or Ringo. John’s drug use, too, is avoided, perhaps on the wishes of Yoko whose blessing must have been sought for copyright purposes. I was also a bit disappointed that two key Lennon songs – ‘I Am The Walrus’ and ‘Don’t Let Me Down’, both personal favourites – were omitted but these are minor quibbles. The audience of mainly over fifties was rapt throughout, breaking into applause after the most memorable songs.
Lennon Through A Glass Onion is by no means new. Waters and D’Arrietta have been performing it since 1992, and it is a tribute to their skills and the show itself that it still feels fresh, contemporary and – most of all – captivating. For those unfamiliar with Lennon’s story it would have been enlightening too, shining a light on what was going on in the mind of the rock star who more than any other, at least in the UK, opened our ears to the music’s potential. 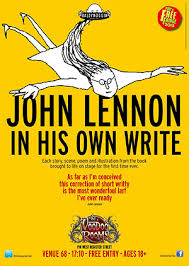 Meanwhile, over the Princes Street Gardens at the Voodoo Rooms, Peter Caulfield, Jonathan Glew and Cassie Vallence, aka Baldynoggin Productions, were enacting In His Own Right as a series of wry sketches taken from the book, a further look into the eccentricity that made Lennon (and The Beatles) as original as they were. The fact that Vallence was visibly pregnant just seemed to add to the sense of absurdity, something that I’m sure John would have appreciated.
When the short stories are acted out in this way, affectionately and with a sly wink here and there, the influences become more obvious: Edward Lear, the Goons, Milligan in particular, and perhaps even Stanley Unwin. We also see the beginnings of Python amid pieces like ‘No Flies On Frank’, ‘At The Dennis’, ‘The Wrestling Dog’, ‘Treasure Ivan’, ‘Nicely Nicely Clive’ and ‘On Safairy With Whide Hunter’. The Enid Blyton Famous Five spoof contains the line ‘keep off the grass’, which I found touching in the light of Bob Gruen’s now famous photo of John by the Statute of Liberty, while the non-PC bigotry in references to people of colour and, more especially, the handicapped seemed to reflect the Lennon of Liverpool as opposed to the Lennon of the World. It also reflects John’s rather cruel sense of humour, epitomised by ‘A Surprise For Little Bobby’, the tale of a one-handed lad who receives a hook for his other arm as a Christmas present, prompting him to chop off his good hand.
The skits were acted out against a screen on which John’s fine line drawings appeared, a further nod in the direction of his restless spirit, and at one point the three actors appeared to read from copies of The Daily Howl, John’s pre-teen school newspaper that at least one of his long-suffering teachers recognised as the work of a fine mind.
While not as ambitious as Lennon Through A Glass Onion, In His Own Write casts more light on John Lennon’s endless inventiveness and offers yet more evidence that America’s irrational gun madness silenced one of the world’s most original creative talents.