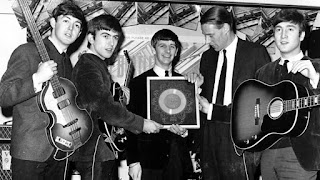 There have been so many premature deaths of men and women associated with The Beatles that it comes almost as something of a relief that their great record producer George Martin bucked the trend by living to the age of 90. One of only three men upon whom the title of ‘fifth Beatle’ might deservedly be bestowed – the others are Brian Epstein and Neil Aspinall – Martin’s greatest achievement was not so much the production of The Beatles’ records or even in recognising the group's potential in the first place. No, for my money it was giving them the space in which to grow, marshalling their talents without in any way curbing their instincts and never – unlike so many other record producers of his era – dictatorially imposing his own ideas on the way their music should sound. In taking this course Martin allowed the Beatles’ extraordinary collective imagination to flourish without constraint, with the result that their catalogue of songs remains virtually peerless, a blue print for excellence in popular music that has yet to be surpassed.

Looking back at his life up to the moment that he came into contact with them and Brian Epstein, this might seem unlikely. Although not rich, Martin was ‘officer class’, a man with bearing whose presence commanded respect. I met him only twice and briefly at that, once in London at some record company reception during the seventies and again in 1990 at Paul McCartney’s farm near Peasmarsh in Sussex on the occasion of Paul’s daughter Mary’s 21st birthday party. (At the time Mary was working as a photo researcher at Music Sales and I was her boss.) On both occasions I felt inclined to address George Martin as ‘Sir’, even though he wouldn’t receive his Knighthood until 1996. The reason was his bearing, his air of distinction, the appearance of someone to whom respect needed to be shown. On the first occasion he was wearing a dark blue suit and on the second dressed immaculately as Sir Thomas More – it was a fancy dress party – but even if he’d been wearing jeans and a t-shirt I doubt I’d have addressed him as whack, let alone expressed a disapproving opinion with regard to his tie, as the other George famously did during their first meeting at Abbey Road in 1962.
So it is to his immense credit that instead of balling them out after George’s remark or – more importantly – when they showed a distinct lack of enthusiasm for recording ‘How Do You Do It’, the promising Mitch Murray song, he overlooked what was in reality a precedent-setting infraction of music biz protocol and allowed his new signing to record their own ‘Please Please Me’ instead, at the same time suggesting a change in tempo and arrangement. A few weeks later ‘Please Please Me’ became The Beatles’ first number one (‘How Do You Do It’ was also a number one, of course, for the far less intractable Gerry & The Pacemakers) and a lesson was learned by one and all. George Martin would give The Beatles their rein but at same time chip in where he thought his considerable skills as a trained musician might help. In return The Beatles would treat Martin as an almost-equal partner in the studio but never as a sergeant-major who must be obeyed. It was the ideal creative relationship but it would never have happened if Martin hadn’t been flexible when faced with this potentially destructive early skirmish.
There’s a lot more to be said about George Martin than this of course and I’m sure the tributes will flow tomorrow, along with far more comprehensive accounts of his life and achievements. Nevertheless, I believe that alongside the many other instances when Martin’s musical skills, generous devotion to duty and persuasive diplomacy smoothed The Beatles’ progress, this early example of good judgment over ‘Please Please Me’ was crucial in establishing the mutual respect that became the key factor in the alliance between him and the greatest pop group of them all. We have much to thank him for.
RIP Sir George.

I think the photo I took from the internet is of J, P, G & R with George M getting their gold disc for ‘Please Please Me’. Looks like it from the length of their hair.