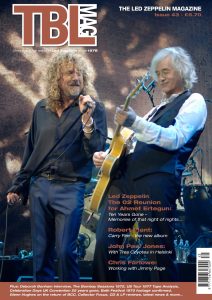 Back in the far off days when Led Zeppelin welcomed me into their midst I learned from favoured photographer Neal Preston that there was only one brief moment in their entire show when it was possible to get a shot of Robert Plant and Jimmy Page in the same frame. It was during the chorus of ‘Whole Lotta Love’, invariably the encore, when Page would sidle up to Plant and stand alongside him, the two of them yelling the three word title together before Page skipped off to Robert’s left and redoubled his efforts on guitar.
No such problem seems to have inconvenienced Ross Halfin, whose shot of the two of them together at the 2007 O2 Reunion Concert graces the cover of the latest Tight But Loose, my pal Dave Lewis’ state-of-the-art Led Zep fanzine, still going strong after almost 40 years of chronicling all things Page, Plant, Jones and Bonham. Ross is Led Zep’s favoured photographer these days and was one of only two permitted to shoot the show on December 10, 2007, officially promoted as a tribute to Atlantic Records founder Ahmet Ertegun but in reality dwarfed by Led Zeppelin’s decision to reunite, Page, Plant, Jones and, taking his dad’s place at the back, Jason Bonham closing the show with a 16-song set that was later released as a two-hour movie and a double CD, both titled Celebration Day.
Dave’s report on the event 10 years later in TBL 43 emphasis the sense of occasion as much as the show itself, not least because he went through a few hoops to get his tickets and was mighty relived when Robert Plant – always a firm supporter of TBL – sorted out tickets for him. I dread to think how much Dave would have paid a tout if Plant hadn’t come through, but knowing Dave as I do he’d doubtless have mortgaged his house for a ticket – to the inexorable mortification of the long-suffering Mrs Lewis.
Elsewhere in this issue of TBL you can find an exclusive preview of Robert Plant’s forthcoming album Carry Fire, a report on Paul Rodger’s Free show (for which he was backed by Deborah – sister of John – Bonham’s band), interviews with Deborah and Chris Farlowe (who talks about young Jimmy Page), a run down of bootleg tapes from the group’s 1977 US tour and everything you ever wanted to know about the recordings made by Robert and Jimmy in Bombay in 1972.
Finally, there’s some hindsight recollections of the first ever Led Zep Fan Convention that Dave and fellow fan Andy Adams organised 25 years ago at a hotel in Bloomsbury. I was a quest speaker, alongside former MM colleague Chris Welch and two Zep roadies Mick Hinton and Phil Carlo. Hinton, of course, had the unenviable job of accompanying John Bonham across America, a taxing mission to say the least, while Carlo worked with Zep at a late stage in their career and then with The Firm, the post-Zep group that Jimmy assembled with Paul Rodgers. Hinton and Carlo both seemed to me like battle-scarred warriors of Peter Grant’s mercenary army, a bit wild, certainly uncontrollable and after a few drinks on another planet entirely from the fans who gathered to hear us talk. Chris and I were a step down in terms of full-on Zep experiences but well do I recall the Q&A session when I was asked by fans about my Led Zeppelin memorabilia collection.
“What memorabilia collection?” I asked.
“Tour tee-shirts, backstage passes, press photos, tour documents…”
“Oh that stuff. I wore the tee-shirts out and threw all the rest away,” I replied. “I didn’t hang on to all that stuff.”
“Why not?”
“Because it was worthless in those days. No one believed that 40 years later it would have some value.”
Hinton, Carlo and Chris Welch all nodded sagely. All of us had thrown out what we had. And all of us realised that if we hadn’t the fans at this convention would have bought it off us in a shot.
Which I suppose is why Dave Lewis can continue to produce a breathlessly enthusiastic full-colour 32-page magazine three or four times a year on a group whose original line up played their final show together 37 years ago last July. Breakdown of communication postponed indefinitely I guess.
Posted by Chris Charlesworth

This is a great post. Your Blog the very informative i have learned some information about your blog.
https://www.lcrenovation.co.uk/loft-conversions/
House Renovations in Brixton