In the past 24 hours Just Backdated has received its 400,000th hit and, coincidentally, this is my 600th post, all since I launched the blog at the beginning of 2014. As regular visitors will know, I’ve slowed down a bit this past year but, conversely, the frequency of hits has accelerated, so it’s taking less and less time to pile them on.
As ever almost all the most-visited posts relate to The Who, number one still the post about Keith being photographed with John and Paul Beatle in 1974, now on an unassailable 13,896 hits, more than twice the post at number two. Surprisingly, leaping in from nowhere, the current runner-up is the post about Who manager Kit Lambert’s palace in Venice that I wrote in February this year, and which has accumulated 5,409 hits in just over six months. Almost all my Who-related posts have exceeded 1,000 hits, most of them between 2 and 3,000, largely because they’ve been linked on The Who’s own Facebook page. As a result of this the average hits per post (666.66666 etc) is skewed, since the vast majority get far less while the heavy hitting Who posts send the average up.
Not surprisingly, nine out of the top ten posts are Who-related, the exception being the one about Robert Plant visiting Jimmy Page for the first time at his house in Pangbourne in 1968, an extract from Omnibus Press’ forthcoming Page biography that I posted in July and which was shared on Dave Lewis’ Tight But Loose Led Zep page. Other non-Who posts with 1,000 or more hits include a couple on Abba (shared by my Stockholm-based Abba expert pal Magnus Palm on his Abba-related website), and one each on Jimmy Page, The Beatles, Rory Gallagher, Deep Purple, Wilko Johnson, Little Feat, Marianne Faithfull, Jeff Beck and David Bowie.
It is also pleasing to note that my obituary of Graham ‘Swin’ Swinnerton, Slade’s tour manager, has clocked up 1,781 hits, more than all my other Slade posts put together, while posts on Peter Rudge (Who/Stones manager) and Chas Chandler (Hendrix/Slade manager) have also registered more than 1,000. This suggests that Just Backdated readers are as interested in those who manage rock careers as those who actually have them. Similarly, posts about Kit Lambert have exceeded 1,000 and last Friday’s post about Bobby Pridden, The Who’s sound engineer, is already on 1,200 and rising.
Bubbling under the 1,000 mark are posts on Ray Davies, George Harrison, Dennis Wilson, Rolling Stone photographer Baron Wollman and, curiously, the one about the book on the Bradford City FC fire in 1985, the only non-music post to attract much attention.
In August I noticed that I was getting a massive number of hits from Russia and to mark this did a post about the Russian rock book Back In the USSR by Artemy Troitsky that I commissioned and edited in 1986. No sooner did I do this than the hits from Russia stopped, virtually overnight. It was as if I had caught someone snooping and when they were found out did a hasty retreat; quite sinister. Nevertheless, they can’t erase the hits, so Russia takes the Bronze in the Page Views By Countries list after the US (170,151) and UK (89,093). Russia is at 19,465, almost all clocked up in July and August this year, and thereafter it’s Canada (13,911) and Germany (11,063) with the next five (France, Japan, Australia, Ukraine and the Netherlands) all in five figures.
Once again, thanks to all who’ve visited Just Backdated. At the moment I’m a bit tied up on other projects to post with the regularity that I once did. I have vague plans to combine all my Who posts into a book of some kind, with new material that I’m working on as a sort of summary of my long relationship with them. I have two other books in the works, one a novel, the other a co-author job with an industry figure, and I’m also still editing books for Omnibus Press, among them a definitive account of The Monkees and a book on Prog Rock, with more to come next year including, I hope, books on The Damned, Slade and Steve Howe. Never a dull moment - and what an eclectic bunch.

BOBBY PRIDDEN - Here's To A Long And Happy Retirement 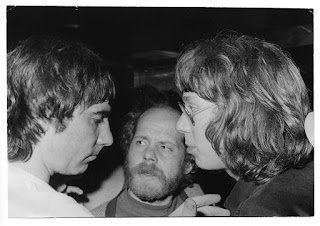 
It has been brought to my attention that Bobby Pridden, The Who’s long lasting, loyal and oh-so dependable soundman is to retire from roadwork on doctor’s orders. It’s a bit of a cliché to describe roadies as the ‘fifth (or sixth) member of the group’, as Neil Aspinall was so described with The Beatles and Ian Stewart with The Rolling Stones, but no one deserves this title more than Bobby as far as The Who are concerned. Like Nell and Stu, Bobby was no mere roadie, of course, and I understand he'll still be on call if needed in the studio.


And now for something completely different…

** This was a lie. I don't believe Brian even held a driving licence. Still, it was funny at the time, albeit grossly irresponsible of course.
Posted by Chris Charlesworth 6 comments: