To Brighton for a Blondie concert and the realisation that what I’ve missed the most during the Covid-induced famine of live gigs is the feeling you get in your chest from a loud electric bass, the deep-rooted foundation of a rock band in action as they deliver their songs in the best way imaginable. To a certain extent I can recreate vocals and wailing guitars on my hi-fi system, and even the drums if I punch up the volume, but no way can I reproduce the boom of a Fender Precision plugged into a big amp and big speaker cabinet, then dispatched through a PA system into a decent-sized auditorium such as Brighton Centre.

It helped that the bass in question was wielded, deftly but unobtrusively, by Glen Matlock, the Sex Pistol jettisoned from the group for displaying too much in the way of musical chops yet lacking the tone-deaf nihilism of his successor. Glen went on to other bands and also became a bass man for hire amongst his peers, and a very good one too, but his arrival in Blondie – at three weeks’ notice, he tells me – came as a bit of a surprise, though it evens out the generational divide between the three younger members of the group as it is now constituted, and the two older hands, singer Debbie Harry and unrelenting drummer Clem Burke. 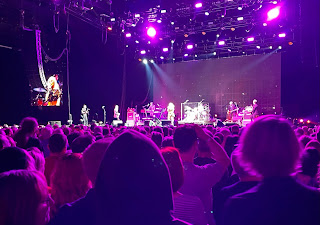 With founder, principal songwriter and guitarist Chris Stein taking a sabbatical on doctors’ orders, it is left to Tommy Kessler and newcomer Andee Blacksugar – what a great rock’n’roll name – to handle the guitar duties between them, switching leads and generally adopting a sort of twin guitar duo role that reminded me a bit of the sparring that went on in Lynyrd Skynyrd. Both sing well, as does keyboard player Matt Katz-Bohen, and Glen chips in a bit too, so the vocal backdrop to their revered singer is never less than imposing.

But the spotlight, as ever, is on Debbie. Remarkably, this foremost New York punk siren, graduate with honours from CBGBs, turns a mature 77 in July but rather than occupy a rocking chair with a cat and bundle of knitting in her lap she prefers to rock the stage dressed in red leopard-skin tights and a black bin liner held in place with a wide red belt, her blonde hair flying wildly in all directions, her poise as energetic and turbulent as ever. Debbi’s voice remains clear and strident, though she wisely eschewed straining for some of the top notes in the group’s gold-plated catalogue of hits. Thankfully, she abandoned her sunglasses midway through the show so we could see her still-handsome features in close up on the video screens each side of the stage and, having taken the measure of the audience, she seemed sincerely delighted to be singing her songs again after the Covid postponements, grateful that Brighton’s Blondie fans turned out in such large numbers to see her band. 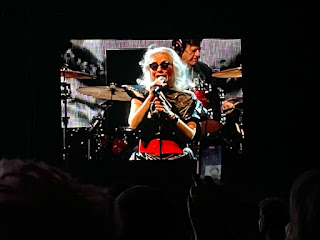 It was, by and large, a greatest hits show, accompanied by plenty of imaginative, occasionally quirky, personalised graphics on a large screen at the back. I liked how King Kong’s great paw held Debbie, the Lichtenstein comic and op-art style visuals, and the footage of the group from their Parallel Lines days. Someone had even drawn a glass heart that smashed into smithereens.

The concert opened with ‘X-Offender’ and closed, just over 90 minutes later, with ‘One Way Or Another’. The sound was fat and ballsy and well-mixed throughout, the band well-drilled, the set clearly and cleverly rehearsed to align with the visuals. Of the generous 21 songs delivered, 15 were from the 1970s, with the remaining six, among them ‘Maria’, including only two, ‘Long Time’ and ‘Fragments’, from their most recent album, 2017’s Pollinator which they promoted heavily on their last UK tour the same year and which I rated very highly. I wouldn’t have complained if they played two or three more from it.

Still, it was the hits the crowd wanted, and they weren’t disappointed. After ‘Sunday Girl’, ‘Picture This’ and ‘The Tide Is High’ there was a slight lull during ‘What I Heard’ but the concert moved up a gear during ‘Atomic’, Debbie inciting a mass singalong on that lovely ‘Oh, your hair is beautiful’ line, and thereafter she never looked back. Some songs were neatly segued together, ‘Fade Away And Radiate’ into ‘Tide’ – which featured two unexpected grungy solos - and ‘Shayla’ into a power-packed ‘Union City Blue’. The four-song pre-encore hell-for-leather ride through ‘Rapture’, ‘Maria’, ‘Dreaming’ and ‘Heart Of Glass’, heralded by jungle drums, seemed like a knockout blow, but they returned for four more, ‘No Exit’, ‘Fragments’ – an odd choice in the light of its complexity – ‘Call Me’ and ‘One Way Or Another’, another mass singalong. At this, the ninety-minute mark, I couldn’t help but be impressed by Debbie’s stamina and, of course, Clem’s unrelenting assault on his drums, a pace he sustained throughout with characteristic resilience.

The 2022 Blondie tour visits Hull tonight then five more UK cities before transferring to America’s west coast, Mexico and, in August, some big shows in the east, including a couple in their native New York. If what I saw in Brighton last night is anything to go by, there’s still plenty of life in Blondie, with or without founder Chris Stein.

Finally, I should add that due to slow service in a burger joint on nearby Duke Street, we regrettably missed most of Johnny Marr’s opening set but the four songs I heard, among them ’How Soon Is Now’ and ‘There Is A Light A Light That Never Goes Out’ sounded terrific and, as ever, the former Smiths guitarist looked great too.

Email ThisBlogThis!Share to TwitterShare to FacebookShare to Pinterest
Labels: Blondie 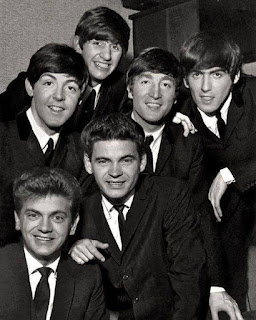 Watching Fake News: A True History, an appropriately droll documentary presented by Private Eye editor Ian Hyslop on BBC4, the other night reminded me of this picture which I saw on the internet recently and was puzzled as to when and where it was taken. As far as I could establish from the many reference books on my shelves, The Beatles and The Everly Brothers never performed on the same show together, either on stage as part of the same bill, or on a TV show, either here or in America, or anywhere else for that matter.

Then a friend more knowledgeable than myself told me it was faked. The Beatles in this shot, he told me, were posing backstage in late 1963 at the Finsbury Park Astoria where they appeared in ‘The Beatles Christmas Show’ for 16 nights, closing on January 11, 1964.

He didn’t know where the picture of the Everlys came from but I discovered from my own research that it was taken in London by Harry Hammond, probably in 1960 though the two sources I found were inconsistent with the year. Hammond, who died in 2009, specialised in photographing the British pop scene from the 1950s onwards, becoming NME’s primary photographer for several years. 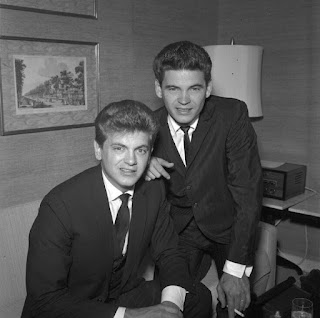 The Everlys toured the UK for the first time in April 1960, and other shots from the same session show them on a hotel balcony with the skyline of London behind them. According to Mark Lewisohn’s Tune In book, George Harrison caught them on April 25 at The Liverpool Empire when they were backed by The Crickets, sadly lacking their leader Buddy Holly, a victim of the 1959 plane crash that also claimed Ritchie Valens and The Big Bopper.

Despite the overwhelming evidence that The Beatles, especially Paul, were heavily influenced by The Everly Brothers, there are only two recorded examples of the Fabs covering the Everlys. On the first BBC sessions album George sings ‘So How Come (No One Loves Me)’, one of Boudleaux and Felice Bryant’s lesser songs, recorded by Don and Phil for their A Date With The Everly Brothers LP in 1960, and in the recent six-hour plus Get Back movie, The Beatles jam for just over a minute on ‘Bye Bye Love’, with John taking the lead. Again thanks to Mark Lewisohn’s book, I learned that ‘Bye Bye Love’ was released in the UK on July 5, 1957, the day before John first met Paul at the church fete in Woolton. Much later, of course, Paul wrote ‘On The Wings Of A Nightingale’ especially for the Everlys, released in 1984.

A bit more digging divulges that the picture was probably faked for the cover of a slim paperback called The Everly Brothers & The Beatles, by Mandy Rennie which I suspect is a pseudonym. The evidence for this assumption is there for all to see on Amazon which advertises scores of slim paperback books by Ms Rennie, about celebrities from all walks of life, film, music, politics and sport. Oddly, all of them were published by Blurb Books on the same day in 2019!