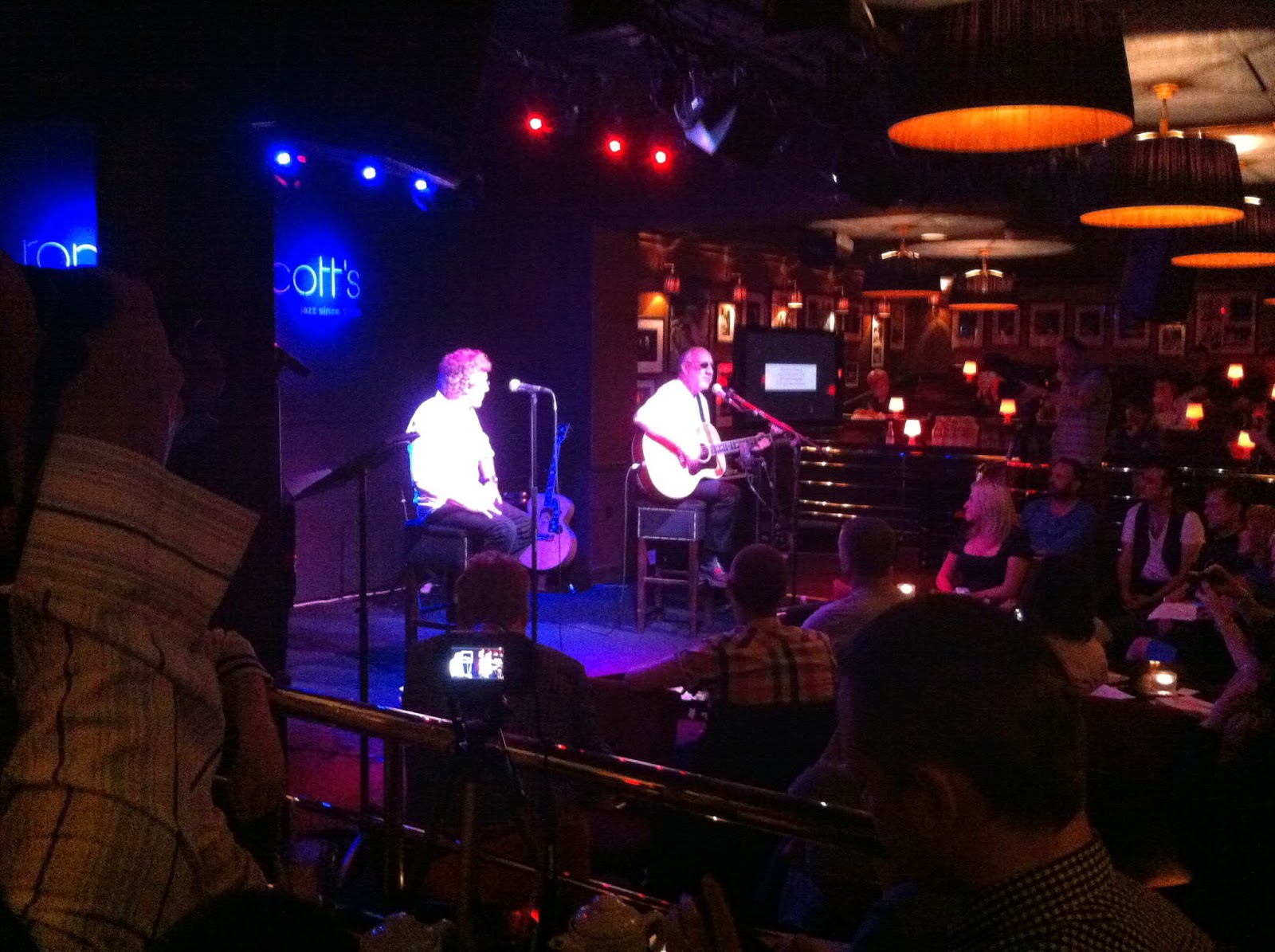 Never quite knowing what the day will bring and having already had a post for today (the last Cat Stevens book extract) already prepared, I find myself doing two posts in one day, as at lunchtime I was at Ronnie Scott’s jazz club in Frith Street in the heart of Soho for a press conference called by Messrs Daltrey and Townshend to announce a December UK tour by The Who, to hear them play four songs together and do a brief Q&A in front of assorted press.
It’s the 50th anniversary tour, nine gigs announced so far, details of which you can no doubt find on The Who’s website. Fifty years ago today The Who played at the Railway Hotel in Harrow, and the last time they were at Ronnie Scott’s was on May 1, 1969, when they premiered Tommy. Today Roger and Pete take the stage after a brief film made up from highlights of their career which, at first, had no sound. Someone had kicked a jack out. “Probably me,” said Pete.
They make a great duo, as well they might after 50 years, and played ‘Substitute’, ‘Bargain’, ‘The Kids Are Alright’ and ‘Won’t Get Fooled Again’, harmonising together; Roger with an emotional depth to his voice that rings out very clearly in this small club, Pete playing rhythm as only he can, chords zinging away on a 12-string for the first two numbers and a blonde Gibson J-200 for the other two. ‘Kids’ seemed especially poignant in this setting. During ‘Fooled Again’ I became aware of someone close by stamping his foot in time, very hard and very much in time in fact, and looked across to see that it was Zak Starkey, hopefully now reinstalled into the touring group.
“This is the beginning of a long goodbye,” Roger was quoted as saying in a press release and when asked to expand on this he replied, “We can’t go on touring forever. My voice won’t last for ever. I think we’ll stop touring before we stop playing together.”
“The heroin, the cocaine, we just can’t do it anymore,” quipped Pete, who went on to suggest that the set lists for this tour may contain songs from the deeper recesses of their catalogue. “‘Dogs Part 2’, ‘Dogs Part 1’, ‘Now I’m A Farmer’.” I think he was joking there too.
“Why do it?” someone asked.
“I want to do it,” said Pete, sounding very sincere. “Sometimes I don’t but this time I do. It’s a significant anniversary.”
“I’m making the most of it while I can,” said Roger.
“We like that people want to see us. This is what we do,” added Pete before rounding on a Guardian reporter with an unprintable tirade about the on-line comments found on the paper’s website. The question concerned whether or not they might record together again to which Pete responded that he’d sent Roger three demos fairly recently, so the answer was yes.
Both were in great spirits, Roger clearly delighted by the response to his album with Wilco Johnson, Pete as good natured as ever, chatting to me about his son Joe before he went on stage. Funny that. I was talking to Roger about his kids earlier. Once upon a time I talked to The Who about their music and smashing guitars. Now I talk about how our kids are alright.
I took the picture myself.
Posted by Chris Charlesworth 10 comments:

The second part on my chapter about Yusuf's early career.


On “Folk music” he said: “That’s where I came from. I still have a tinge in me. The sort of melody in folk songs used to get me – when I write a song it’s the melody first. I used to write folk songs and maybe I’ll release them on an EP. I was never really accepted in the folk world because I was too progressive – they only want Dominic Behan and the traditional stuff. Next year they will be singing the same things and the year after. I can’t stand that.”
Posted by Chris Charlesworth 3 comments:

When I was commissioned to write my book about him in 1984 I tracked Cat Stevens/Yusuf Islam down by asking after him at the Mosque in London’s Regents Park. It turned out he had an office on Curzon Street and I went to meet with him there. Fortunately he remembered me from my days on Melody Maker when I interviewed him a few times. He didn’t want to be interviewed for the book but he agreed to check over the manuscript and he told me a bit about his life after he retired from music. He was emphatic that he wasn’t a ‘recluse’, as the press had termed him.
As a musician, Stevens is best known nowadays as the one-time sensitive balladeer whose hugely successful albums Tea For The Tillerman and Teaser & The Firecat are widely regarded as masterpieces of the confessional, singer-songwriter genre. Before that, however, he was a rather precocious, velvet-suited pop singer who, unusually for the time, wrote his own material. This extract from my long out-of-print book covers this, lesser known, period of Stevens’ life and career. Born Steven Georgiou, he’s just adopted the stage name Cat Stevens, though everyone still knows him as ‘Steve’, and he’s spent the last few months knocking on music industry doors during the day while working as a waiter in his father’s Greek restaurant near London’s Cambridge Circus in the evenings…