On Sunday, June 16, 1974, I was at the O'Keefe Centre in Toronto for the third night of David Bowie's Diamond Dogs tour. Nowadays theatrical presentations of rock and pop are nothing special. Peter Gabriel has been acting out his songs for years, Kate Bush did it in 1979 (and will probably do it again in August) and Madonna opened the floodgates for all manner of wannabes to present their music alongside dancers, props and everything bar the kitchen sink. It could be argued that Alice Cooper started it all but, compared to what David did on this tour, Alice was a Punch & Judy Show. David never repeated this kind of concert and, of course, it never reached the UK, though it was filmed for a seldom-seen documentary called Cracked Actor.
If my report below, slightly edited from the original, sounds a bit breathless, that’s because this kind of presentation was so new that I was pretty much overawed by it. Also, it being a Sunday night I had a write up my longish review very quickly, in longhand on hotel notepaper, then wait until about four in the morning to call London (9am UK time) and dictate it over the phone to a secretary. We’d progressed from carrier pigeons but e-mails were as remote as Bowie himself. It filled page three of that week’s MM as I recall. (I found the pic below on the internet, from the show I saw, photographer unknown.) 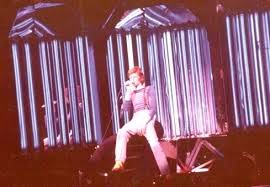 It could be argued That Screaming Lord Sutch started it all.... But then again he probably nicked it from Jay Hawkins.

I probably read this review "back in the day", sat in a cramped, dark Liverpool bedsitter, post art college daydreams, pre professional responsibilities. At that time whole albums would be previewed on the radio (Alan Freeman?), so everyone held tiny microphones from portable cassette recorders to the speaker and sat in absolute still silence for the duration. In that way I played a rough cassette constantly of Diamond Dogs til the album was released. It became my favourite Bowie.

When David Live was released I liked that even more. At first it was weird to take, having seen the Aladdin Sane tour. But the reworked back catalogue sat well alongside the new album tracks, and it was only through articles like yours we ever got to imagine what the whole presentation would have been like.

I wonder how much footage apart from Cracked Actor exists that we’ve never seen. In those days many cameras were only able to shoot very short sequences.

Thanks for posting, Then and Now.

Thanks Ian. I take your point about Lord Sutch, and Hawkins. I reviewed Diamond Dogs for MM but such was the preciousness surrounding Bowie that I was summoned to Mainman's offices in NY to listen to it (once) and not even allowed to take notes, let alone tape it. The sole reason for this attitude was to create the impression that DB was somehow in a league of his own. The upshot was that the review was a bit patchy, incomplete, as I recall. I though he was surrounded by idiots. Loved DD all the same though.

I remember a lad at school bringing that article in and us all poring over it in the playground because, if memory serves, that was the first time any of us had seen pictures of the 'new look' (ie non-Ziggy looking) Bowie. Great to read that again. All the best