THE WHO - A Couple of Book Reviews

In my ongoing mission to include pretty much everything I've ever written about The Who on Just Backdated, here are a couple of rather belated book reviews I wrote when each book was first published. 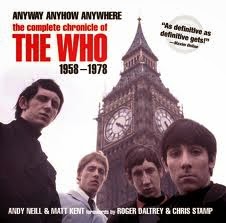 Perhaps because of Pete Townshend’s own literary aspirations, The Who have been unusually well served by biographers and chroniclers. From the first, Gary Herman’s The Who (Studio Vista, 1971) to the latest, Andy Neill & Matt Kent’s Anyway, Anyhow, Anywhere: The Complete Chronicle of The Who 1958-1978 (Barnes & Noble, 2002), the standard has been generally high and, occasionally, awesome. Into this rarefied category, which includes classics like Richard Barnes’ The Who: Maximum R&B (1982), Dave Marsh’s Before I Get Old (Plexus, 1983) and Tony Fletcher’s Dear Boy: The Life of Keith Moon (Omnibus, 1998), we must now welcome Neill and Kent’s Chronicle, which renders all other Who chronologies redundant at a stroke. It is to The Who what Mark Lewisohn’s Complete Beatles Chronicle was to the Fabs, with the added attractions of scores of colour photographs and a creatively superior design.
Like all the best rock chronologies, Anyway, Anyhow, Anywhere is obviously a labour of love. Neill and Kent might have glanced at previous Who diaries but, trusting nothing and no-one, they started from scratch, researching and confirming everything for themselves to build up a massive (12”x12”) and relentlessly accurate 304-page dossier that recounts everything of note in The Who’s career, from their initial stirrings as The Detours to the death of Keith Moon. Along the way they’ve unearthed a wealth of previously unrecorded trivia, like details of The Detours 1963 demo sessions, Keith’s first serious band (Mark Twain & The Strangers) and information gleaned from early booking agent Bob Druce’s personal diaries.
The Who worked their butts off in the sixties, clocking up anywhere between 250 and 300 gigs a year in 1965 and 1966 alone. They did this because they needed the money, not least to fund their notoriously laissez-faire attitude towards equipment maintenance, and it turned them into a well-drilled fighting machine capable of taking on the world. Chronicle leads the reader through all this, year by year, day by day, and many of the precisely captioned photographs are either seen here for the first time or so rare that it feels like that.
Opening with prefaces by both Roger Daltrey and The Who’s early co-manager Chris Stamp, each year in Chronicle is introduced by an overview of the Who’s career and place in the scheme of all things rock and pop. In some respects it does tend to replicate information previously included in The Who Concert Files (Omnibus, 1997) by Joe McMichael & Jack Lyons, though I’m assured by the authors that mistakes in the Concert book have been rectified here. The only other quibble I have is that in placing text over artwork, the designers have occasionally rendered paragraphs quite difficult to read.
But these are minor complaints in what will doubtless stand for all time as the definitive record of Shepherds Bush’s finest. 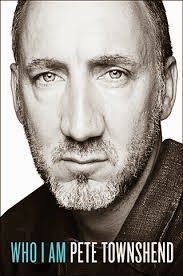 As you might expect, Who I Am, Pete Townshend’s autobiography was a book I had been anticipating keenly, but came away from strangely dissatisfied. I bought it within a week of its publication in 2013 on Amazon for, I think, a fiver which puzzled me as it was a hardback with an rrp of £20, so the sudden reduction in price was an omen that something wasn’t quite right about it.
Well, it’s OK, but not as great as I had hoped and certainly not as great as Life, Keith Richards’ fantastic ghost-written book that came out in 2011. I suspect the reason for my disappointment with Pete’s book can be put down to editing for it seemed to me as if someone had hacked away at it clumsily, and in so doing lost passages about The Who’s early career, skewed the chronology here and there and diminished its literary quotient. We all know that Pete is amongst the most literate of rock stars but only occasionally is this apparent in Who I Am.
On a more prosaic level, I was disappointed that more attention was paid to the acquisition of boats than his feelings about Keith Moon and John Enwistle; similarly there was far more about Iron Man than any of the Who’s ground-breaking albums of the sixties and seventies; and although his publishers may have requested Pete ‘sex it up’, a disproportionate amount of space is given over to the romancing of numerous women, all of whom are young and beautiful of course. There was plenty of confessional stuff – drink & drugs – and although I had an inkling about it I was shocked to learn the full extent of John’s pitiful financial situation which led to The Who touring again in the new millennium. Thankfully, the child porn business is dealt with honestly and kicked into touch once and for all.
Overall, though, there’s a sense of the poor misunderstood rock star about the book and though PT’s life has certainly been one far less ordinary than most, I was hoping for a book that was extraordinary. Unfortunately it wasn’t.

First I want to say how much I enjoy you sharing your stories, recollections, insights and wit on this site. It's always an enjoyable read.

I am driven to comment regarding Who I Am. Like you, I was disappointed by the book. I confess that I never read the book. Instead I got the audio version and I had Pete read the whole thing to me over the course of time. After I was done I considered if I liked the book or not and/or what I wanted out of it.

I loved having Pete read the book.
I love hearing him speak and telling his story.
Many of the stories I had heard in one way or another thru the years. There are others that I never had heard of course.

Cons:
It sounded often as if he was transcribing his diaries.
Skipped over many years, tours, events or short changed telling the stories in greater detail.

Biggest peeve:
For myself, I hoped that parts of the book would deal with the songs. The writing of them. The meanings of them. The actual creative process. For one of the most creative artists ever, he shared very little of that and whatever he had was as I recall, previously told tales.

I think for many of us, the songs are what draw us to The Who or Pete specifically. I want to know more of what influenced or created them. He told some of those stories, Sensation, Sally Simpson, Who Are You, Cache Cache, but I wanted more.

Anyway, I could go deeper, but I figured I would comment with my own high level critique. I liked Who I Am, but I am left wanting more. I wonder if it was in the hundreds of pages that were edited away...

I'm pretty sure a great deal was edited out. Publishers are sometimes reluctant to put out very long books as they feel their size might put people off, but speaking from experience it didn't prevent Dear Boy or Life from doing very well nor, for that matter, Mark Lewisohn's Tune In from exceeding its publisher's expectations. Anyway, thanks for your comments Richie.

I have been a Who fan since the very beginning, and was thrilled when Pete's book was published. But I agree with everything you've said -- it was a catalog of the boats he bought and the beautiful women he cheated on his wife with. The big "shocker" was his molestation as a child, but I read and re-read the chapters on his early life, and really couldn't find anything so terrible or life-changing. What a wasted opportunity for a man whose songwriting was (and continues to be) so brilliant.

There is a chance you are eligible to receive a $1,000 Amazon Gift Card.