CAT STEVENS IN THE JUNGLE

Good Men In The Jungle sounds like the name of a band with one foot firmly in the indie camp and the other in Afro beats but in reality they are the guitarist Alun Davies and his daughter Becky, and tonight, as they do three or four times year, they'll be playing at the Compasses Inn in Gomshall, my local Friday night haunt where the music is free though a fiver in the hat when it’s passed around during the last half hour is much appreciated.
I mention this because Alun and I go back a long way, to when he was Cat Stevens' guitarist at the time when Steve – now Yusuf Islam – swopped ‘Matthew & Son’ for ‘Lady D’Arbanville’ and became a sensitive singer songwriter. For about four years between 1970 and ’74, he was the UK’s premier troubadour, his tight jeans, dark curls and olive-skinned complexion much appreciated by the fairer sex. His albums Tea For The Tillerman (1970) and Teaser And The Firecat (1971) were both worldwide multi-million sellers, as was Catch Bull At Four (1972) which reached number one in the US, but diminishing returns thereafter, and dissatisfaction with fame, convinced Steve to take a different path in life.
Alun still plays with Yusuf when the occasion arises, which isn't all that often these days, and he played on Yusuf's 2006 album An Other Cup, the release of which took most people by surprise since everyone thought he’d long ago abandoned a music career that was incompatible with the religious vows he took on converting to Islam in 1979. Earlier this month, however, things turned a full circle when Yusuf, as Cat Stevens, was inducted into the Rock and Roll Hall of Fame, something that probably took him a bit by surprise, as he suggested in his induction speech: “… considering that the judges have actually voted for someone who doesn't drink, doesn't smoke and, you know, doesn't throw televisions out of hotel rooms and only sleeps with his wife. I'd say it was a very brave decision, and one which was unexpected, and strangely, outrageously rock and roll! Peace!”
I interviewed Steve, as he then was (no one ever called him Cat), a few times for MM, encountering Alun in the process, and in 1981 wrote a book about him which today is difficult to find and fetches silly money on Amazon, largely because there’s nothing else on him out there. “Never was there a troubadour more handsome than Cat Stevens, nor a career so coloured with romantic stories and downright peculiarity,” I wrote in its introduction. “What’s there to say when a man of wealth and talent renounces all for religion: how do you equate a once lusty pop star with the rigours of Islamic devotion?” 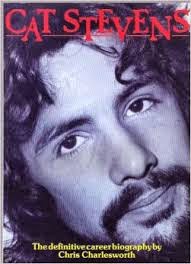 To a degree, Yusuf co-operated on this book, reading through the manuscript, making certain changes and filling me in on his life as it stood in 1981. I had a few meetings with him at an office on Curzon Street and was obliged to leave my shoes at the door. Also, the meetings were interrupted by prayer sessions when Yusuf and his staff would retire to another room for 15 minutes or so, leaving me to twiddle my thumbs while they paid their respects to Allah.
About ten years ago I wanted to put the book back into print but needed to get Yusuf’s green light before doing so. After a bit of umming and erring, he decided he didn’t want it in print again, nor to take up my alternative suggestion to allow me to write a brand new book with his co-operation. Always gracious, he explained to me that he felt more comfortable out of the spotlight and was unhappy at the way he’d been portrayed in the media over the years. Because there is no Muslim equivalent of the Archbishop of Canterbury or the Pope, whenever they needed one the media invariably turned to him as a spokesman on Islamic matters, purely because he’d once been a pop star and was therefore the most prominent Muslim in the UK, at least to non-Muslims. It was not a role he wanted and one he wanted to shake off. A biography, he reasoned, would make this more difficult.
I tended to agree with him, so no new biography has ever appeared, though I have no doubt that the rather peculiar circumstances of his life and the many issues surrounding Muslims in the UK would make for a commercially successful book. Since his life outside music is largely an unknown quantity yet would need to be covered in some detail, no such book could be written without his co-operation.
So once again tonight I’ll enjoy Alun and Becky doing their set of Everlys covers, Dylan and Band songs, country ballads and the odd Cat Stevens’ number – they do a lovely ‘How Can I Tell You’ – in the Compasses, and when they’re through have a beer with Alun and rue the book that got away.
I’ll also post a few extracts from my book and an interview with Cat Stevens on Just Backdated in the next week.
Posted by Chris Charlesworth

Great blog! I will never forget when I found your fabulous biography in the book section at Sam's the Record Man in downtown Montreal. I would guess the year was 1984 because I bought it at about the same time I bought the "Footsteps in the Dark" LP which came out that year. I remember reading your book cover to cover (well almost) on the bus ride coming back to my suburb. There was so little information about him at that time, so the book was a welcome breathe of fresh air.

I'm surprised that Yusuf wouldn't agree to a reprint. That was 10 years ago you say? I think you'd get a different answer today. I believe he mentionned on Facebook not too long ago that he would love to put a biography out.

I have been looking for a copy of that book for many years, but so far without luck. I had the good fortune of meeting "Cat" at his parents restaurant many years ago, he was working on "Back to Earth" at the time. I had no idea that was going to be his last commercial release as Cat Stevens. He certainly had a profound impact on my life and my decision to play guitar and write songs. And his songs still sound relevant to this day.

Start following our trades today and gain up to 270% daily.