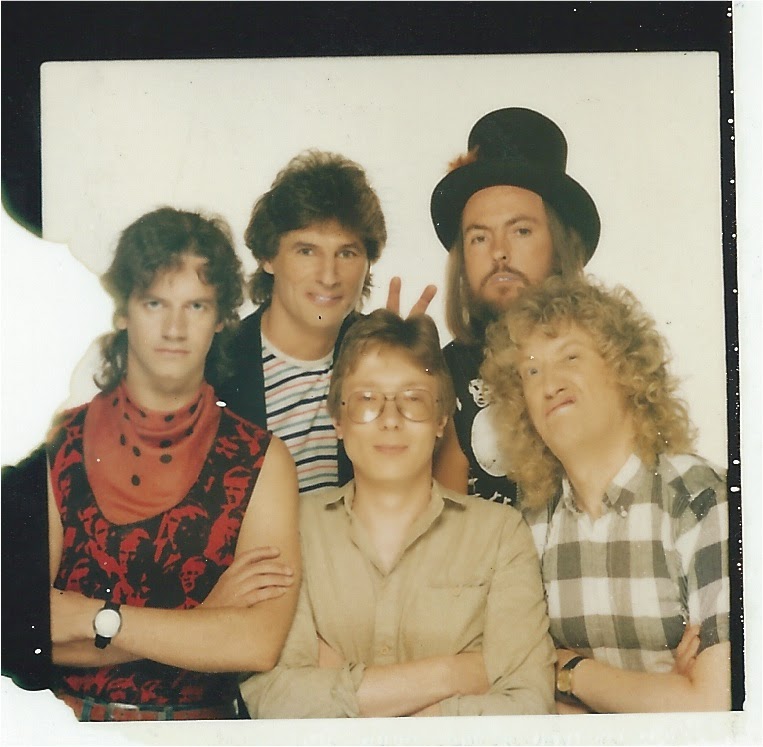 Mention of Slade yesterday prompts to me to post this picture of Noddy, Jim, Dave, Don and me taken in London in 1982, one of several Polaroids taken by Paul Cox for the cover of the book I wrote about them around that time. I slipped into this shot and we used it, or another like it, inside. Between 1970 and 1973 I watched Slade progress from next to nothing to just about everything, from an audience of eight in a club off Regent Street to 20,000 at Earls Court, from flops to a string of number one hits. I became good friends with them and their late manager Chas Chandler, and I still see them from time to time. For two decades, whenever a new Slade hits album was released I was dragged in to do the liner notes, and I mentioned this to Noddy when I last saw not long ago. “We usually release a new hits album when we get a tax demand,” he laughed.
They were a cracking live band of course, a legacy of working their bollocks off long before they became famous, and Noddy had one of the very best rock voices anywhere, but one thing I really loved about Slade was how different they were from their peers in their attitude towards fame. Not for them the delights of London’s trendy clubs and fancy hotels, expensive restaurants and ritzy limousines. When they came down to London from Wolverhampton (where they all continued to live with their mums and dads long after they hit the charts) to do Top Of The Pops, they stayed at the Edward Hotel near Paddington Station which in those days charged £4 a night and where a chicken dinner could had for £1. They travelled around the country in an old Vauxhall Velox, all four of them, with tour manager Graham Swinnerton at the wheel. They were the only band of note ever call in on me at home for ‘refreshments’, once at my flat in Bayswater (which freaked out my non-music industry flatmates I can tell you), and again in LA. That flat in London was round the corner from the Edward Hotel and after Slade introduced me to the bargain basement dining room I’d eat there a lot too.
This isn't to say they didn't know how to party. I also saw them a bit in New York when I lived there and remember a right old knees up at the communal flat they shared on the Upper East Side, all bar Don that is who lived downtown. Their wives stayed there too but I think they’d have been happier back home in Wolverhampton. Come to think of it, so would the boys.
I’ll probably see them, or least some of them, again later this month at the summer liggers lunch in Barnes. Jim doesn’t usually attend these but he and I meet occasionally in London to chat about this and that. He was always the odd one out, an enigma, the serious one, but, paradoxically, the key to the puzzle, their Pete Townshend, their John Lennon. I always loved the story he told me about turning up to audition for the other three – he was last to join – with a tatty old cheap bass guitar in a black bin liner, while all the others looking to join the band had Fenders in shell cases. Jim played the pants off them all and got the job – good job too as they’d have got nowhere without him.
Posted by Chris Charlesworth

Liverpool Art College, 1972 / 73, all myself and 2 flatmates ever seemed to put on the dansette was "Slade Alive", "Slayed?", all the Who albums, or Wings Wildlife. (We didn't like "Imagine". Far too much of a downer). Great band, until the bacofoil top o' the pops hats proved too much a distraction.

We were Slade daft as kids... Luckily it wasn't lost on my Dad... My first gig (tender age of 8) was at Blackburn King Georges Hall... June 13th 1973... Skweeze Me, Pleeze Me was riding high in the charts... We sat on the front row of the balcony looking on in wonderment... When Sladest came out we swore the back cover was taken in Blackburn! Kids you see, no idea of the fact that bands dress the same way for a whole tour... Within days Don was in hospital following a car crash, and a man who would become my pal for going on twenty five years plus (Frank Lea) was behind the drum kit in the Isle Of Man... Don of course returned... My Slade memorabilia collection is growing still... James was in my movie HELLO QUO! And I've seen the guys live through good times and bad... Having met them all personally lots... Still love them... A tattoo proves that... Underated... Way more than words can say....

Alan YOU have a Slade tattoo but no Slade movie!!! :-o
Maybe you can turn the Earls Court film into a documentary? lol
I saw Quo around '76, I must say they were amazing but Slade, they transcend superlatives. They weren't musically brilliant or technically impressive, their stage act was as simple as it got. They were just raw, down to earth and effective. ;-)