Look Away, the much-touted Sky documentary about the exploitation of girls/women in the music industry, offered chilling testimony to condemn Kim Fowley, Steven Tyler and Axl Rose but failed in its greater mission to expose a more widespread culture of sexual abuse in the rock world. By concentrating on three specific instances of abuse by these men, it rather lost the overall plot, and many others who may have been equally guilty of similar behaviour no doubt sighed with relief when the credits rolled after one hour and 39 minutes.

I have a dim recollection of attending a party in South Kensington in the early seventies at which Fowley, already notorious for his sybaritic tendencies, engaged in intercourse with a willing girl on a couch in front of guests. I was with a Melody Maker colleague whose girlfriend, appalled, dragged us both away from a scene that Prince Andrew would no doubt have considered ‘unseemly’. So, when Jackie Fuchs of The Runaways spoke during the documentary of the occasion when Fowley drugged and raped her in a crowded room, I believed her 100%.

Equally castigating, and slightly more sinister in a rather creepy way, was the evidence of Julia Holcombe who at the age of 16 became Tyler’s lover, ward – unbelievably, he got her mum to sign over custody so he could take her over state lines without being detained – fiancée and mother of a child he demanded she abort. Her evidence suggested that those who benefited from Aerosmith’s record and ticket sales were complicit in keeping all this under wraps.

Sheila Kennedy, ill-treated by Rose, was once a Penthouse pin-up, which implies she was hardly an innocent virgin, but her testimony merely added to a welter of evidence that Rose considers himself above the law as far as treatment of women is concerned. Needless to say, both he and Tyler declined to comment when asked to do so by the producers of the film. Fowley died in 2015.

These three women occupied most of the screen time. Among a handful of others interviewed was a ‘manager’ of Guns’N’Roses, a tour manager of Aerosmith, and Kari Krome, who instigated (but did not become a member of) The Runaways, all of whom backed up what the women had to say. Missing was Rodney Bingenheimer, whose English Disco was a magnet for girls in their early teens hoping to bump into rock stars in the seventies. The notorious picture of Led Zeppelin ‘relaxing’ in their midst flashed up briefly on the screen, as did many other suggestive stills taken inside or outside the club, most of which can be easily found on the internet by keying in Bingenheimer’s name. Lori Mattix, the teen model who stepped out with Bowie, Jimmy Page and others, was rather coy about it all and declined to mention names, while Bingenheimer issued a statement to the effect that he wasn’t aware of any impropriety inside his club. Of course not.

What Look Away gave us, then, was three specific examples of appalling behaviour towards young women, all of which occurred many years ago, not that this excuses it in any way. If it was the first episode in a series, I could sympathise with it more but, in reality, this was the tip of the iceberg. Most interviewees suggested it was still happening today but of evidence there was none. If the music industry is to be held to account in its own #MeToo movement, then we need a much bolder approach and, of course, a way around the 21st Century protection offered by expensive libel lawyers whose warnings no doubt prompted the producers of Look Away to blank out many faces in the photographs we saw.

THE RETURN OF ABBA 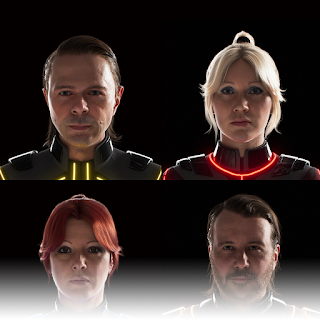 The miracle is that they don’t sound any different. Frida will be 76 in November and Agnetha turned 71 in April but their voices, especially when they sing together, sound exactly the same as they did during the seventies, as does, bar a bit of 21st Century upgrade, the musical backdrop of keyboards, synthesised strings, tuned drums and occasional electric guitar. More importantly, they still don’t sound like anyone else; nor, for that matter, has anyone else been able to sound like them since Abba disbanded 40 years ago.

The YouTube video for Abba’s new and characteristically epic ballad ‘I Still Have Faith In You’ has, as of an hour ago, had over four and a half million views since it appeared on the internet last night. The video for their other new song, ‘Don’t Shut Me Down’, while slightly less impressive, has had over one and a half million. That’s all occurred in the first 24 hours since they were made available.

Packed with the sweeping surges of emotion and traces of autobiography that was the hallmark of all their best work, ‘I Still Have Faith In You’ opens with a few grand notes that put me in mind of Elgar’s patriotic works before one of the girls, in this case Frida, sings solo. There’s an unmistakable delicacy, even hesitancy, to her voice, as if the words conjure up a well of sentiment she finds difficult to express or, even now, it’s still a challenge for her to sing in the English language. On the third line – ‘There was a union’ – Agnetha unsurprisingly joins in, before Frida closes the verse: ‘Of heart and mind, the likes of which are, oh so hard to find.’ Thereafter, although Frida leads, they are regularly reunited in that familiar choral landscape only Abba could produce.

We’re less than a minute into the song and it is unmistakably Abba, gloriously melodic, chiming and poignant. Are they singing about themselves? Is the ‘bittersweet song’ they mention one of their melancholy old hits? Are the ‘memories we share’ a commemoration of their marriages, or of the group, or the long history of the relationships that Björn, Benny, Agnetha and Frida have shared? Of course, lyricist Björn will never confirm this – the best songs are always enigmatic – but in this way ‘I Still Have Faith In You’ perfectly recreates the magic of Abba, that none too subtle blend of reality and fantasy, all folded neatly into a bravura performance that was, is and remains an inimitable Abba trait.

The song lasts just over five minutes and gradually gathers momentum, ebbing and flowing in much the same way as ‘Our Last Summer’, ‘Slipping Though My Fingers’ and ‘Winner Takes It All’, all of which share a similarity in tempo and sentiment. As it progresses, footage from Abba – The Movie, the Abba In Concert DVD and individual song videos are shown, cleverly edited at various points to suggest they are actually performing the new song. It follows a chronological sequence, from pre-Abba to The Visitors, and there’s a nod to their massive popularity in Australia with shots of the huge crowds that gathered to greet them in Melbourne.

At the 3.45 mark, theatrically accompanied by background audience cheers, we leave the familiar footage and are introduced to the much-heralded four digital Abba avatars, on stage as they soar into the uplifting final chorus of ‘I Still Have Faith In You’, this time with a underlying vocal counterpoint that blends chorus and verse, a crescendo that closes – again like other Abba epics – with the backing track dropping away for one of the girls, again Frida here, to bring it all back to where it began by soloing on a final line or two.

Less dramatic, but still unmistakably Abba, ‘Don’t Shut Me Down’ features Agnetha singing an extended prologue before the song kicks in, lively, danceable and cheery even though Agnetha has clearly had her fragile heart broken yet again. Nowadays, though, she can cope – ‘I’m not the one you knew’ – for which we can all be thankful. This is pop Abba in the manner of ‘Knowing Me, Knowing You’, ‘Mama Mia’ and ‘Take A Chance On Me’, complete with Benny’s tinkly piano and a ‘Dancing Queen’-style sliding glissando across the keys, a snappy snare and Björn, quirky as ever, rhyming ‘frustration’ with ‘transformation’. Unfortunately, the video features the lyrics only.

These two tracks are a taster for a new Abba album called ABBA: The Voyage which will be released in November. In May 2022 a series of Abba concerts featuring the avatars – or ‘Abbatars’ as Björn calls them – are scheduled for London’s Olympic Park which will be renamed the Abba Arena. The virtual Abba, which will be accompanied by a live band, will ‘perform’ songs old and new.