After a fortnight in which I seem to have done little else on Just Backdated but react to the work of the grim reaper, it’s time for some light relief and who better for this than Abba? On another post here I comment on how since they went their own ways in the early eighties the four members of the group seem to have adopted a policy of never having their photograph taken together. Well, that changed on Wednesday night at the opening an Abba themed restaurant in Stockholm, as can be seen from the two photographs below. 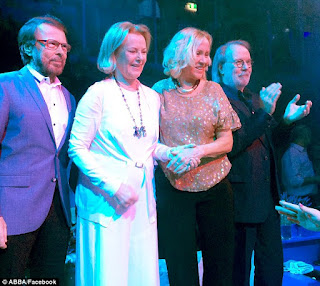 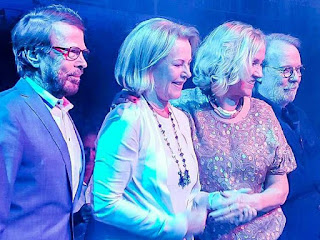 This is the first time all four have been seen together as a group since the opening of the Mama Mia! movie in Stockholm on July 4, 2008, when it seemed they deliberately avoided being photographed as a foursome by standing at opposite ends of a group photo that also included members of the film’s cast. According to my Stockholm-based Abba expert friend Magnus Palm, however, Meryl Streep grabbed a private shot of them together on her mobile phone that night.
The new dining-entertainment venue, at the Tyrol restaurant in Grona Lund, Stockholm, is based on the Greek taverna featured in the film of Mamma Mia!, and is backed by Björn Ulvaeus. I suspect that diners will be encouraged to sing along to Abba songs as they chomp on their vine leaves and moussaka swilled down with retsina, not a prospect that fills me with delight to be honest. Nevertheless, fans and guests paid 1,340 kronor (£110) for a ticket to Wednesday’s opening night where they could rub shoulders with the four members of a group whose dignity in declining serious money offers to reunite professionally reflects a level of integrity that a few others I could name would do well to respect.

Start following our signals NOW and profit up to 270% a day.

For financing expectations, converse with a business moneylender before you begin the credit procedure. While pondering offering your eatery, enroll an accomplished business dealer. fellini pawtuxet village menu