If they don’t already know it, Who fans will be delighted to learn that their heroes are well represented in Revolution? Records & Rebels 1966-1970, an exhibition at the V&A Museum that opened in September and is showing until February 26. The only act with a higher profile is The Beatles, the Stones and Pink Floyd having largely opted out, probably because they had their own exhibitions running around the same time this opened.

I’d been meaning to check this out for a while and it wasn’t until earlier this week, when I had three hours to spare in the middle of an afternoon, that I headed over to South Ken, paid my £15 (£1 off for OAPs!), and joined a queue of folk whose ages ranged from teens to older than myself. I also opted to wear the headset as I walked round, and was pleasantly surprised that the opening track was ‘Magic Bus’ from Leeds. Much more Who would follow.
In many ways the exhibits are similar in approach to those at the hugely successful David Bowie Is exhibition a few years ago: lots of LP covers, clothing, handwritten lyrics, books, magazines, posters, musical instruments and miscellaneous memorabilia. In fact there are hundreds of LP covers to be seen as you wander from room to room, all of them evidently on loan from the collection of John Peel whose taste, as is well known, was beyond reproach. Peelie, you’ll be pleased to learn, was a methodical man and almost all his LP covers have a small handwritten four or five-digit number on a small label in the top left hand corner, no doubt signifying which shelf they belong on. In the days when I had a lot of vinyl, albeit a fraction of Peelie’s collection of course, mine had a letter in the same place, A for Abba, B for Beatles, C for Clapton etc. Peelie’s method was far superior.
But I digress. The most valuable artefacts in this exhibition are no doubt the handwritten Beatle lyrics on loan from The British Library, among them ‘Help’ by John and ‘I Wanna Hold Your Hand’ by Paul, and clothing worn by the Fabs including one of John’s early on-stage dark suits, John and George’s Sgt Pepper outfits and a couple of lovely embroidered velvet jackets worn by George and Ringo. There’s also Yoko’s white step-ladder upon which John climbed to peer through a magnifying glass at the word ‘Yes’ on the ceiling of the Indica Gallery, thus triggering the romance of the decade and, some would have you believe, the slow and painful break up of the group he founded. 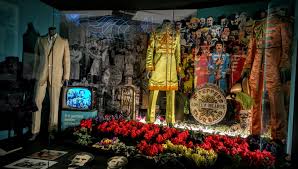 It was twenty years ago today..

Regardless of the carping of history academics, it is right and proper that The Beatles should dominate the exhibition in this way, or at least the musical side of it, but there’s much more to it than music, to which I shall return later. In the first room we have a wall dedicated to the Profumo Affair, the sex scandal that in 1964 helped bring down Harold Macmillan’s complacent Tory government, and then it’s on to Carnaby Street, photography (Bailey & Peers) and Blow Up, sex (gay issues and the pill), feminism, drugs, Stones bust, dissent, the Oz trial, black power, anti-Vietnam War demos, the King and Bobby Kennedy assassinations, early computers, space travel and probably more besides because there’s an awful lot to take in and as it was fairly crowded I wasn’t able to see everything or, indeed, spend as much time there as I would have liked. Visitors are advised to allot a minimum of two hours, preferably three if they want to absorb the lot.
There are a few eye-openers, the most profound for me the caption for a simple Barclaycard in a glass case which informs that until 1973 women weren’t permitted to have them ‘in their own right’. And all the while as I wandered around appropriate rock music (including a bit more Who) was playing in my headset, intercut from time to time with spoken words, changing automatically from room to room and a bit of a jumble really. By about half way round I took it off to concentrate better. I’d heard it all before anyway.
In some respects the design of the exhibition as it progresses mirrors the changing times, though I’m not certain this was deliberate. The earlier rooms are fun, brightly lit and colourful, the later rooms (with one exception) less so, dour and gloomy. As I remember it (and I know that if you remember it, you’re not supposed to have been there), the middle of the decade was, indeed, fun, mind-expanding, awash with possibility, all you needed was love and the hope that this might bring about permanent change. Then it turned sour, the dream was over, as John said, and the blue meanies, horrified that their power was diminishing, reasserted control, so away went the fun. ‘Four dead in Ohio,’ sang CSN&Y and the room devoted to this aspect of the sixties is grim and foreboding, as it should be, more stridently affecting than any other room in the exhibition and a bit of a comedown after Mary Quant’s technicoloured mini-dresses.
The exception is the penultimate room, the largest of the lot, on which extracts from the Woodstock film are beamed on to a huge triptych wall beneath which sits Keith Moon’s double-bass drum ‘Pictures Of Lily’ kit, some of it anyway, to the right of which is a busted Gibson, presumably Pete’s, and Roger’s suede coat with the tassels that he wore on stage in those days. Headset back on, I watched and listened to the extracts: Country Joe, Joan Baez, Jefferson Airplane and Sly Stone before The Who’s extended ‘My Generation’, after which Pete disdainfully lobs his guitar into the crowd. It ends, as it should, with Jimi playing ‘Star Spangled Banner’. All around me visitors sat on cushions on the floor to watch, creating that homely hippie vibe that I remember from the first Virgin record shop at the eastern end of Oxford Street. Then it was on to the final exhibit in the final room: John singing ‘Imagine’, a bit of a Pollyanna cliché really. 'A Hard Rain's Gonna Fall' would have been more my choice. 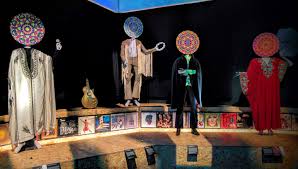 So I came away with the thought that the only permanent memorial of the swinging decade really is the music, unless you count credit cards being available to both sexes. Successive governments of a right-wing bent have done their best to negate the social progress that sixties idealists sought to establish, some gains here, some losses there as our topsy-turvy world stumbles through the second decade of the 21st Century in the sinister shadow of Trump.

On the way out there was a book to sign with a space for comments. “Born 1947. We tried,” I wrote after my name.
Posted by Chris Charlesworth

Email ThisBlogThis!Share to TwitterShare to FacebookShare to Pinterest
Labels: Odds & Sods, The Who

Hi Chris,
I've been a silent reader of your excellent blog for about two years (think I founded it following a link from The Who's Facebook page). Enjoying every one of your articles - always great!
I'm a 44 year old argentinian rock n roll fan and was lucky enough to be in England for work last October, with a weekend to spare in London - and I must say my visit to the V&AM to see this exhibition was the absolute highlight! So thanks for your review.
Anyway, regarding your last comments my impression (admiting I'm a foreigner being born after all this happened) is that in no way "the only permanent memorial is the music": as the exhibition so cleverly summarized, changes in every aspect of human society began to take shape and gained speed during the sixties... never mind the setbacks, we know evolution is slow.
So I think my generation should be grateful to yours: you tried, yeah, and did a lot!
Cheers,
Ian "Born 1972. Learning from the ones who preceeded us. Trying to move forward"

Start following our trades right now & gain up to 270% per day.