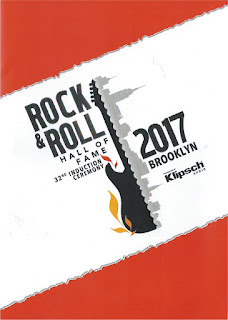 Those of you who have followed my posts about the Rock & Roll Hall of Fame will be pleased to learn that as a voter I have, as ever, been invited to the Induction Dinner at the Barclays Center in New York on April 2, 2017. The 2017 Inductees are Joan Baez, ELO, Journey, Pearl Jam, Tupac Shakur and Yes, only one of whom – Yes – I voted for. Chic have been ignored again, though Nile Rodgers is to be given a separate Award For Musical Excellence, and Kraftwerk, too, have been given the thumbs down, probably because no one is quite sure who Kraftwerk is these days, apart from Ralf Hutter who runs the franchise and recruits ‘touring members’ for shows, and who probably isn’t on the other three members of the ‘classic’ line-up’s Christmas Card lists.
Anyway, nice to see Yes making it at last, and what a shame that Chris Squire – the only member of this multi-personnel ensemble to have played with every edition of the group – won’t be on the podium. Of the rest, ELO, Journey and Pearl Jam were never really my cup of tea, I’m not big on rap and I always thought Joan was a folk singer. Lovely voice, mind.
However, I shall not be attending the event. This is not a protest against my votes being ignored (and again I shouted loudly but in vain for Richard Thompson) but because the cheapest ticket is $3,000, the most expensive (Chairman’s Sponsor) $100,000 which gets you and nine friends into the rehearsal, a pre-event dinner with inductees and a few more bells and whistles.
Finally, I’m probably not alone in thinking that as the years go by the calibre of names put forward for induction becomes less and less distinguished. Unlike awards that are presented on the strength of records released during the previous 12 months (of which there are far too many, but that’s a separate issue), entry into the Rock & Roll Hall of Fame is judged on a career’s worth of work that is deemed to have sufficient merit to warrant it. Six seems to be the minimum number of nominees inducted each year (and sometimes it’s more), so it is logical that the benchmark will gradually decline. Since artists become eligible for induction 25 years after the release of their first record, it is a terrifying thought to realise that in four years time The Spice Girls will become eligible.

per FB comments:
https://youtu.be/_uNSaKiThSs she rocks the maracas. @Hard Rain.

Listen To Pac - My Military