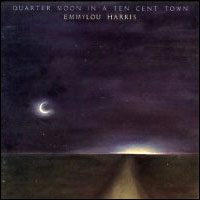 For many years now one of my favourite songs has been ‘Defying Gravity’, written by Jesse Winchester and sung with wraithlike beauty by Emmylou Harris on her Quarter Moon In A Ten Cent Town album, released in 1978. (I’m not talking about the show song of the same name that features in the musical Wicked.) In trying to put my finger on why I like this song so much – and Emmylou’s interpretation of it in particular – I realise how the title perfectly captures the melody and, unusually, is not a part of a lyric that is slightly surreal in a hazy sort of way, about flying or falling or being dizzy, or, like some of the best lyrics ever written, whatever you want it to mean really.

But it’s the melody that really captures my imagination. It rises and falls across octaves, lilting like a child’s swing, up and down like a smoothly bouncing beach ball, yet at the same time is unhurried and in perfect sync with the words. Emmylou takes the song at a stately pace, the clarity of her lovely voice at odds with its impressionistic words, humming the melody after the second verse to announce a chiming, echo-laden guitar solo that reaffirms the humility of the basic tune, followed by a repeated verse and more bars of humming to the fade; no middle-eight or variance from the central melody throughout. If it was possible to ride a roller coaster in slow motion, this is what it would sound like.
Of course this got me to thinking about other songs that feature the same device, an octave leap or an octave drop, a sort of gravitational plunge or, conversely, a leap that defies gravity. I’ve written at some length about ‘Sparks’ and ‘Underture’, both essentially the same instrumental tune from The Who’s Tommy, the former a preface to a recurrent theme, the latter a far lengthier, 10-minute exploration, and how on stage it took on another dimension; that thrilling exercise in layered dynamics generated by the propulsive cascade of Pete Townshend’s guitar, the harmonic counterpoint of John Entwistle’s bass and, most conspicuously, the orchestral sweep of Keith Moon at the top of his game.
I suspect the first time I encountered an octave skip was on ‘Dance On’, the 1962 UK number one hit by The Shadows, an instrumental I played with my old group The Rockin’ Pandas back in Skipton in Yorkshire. The song opens with a twangy low open E followed by the sharper E an octave higher at the second fret on the fourth string, a rousing sequence repeated half way through and again at the close; dead easy to play and sounds great.
For some reason our family never really did cotton on to the movie The Wizard Of Oz, otherwise I’d have been familiar with the same device in Harold Arlen’s ‘Somewhere Over The Rainbow’, sung by Judy Garland in the 1939 film. This was probably where David Bowie first saw the possibilities of an octave climb and chose to incorporate one into the luscious chorus of ‘Starman’, a great song’s greatest moment.
Bruce Springsteen, never a man to resist the appeal of a good idea, used the same device on ‘Born To Run’, which I heard for the first time ever when he played the song on stage at the Bottom Line Club in August of 1975. The album had just come out, or was about to, and I remember thinking what a cracking and memorable little riff it was. I think I went home humming it that night, which says a lot considering I’d only just heard it for the first time.
Then again, it wasn’t really the first time I’d heard it. It was just lingering in the back of my mind from other songs that incorporated a similar device. There’s a suggestion of it in John’s Beatles song ‘Don’t Let Me Down’, a favourite of mine that I’ve written about elsewhere on this blog. In his definitive analysis of Beatles music Revolution In The Head, far and away the best book on its kind, Ian Macdonald identifies this song as being a distant cousin of Dylan’s ‘I Shall Be Released’, but that song doesn’t seem to me to incorporate any octave leaps or drops. Macdonald refers to the ‘rise-and-fall feeling’ of ‘Don’t Let Me Down’ and believes it vies with ‘Come Together’ for ‘consideration as the best of Lennon’s late-style Beatles records’, an opinion I share. He’s bit sniffy about ‘Across The Universe’, however, which I rather like, and this too uses an octave leap in its acoustic guitar introduction, as does Paul’s finger-picked guitar on ‘Blackbird’ on the White Album.
So I’m trying to think of some more. The bass riff in ‘Shakin’ All Over’ perhaps; ‘Somewhere’ from West Side Story; ‘Moon River’ from Breakfast At Tiffany’s (introduced to Andy Williams in a Los Angeles restaurant in 1973, he courteously stood to shake my hand but was so short I thought he was still sitting down); Acker Bilk’s easy-on-the-ear ‘Stranger On The Shore’; Ah Ha’s ‘Take On Me’; maybe even Jimmy Page’s staccato electric guitar introduction to ‘Immigrant Song’ on Led Zeppelin III. What they have in common, apart from juggling those undulating octaves, is that I pretty much like them all.
To end where I began, there are other versions of ‘Defying Gravity’ around, by Waylon Jennings and its writer Jesse Winchester, and it was used as the theme tune to the movie The Executioner’s Song, about the 1977 execution of Gary Gilmore. For my money, however, none compare with the ethereal beauty of Emmylou Harris’ version. You can hear it here: https://www.youtube.com/watch?v=hQl_nD9RCEg

Nice one.I will post other examples when I notice them if that's OK

Chris, you mention ‘Somewhere’ from West Side Story. I always thought that Bernstein lifted, or at least was influenced by, the opening theme of the 2nd movement of Beethoven's 5th piano concerto. Please tell me if you don't hear it too.

You're right. There is a similarity. I was also struck by the similarity of a Chopin Nocturne (can't remember which one) to 'Smoke Gets In Your Eyes', the melody by Jerome Kern, from the 1933 musical Roberta, and a big hit for the Platters in 1959. Lovely song too.