THE BETRAYALS by Fiona Neill 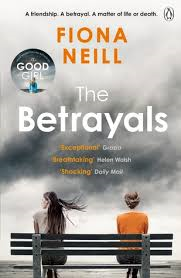 After 47 years in the game, it’s always entertaining to read a novel that features a fictitious character who’s a rock writer, especially when you weren’t expecting it and if the author appears to have no previous connection to our trade. What will they make of us, I wonder. Will it be realistic, OTT or dripping with clichés? And will the consequent references to the rock world and those who inhabit it ring true?

This happened the week before last when at Gatwick Airport before an eight-hour flight I fancied a bit of light reading and picked up The Betrayals by Fiona Neill, a breezy novel about dysfunctional families in crisis. It’s weapons-grade chic-lit, piled high by the tills and ideal light entertainment for a long haul, though to my mind it owes a debt to Ian McEwan’s* masterpiece Atonement in that a key element of the plot hinges on a young girl’s mistaken perception that many years ago a couple she saw having it off alfresco was not the couple she imagined it to be.
Barney the rock critic, the bleary-eyed cuckolded husband of an adulteress, doesn’t arrive in the story until page 134, but it’s a rock-style entrance all the same, driving a shabby car whose stereo is turned up to 11. “Mika!” he yells above the din. “He’s going to be big, big, big! Remember when you heard it first,” not a statement that puts Barney alongside Nostradamus in the Prophesy Hall of Fame in my view but we’ll let that pass. Having arrived late to a seaside gathering where friendships unravel he apologises by suggesting that, for his hosts, it… “Must have been like Geffen waiting for The Stone Roses’ second album,” a simile unlikely to be understood by the average chic-lit reader, though it certainly made me smile.
Attuned by this to Barney’s interest in contemporary music but not yet enlightened as to his profession, I might have guessed when it becomes apparent that he’s a dipso, as all of us rock critics are or were of course. Soon we learn that Barney got tickets for the other couple’s daughter – the girl who saw the shag – to see Girls Aloud and an introduction to Cheryl Cole, and that because he was the first writer ever to review an album by Arctic Monkeys he got VIP tickets to see them at Glastonbury. It seems a bit far-fetched when it is revealed that Barney took his friend, the father of the Girls Aloud fan, on a press junket to Japan to see The Rolling Stones – as if – or that he snatched an exclusive interview with one of the Oasis Gallaghers after they bumped into one another on the street in Notting Hill. These are but a handful of the many references to his work in the tale, some more level-headed than others; rock acts and magazines or papers for whom Barney writes sprinkled here and there like designer clothes and lingerie in the ‘shopping and fucking’ genre that I’m told is so popular with a certain type of reader.
Later on in the novel Barney retires to his bedroom, ostensibly to write a review of a Radiohead album for Q (I think it was), but in reality he just sits in front of his laptop and drinks red wine until he’s comatose. His decline into alcoholism is driven by the realisation that his profession has become redundant in the internet age, a position with which I can easily sympathise, but the reality is that his boozing has made him unemployable. Barney is not the main character in The Betrayals and his career as a rock critic is incidental to the main plot, but you’ll be delighted to learn that by the end of the tale he’s taken the cure, dried out and become a piano teacher. A light at the end of my tunnel indeed.
*  At least two of McEwans books also feature rock references: in Saturday the son of the main character is a blues guitarist and in On Chesil Beach a rock-loving character opens an indie record shop in Camden Town. Both portrayals seemed a bit unrealistic to me.
Posted by Chris Charlesworth