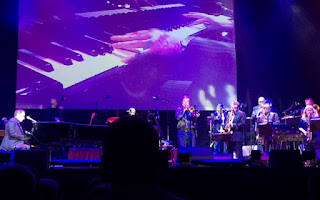 A chance encounter in September with my old friend Harvey Goldsmith, the concert promoter, took Lisa and I to Brighton on Saturday night where twice we were on the receiving end of ‘Hit The Road Jack’, the first delivered by the 20-strong Brighton Swing Choir as they strolled around the always lively area behind the Pavilion, singing loudly as they went, the second a duet by Jose Feliciano and Ruby Turner, featured guest stars with Jools Holland’s R&B Orchestra for whose show at the Brighton Centre Harvey had kindly proffered us tickets.

Concerts in Brighton are a preferred option to London from where we now live, the pleasant drive to the coast followed by a pizza, then the show and a fairly breezy drive home; so much less effort than struggling with the traffic and parking (and prices) in London. I gathered from my fellow concert-goers, a fairly mature lot, that Jools makes an annual trip to Brighton at this time of the year but never having seen Squeeze in their early days this was the first time I’d seen him in the flesh. Nevertheless I was pretty sure what I was in for and I was 100% right: a solid diet of hard core, enthusiastic and hugely danceable boogie-woogie interspersed with a sprinkling of ska, all delivered with the same charm that characterises the smooth-mannered, slightly unctuous patter that he’s perfected for his role as host on TV’s Later…, for which the one-time groovy fucker is rapidly ascending to the status of National Treasure.
On stage Jools dresses pretty much as he does on Later, his double-breasted black suit with pin-stripes, braces holding up easy-fit pants and a dark blue open-necked shirt suggesting the pasta-loving Joe Pesci character in Goodfellas, certainly someone to whom it would be inadvisable to advance a tenner. The rest of his 15-strong band, too, look a bit of a rabble, all of them a bit like the blokes that played in bands led by Ian Dury, once memorably photographed standing in a line at a bus stop, which in its way is a compliment since Dury’s bands put the sound they made before what they looked like, as do Jools’ men and women. Jeans are the trouser of choice, but not exclusively, and there’s little effort to co-ordinate a look, the odd hat suggesting lack of hair beneath, a beard or two, shirts of varying styles and colour. Only the female saxophonist in green sheen and the two girl singers make an effort, albeit a tad half-heartedly, their tight black pants and vaguely glittery tops functional rather than glamorous. Mind you, both girls move like trained dancers, especially when called to the front to relieve Jools of the vocal duties and belt out impressive solo vocals.
Whatever their sartorial deficiencies, the Jools Holland R&B Orchestra make a terrific racket and swing like there’s no tomorrow, and Jools is as fine a boogie-woogie piano player you’ll find this side of New Orleans. He’s superbly confident, too, effortless stroking the keys on a black Yamaha baby grand, that pumping left hand a tireless reminder of heroes like the Fatses – Waller and Domino – to whom tribute was respectfully paid as the evening drew on. He’s also a generous leader, giving everyone on stage bar his bassist an opportunity to solo, and with four saxophones, three trombones and three trumpets, not to mention long serving drummer Gilson Lavis and guitarist Mark Flanagan, that’s an awful lot of solos. But they’re rigidly controlled, the individual sparks always short, sharp, enjoyable blasts with a notable absence of noodling. No matter its instrumentation, this isn’t a jazz band, it’s an R&B band, whose style is pitched somewhere between the fifties and sixties and even a nod to earlier decades.
Jools arrived on stage shortly after eight and plunged straight into the boogie-woogie, ‘Double O Boogie’, I think, followed by ‘Young Man’s Game’, though the titles that follow are in some cases best guesses as many weren’t introduced. At stage left Mark Flanagan reminded me a bit of Keith Richards, his Gibson 330 worn low, slipping smoothly from chord to chord and only occasionally venturing into a solo, very understated in a coolly professional sort of way, and next to him at the back on a smallish organ was Chris Holland, Jules’ younger brother, and alongside him tall bassist Dave Swift on a stand-up, later exchanged for a six-string bass guitar. The 18th century French song ‘Plaisir Du Amour’, played with hint of blue beat, offered a break from the relentless boogie, as did Lavis’ economical drum solo which sliced a stride instrumental in half. Lavis has been with Jools since the very beginning, when the orchestra was just the two of them, as we learned from Jules’ between song chatter. Meanwhile, the rather low-tech backdrop featured close-ups of the musicians and, at one point, footage of a wonderfully quaint model town-cum-railway similar to the intro graphics on Later, which somehow added to the feeling of being taken back in time to when much of this music was first recorded. 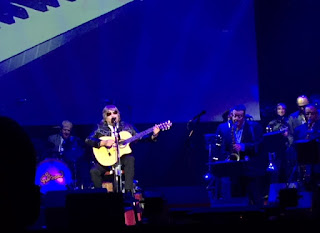 The show went up a gear with the arrival of Jose Feliciano, with whom Jules has recorded a recently released album. Blind since birth, Jose was led on by his minder who sat him down on a stool stage centre, handed him a nylon stringed guitar and let him get on with it. His first song was the Mamas & Papas’ ‘California Dreaming’ but from where I was sat he struggled to be heard against the might of the brass section. Two songs of his own, ‘Let’s Find Each Other Tonight’ and ‘As You See Me Now’ were followed by his Christmas hit ‘Feliz Navidad’ and, inevitably, ‘Light My Fire’, and in them all Jose took spikey, flamenco-style solos, his lightning quick runs still a feature of his guitar style. There were also a few well-rehearsed cracks about declining to drive after drinking too much and needing a lyric sheet in case he forgot the words.
The show reached boiling point with the arrival of Jamaican soul diva Ruby Turner, a lady of generous proportions and now a feature of all Jools’ shows, both live and on TV. Ruby shook the venue’s foundations with ‘Let The Good Times Roll’ and, more especially, the gospel fervour of ‘Peace In The Valley’ in which Satan stood no chance whatsoever of surviving Ruby’s emotive onslaught. There followed a five-song encore that included Jools’ good time evocation ‘Enjoy Yourself’, the return of Jose to duet with Ruby on ‘Hit The Road Jack’ and an audience participation rave-up on ‘What’d I Say’ that featured the entire ensemble. By this time the back drop was reflecting the time of the year, specifically Jools’ New Year’s Eve hootenannies, and at the close everyone went home very happy indeed.
There have been times when Jools’ ingratiating patter on Later has left me cold, not least when many years ago he had Ginger Baker as his guest plugging his autobiography, a book I turned down at Omnibus because it was self-serving drivel and riddled with mistakes (that weren’t corrected by its eventual publisher). ‘Brilliant book,’ said Jools who plainly hadn’t read a word of it. That said, his patter works far better on stage and there were times during this show when the delight on his face was a joy to behold, a man in his element. The music of the JH R&B Orchestra won’t win any awards for originality, and it probably doesn’t impose too much on the skills of the men and women who play it, but if an uncomplicated fun night out is all you’re seeking, go no further. 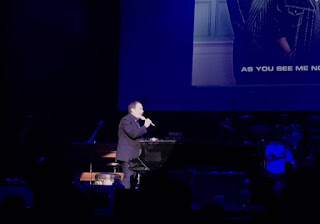 Nice to see a reference to the much missed Ian Dury, who is sadly missed.