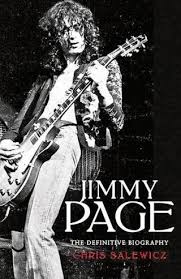 I was blessed to be on the North American tours 1975 and 77. I became righteous friends with Potsy, Mick Hinton and Ray Thomas. The the tours of the 1970s where was much more than a wild roller coaster ride. Pressure and sensationalism go hand-in-hand the Fiasco's that a company goes tours to me it's not worth mentioning.Who desires to relive their trials and tribulations.
I would like to hear Jimmie's answer if anyone had ever handed him a 9 mm German Luger that matched his attire in in Dallas Texas on 1977 . I'm pissed off @ him because I'll never see & hear him play A Live A Gain✓

I feel like the book is just more of the same old same old. It's a rehashing of the gleanings of other people's reports of Jimmy Page's actions and thoughts, with a focus on the most lurid possible interpretations.

A biography is an account of someone's life. I think what we have here is rather a kind of historical fiction. Or, actually, a definitive accounting of Salewicz's opinions.