THE SEARCHERS & THE CROWN CASINO 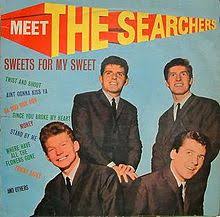 I was an early fan of The Searchers. I bought their chart-topper ‘Sweet For My Sweet’, on the pink Pye label, which with only three chords was simple to play and was therefore amongst the repertoire of my first band, The Rockin’ Pandas. The bass player in our group owned their first album, Meet The Searchers, and from it we learned to play ‘Love Potion Number 9’ and ‘Farmer John’, about a girl with ‘champagne eyes’, a lyric I found captivating. The Searchers tore into it at a terrific pace, a very tight, very exciting version of a song covered by many others, among them much later Neil Young, who played it slower and heavier, and contemporaneously by The Hep Stars, the Swedish group whose keyboard player was Benny Andersson, later of Abba, whose translation – their English is slightly wonky – mimicked The Searchers.
In 1964 came ‘Needles And Pins’, another chart-topper, which I also bought and learned to play. As our group’s lead guitarist I loved playing that little riff on a basic A chord by varying the notes on the second, B, string; again absurdly simple but absurdly effective if you let the string ring cleanly. ‘Clean’ is what we liked about The Searchers: the close-fitting, clean vocal harmonies and the clean, ringing guitars. This is where The Byrds got their jangly sound and, later, R.E.M. Come to think of it, The La’s lovely ‘There She Goes’ is a less than distant cousin.
The Searchers were rivals of The Beatles in those far-off days, and between 1963 and 1965 had half a dozen Top 10 hits, including a third number one, ‘Don’t Throw Your Love Away’. Four albums made the Top 10 LP charts too, but personnel changes and a disinclination to change their style as styles changed around them kept them from progressing as others progressed. After ‘When You Walk In The Room’, now my favourite of all the songs they recorded, and ‘Goodbye My Love’ in 1965, another fine example of their harmonic strengths, I lost touch with them just as I lost touch with many similar groups that emerged in the wake of JPG&R.
At the luncheon last December for music biz veterans in Barnes that I attend twice yearly, I skipped tables after the meal to chat again with Frank Allen, who became The Searchers’ bass player and lead singer in 1964 on the departure of original member Tony Jackson. Only lead guitarist John McNally is still with the band from that era, but they’ve stayed the course over the years with a relatively stable cast of musicians, nowadays Spencer James (with them since 1986) on rhythm guitar and Scott Ottaway (since 2010) on drums. All four sing, thus maintaining that unique choral tradition. 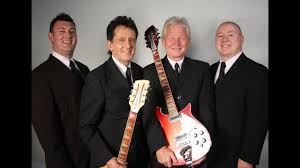 The Searchers today: Scott Ottaway, Frank Allen, John McNally & Spencer James
Frank’s been a regular at these Barnes luncheons for longer than I have, and he told me that after a three-month UK tour in the early 2019, at 75 he was hanging up his bass and quitting the road, thus bringing the group’s long career to an end. “The two hours on stage are still magic,” he told me, or words to that effect. “It’s the other 22 when you’re touring that I can’t handle anymore, the travelling, the hotels, the hanging around. I’ve had enough.”

In Melbourne in 1997 I visited a gigantic casino, a temple to Mammon of cathedral-like proportions that revolted and fascinated me in equal measure. It seemed to go on for miles, like the size of two football pitches, dark for the most part but with tiny coloured lights flashing everywhere, and rows of croupiers leaning over green felt tables as far as the eye could see; cards, wheels, dice, keno, fruit machines and, every now and then, screens where sport was being watched by men, always men, in easy chairs, every sport imaginable, football, rugby, cricket, tennis, golf, Ozzie rules football, athletics, horse racing, snooker, darts, the lot, and you could bet on the outcome of the games, or even on what might happen in the next two minutes, or five minutes, or half-hour. Such was the variety of betting on offer that it wouldn’t have surprised me if you could place $10 on which droplet of rain might slither down a window and reach the bottom first.
Looking around me, I saw that most of the customers were Chinese or at least Eurasian, and it was very noisy, crowded, and smoky too, for this was before cigarette smoking was outlawed in public. It seemed to me that I had been pitched into a vision of hell, an inferno where greed is king, luck is a faithless mistress and the bookmaker laughs all the way to the bank. As we walked past table after table, an Australian friend told me harrowing tales of how the foolhardy who’d lost everything and ended up in penury hurled themselves into the adjoining River Yarra from where their bodies were dredged the following day. To prove his point he drew my attention to those pitiful souls who lingered outside the doors on the casino’s perimeter, rattling cans for change as they shivered in the chill of this cold Australian August night.

It was about five years ago when I happened to sit next to Frank at another of the Barnes lunches, and it was then that we spoke for the first time. He told me that twice a year his group undertook tours of Australia and New Zealand and in Melbourne play at the Crown Casino, and when he told me this and spoke of the vastness of the Crown I put two and two together and realised it must have been the same casino I visited in 1997 but whose name I had forgotten. We talked about it for a while, and about how welcoming Australia was to The Searchers and other groups of their vintage.
I mentioned to Frank that in my opinion The Byrds and R.E.M. owed a big debt to The Searchers, that their wonderful vocal harmonies and jangly guitars almost certainly influenced these groups. Frank agreed, telling me he’d met both Roger McGuinn and Michael Stipe, both of whom admitted to him that his group had been a role model.
Frank turned out to be an amiable chap, a muso of the old school, who looked much younger than the 70 years he boasted then, perhaps because like another bassman, Beatle Paul, he is slim of stature and, on this occasion, drank only mineral water, and I told him that when they were first released I’d bought ‘Sweets For My Sweet’ and ‘Needles And Pins’, for which he thanked me graciously, unnecessarily, and we went on to talk about ‘When You Walk In The Room’, which was written by Jackie De Shannon. I told him this song had become a favourite of mine thanks to The Searchers but that I thought Agnetha Fältskog – another trivial Abba connection to The Searchers – had recorded the best version, a big Phil Spector-style production. Instead of bristling with indignation that I preferred Agnetha’s version, which if the push comes to the shove sounds very much like an Abba recording, to The Searchers, he said he reckoned Paul Carrack’s equally grandiose version was the best, so we argued amicably about this for a while, musing on whether the song was best interpreted by a girl or a boy. Eventually we agreed to disagree – but one thing we didn’t disagree on was the nature of the Crown Casino, the horror of it all.
Frank told me he’d be back there the following February, playing with The Searchers for the Casino punters in a concert room somewhere within its vast confines, and I wished him all the luck in the world on all his antipodean tours but cautioned him not to bet on the green baize. I don’t think he needed to be told.