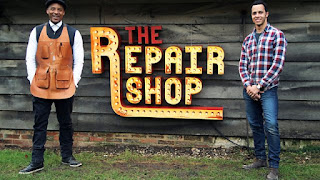 I have quietly and without fuss or regret become slightly addicted to a TV programme called The Repair Shop. It has, so I have learned, been running since 2017 but I only discovered it a couple of months ago, probably because it seems to have shifted around the schedules and channels (BBC 1 and 2) and even varied its length from 30 minutes to an hour. At the moment it is being shown on BBC 2 between 7 and 8 pm most nights of the week but it is very unobtrusive and many of its its admirers, like me, no doubt stumble on it accidentally.
The premise of The Repair Shop is very simple. In a converted barn somewhere in the lush countryside of southern England a group of expert craftsmen and women toil away at restoring much loved artefacts for grateful owners. The items they repair are always old, damaged or malfunctioning yet hold great sentimental value, like a much-loved childhood toy, or a watch that belonged to a grandparent, or a family portrait, or an abandoned piece of furniture, all of them brought to the barn by their owners who explain why the item means so much to them. Programme host Jay Blades (seen above, left, with carpenter Will Kirk) surveys the wreck, four of which are repaired per 60-minute programme, then calls upon the appropriate expert to take it to their bench and begin work.
We watch as they do their thing, fixing, reshaping, sanding, soldering, cleaning, polishing, painting, reupholstering, creating some parts anew, explaining their methods as they do so. Sometimes it is necessary for one craftsperson to call for help from another and this is always generously given, so that many of the cherished items are restored by team effort. They have included pinball machines, soft toys, street signs, jewellery, paintings, pottery, stained glass, musical instruments, tables and chairs, wind-up record players, clocks and ornaments of all shapes and varieties, and even a snooker scoreboard that once belonged to former world champ Fred Davies. When the work is complete the owners reappear, only to be rendered speechless with emotion at seeing their treasured family heirloom in sparkling condition. Many are moved to tears.
Such sentiment aside, there is another, deeper, reason why I love The Repair Shop. In an era when brutish capitalism seeks to rule the world, when climate change deniers do so only to protect their profits, and when Brexit is promoted by billionaire tax evaders, The Repair Shop stands proud as a beacon of unselfish co-operation without the tiniest suggestion that monetary value in any way motivates those who bring their possessions – most of which are of sentimental value only – to the shop; nor do the skilled repairers ever mention that in the real world the wonders they have performed would have cost a small fortune. Value is irrelevant. In this way it is the exact antithesis of The Antiques Road Show wherein the value of an item is finally revealed like a rabbit out of a hat, as if the significance of its worth effortlessly trumps whatever history and providence the antiques experts have patiently outlined.
Furthermore, The Repair Shop is utterly bereft of those awful, stage-managed, artificial soundbites that are repeated ad-infinitum during TV shows in which confrontation or competition drives the action. No one says ‘awesome’. No one ‘dreads’ anything. No one is angry. No one complains. Everyone quietly gets on with what they have to do without making a fuss. It is low key, low profile, low maintenance. It doesn’t shout. The smiles of the experts are genuine. The reward is the satisfaction of a job well done and the joy on the faces of those whose treasures are restored. An antidote to throwaway culture, it is a perfect representation of a better world.
Besides which, the Repair Shop has done me a favour. On one show David Kennett, a guitar restorer, reconditioned a battered Fender Jazz Bass that had belonged to Tony Wilson, the bassist in Hot Chocolate, now the property of his son. So impressed was I with David’s work that a week ago I left my prized 1963 Gibson LG2 acoustic guitar at his workshop for some much needed TLC. Watch this space…

Quite agree, there should be a gentle TV channel.

Loved this programme from the beginning. The experts share values from a bygone age. Heartwarming, inspiring and fascinating in equal measure. Hope there will be many more series to come