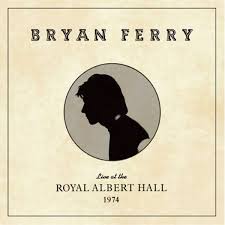 Viewed at first with some suspicion by traditionalists, the Roxy Music project began as a hybrid that updated old influences while forging ahead into unexplored areas of music, style and ideas that shifted the same axis David Bowie was tilting, albeit without quite the same extravagant allure. Roxy were sharp operators who attracted the interest of Melody Maker by sending a demo tape of their songs to our assistant editor Richard Williams, then also the presenter of BBC2’s Old Grey Whistle Test, before they’d even signed to Island Records. Liking what he heard, Richard took an interest in their career that boosted their fortunes but the truth is we were all captivated by their flair and ingenuity. (Indeed, it was Richard's review of this album on his The Blue Moment blog, that alerted me to its merits.)
It is sometimes forgotten that Eno was a core member of the original Roxy quintet but when he quit after their second album to develop his own peculiar strand of music-making, it was only a matter of time before Bryan Ferry, their equally distinctive lead singer, did something similar, though in his case it was to follow a solo career parallel to his work with the group.
On the evidence of this terrific, high-energy live album, recorded soon after Ferry declared his independence, it was a sensible move. Whatever else they might be accused of, Roxy never lacked good taste in musical influences, and Ferry’s choice of material on this set suggests that he was largely the architect of this. Captured during his three-night stint at London’s RAH in December 1974, it is notable not just for the exceptional playing by the group of skilled musicians he assembled to back him up but also for the varied, personal and impeccable songs, all bar two of them covers, he chose to perform.
Two years into his career as Roxy’s languid, lounge-lizardish lead singer, Ferry might have been expected to adopt the persona of a crooner in his solo efforts, updating the Sinatra-Como-Bennet songbook with revisions based on the electronic touch that Eno brought to the first Roxy album and his own dreamy, slippery vocal styling. In fact, it is nothing of the sort. He might have dressed in a tuxedo but he was more Elvis than Sinatra, offering up a full-tilt rock’n’roll show, its momentum decelerating only for his elegant interpretations of the two oldest songs in the set, ‘Smoke Gets In Your Eyes’ (from 1933) and ‘These Foolish Things’ (1935). 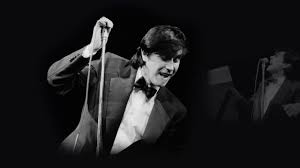 Nine of the album’s 14 tracks come from Ferry’s first solo album These Foolish Things, released in 1973, four from his second Another Time Another Place (1974), with one, ‘A Really Good Time’, from Roxy’s Country Life LP, the only nod to his day job.
The musicians launch into the opener, ‘Sympathy For The Devil’, with more ferocity but less subdued menace than The Rolling Stones and it’s clear from the sinewy guitar fills, played by either John Porter or Phil Manzanera, and the enthusiasm of backing vocalists Vicki Brown, Doreen Chanter and Helen Chappell, that sitting down at the RAH that night was optional. Thereafter my preferred tracks include a snappy ‘Baby I Don’t Care’, the Elvis song whose rumbling bass line is perfectly reproduced by John Wetton; ‘Don’t Worry Baby’, Brian Wilson’s medium-paced and oh so lovely redemptive song; ‘The Tracks Of My Tears’, Smokey’s much covered Motown R&B hit; and ‘A Hard Rain’s A-Gonna Fall’, the Dylan song given a similar angry reading to that of its composer. The Roxy ballad ‘A Really Good Time’ flaunts the same ominous discords as the group version and delivers the same punch, a warning about a surfeit of pleasure, with sinister foreboding. Sequencing it right before ‘The In Crowd’ was no doubt deliberate. Nevertheless, it’s hard to differentiate between tracks as the energy level is maintained throughout, a reflection on the muscularity of the band that also includes Eddie Jobson on keyboards and Paul Thompson on drums.
Packaged in a handsome booklet that contains top quality black and white pictures from the concert and an unusually literate essay by Roxy’s policy advisor Simon Puxley*, the album is a reminder that Bryan Ferry was a potent if slightly disquieting presence on the UK’s music scene before his social ambitions moved in the same direction as Joe Lampton in Room At The Top.

The photograph was scanned from the CD booklet.

* Simon Puxley, who died in 1999, was a PhD and one of only two writers who did a runner on me while I was commissioning editor at Omnibus Press. An amiable if absent-minded intellectual, he took an advance to write a book on The Pretenders. I never saw him again. When I couldn’t reach him by phone I called round at the address in Shepherd’s Bush he’d given on the contract. The door was answered by his wife. “If you find him tell the fucker not to return here if he values his life,” she said, or words to that effect.
Posted by Chris Charlesworth

Eno quit the band after the second album, For your pleasure.

My mistake, thanks. Error duly corrected.

Arranmore island ferry I think this is an informative post and it is very useful and knowledgeable. therefore, I would like to thank you for the efforts you have made in writing this article.