THE WHO SELL OUT SUPER DELUXE EDITION 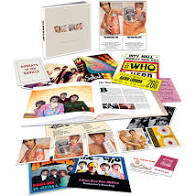 The forthcoming Super Deluxe Edition of The Who Sell Out is a treasure to behold, 112 tracks across five CDs, an 80-page booklet, a couple of 7” singles, posters, and a bundle of obscure memorabilia that includes a replica of Keith’s membership card for the Speakeasy, not that the girls on the door were likely to ever refuse him entry if he didn’t produce it. Indeed, as far as I am aware Keith was never refused entry to the Speakeasy, no matter what state he was in, probably because he spent wads of money there and everyone loved him.

But I digress. This outrageously fabulous last word on Sell Out has clearly been created with love and care by all involved, just like the previous multi-CD Super Deluxe boxed editions of My Generation, Tommy, Live At Leeds and Quadrophenia.

And this morning it was just a click away, to misquote Mick; by which I mean that all I needed to do to have it delivered by mail on April 23 was to exert a tiny downward pressure on my mouse, thus activating its purchase from Amazon for £84.99, which is £5 cheaper than on The Who’s official site.

I was so close – but I didn’t. And it’s not just because, scanning all the songs, it didn’t take me long to figure out that I already own at least one version of all but seven of those 112 tracks, three of which are brief commercials deemed surplus to requirements when the original Sell Out LP was released in late 1967. Nor is it because, glancing at my Who collection, which is relatively modest by the standards of some I could name, I already have three CDs of Sell Out and four vinyl copies, including a mint Backtrack and MCA2-4067, Sell Out and A Quick One in the same double sleeve, which doesn’t look like it’s been played much either. The same cannot be said for Track 613 002, bought one lunchtime in early 1968 at WH Smiths in Bradford close to where I worked in those days, which, to put it mildly, is fucked.

And it’s this ‘number of plays issue’ that explains why my right index finger hesitated this morning. The thing is, I have resisted buying any of the Super Deluxe sets by The Who – or anyone else – because they tend to be played once and then placed on a shelf like an ornament. I usually have 95% of the music on them anyway, and, while alternative takes are all very well and sometimes quite interesting, when it comes to the crunch I invariably prefer the original release, the one that the artist deemed, probably correctly, to be the best take in the first place, so after one play, out of curiosity, the big box goes into storage.

Sometimes, when I’ve been somehow involved, I’ve been given a box-set by The Who’s management or their record label, as I was most recently with the Track Singles Box whose booklet contained text written by me, but after spinning ‘… Miles’ and ‘Pinball’ and glancing through the booklet I put it on a shelf where it now sits, most of its contents unplayed though certainly not unloved. I already have all The Who’s singles anyway, had most of ’em for years, but like my original Sell Out, they’re fucked, especially the ones from the sixties. Come to think of it, the four discs in 30 Years Of Maximum Rhythm & Blues haven’t seen the light of day for many a year now either – and I’m credited as co-producer on that compilation.

But back to Sell Out, which I love by the way. The question, however, is not so much whether the music is great, which is a given, but whether I want to pay £85 for the seven tracks with which I am unfamiliar and from the titles alone sound like they might be substandard: ‘Sunn Equipment Promo Spots’ (2’ 42”), ‘Great Shakes’ (1’ 04”), ‘Things Go Better With Coke’ (0’ 31”), ‘Top Gear’ (3’ 03”, an instrumental), ‘Facts Of Life’ (3’ 22”, the backing track for a John song I’d never heard of), ‘Kids! Do You Want Kids?’ (1’ 40”, a Pete demo of a song he wrote for the US Cancer Society) and ‘Inside Outside USA’ (3’ 09”, another Pete demo, this one abandoned because he thought it sounded too much like The Beach Boys). Reading through the booklet I thought for a moment that there was an eighth, called ‘Thinking Of You All The While’, but then I realised this was an alternative title for ‘Sunrise’.

On The Who’s website it states that there are 47 unreleased tracks including 14 unheard PT demos but the reality is that aside from those mentioned above there are 33 different versions of existing tracks, and that the 14 previously unheard demos, inexplicably held back from PT’s three Scoop albums, are the real find here.

For the record, CD1 features Sell Out in mono plus 13 bonus tracks, mostly well known; CD2 features Sell Out in stereo plus another 13 bonus tracks, again mostly well known; CD3 features 22 outtakes from sessions for Sell Out or from around the same time period, eight of which are commercials; CD4, intriguingly titled The Road To Tommy, features 16 tracks recorded in 1968, ie between Sell Out and Tommy, which is an assortment of singles, B-sides and previously released oddities; and CD5 features the 14 PT demos, lovingly annotated by their composer in the booklet.

Talking of which, the booklet is superb, containing loads of great pictures and essays by PT, pirate DJ Pete Drummond, recording engineer Chris Huston, advertising guru Arnold Schwartzman, Speakeasy manager Roy Flynn and artist/designer Richard Evans. Track notes are by my friend Andy Neill, co-author with Matt Kent of Anyway, Anyhow, Anywhere: The Complete Chronicles of The Who 1958-1978, the best illustrated Who book on the market, and also the best reference book of that era.

Combined with the two singles – ‘… Miles’/’Someone’s Coming’ on Track and ‘Magic Bus’/’Dr Jekyll And Mr Hyde’ on Decca USA – and the bits and pieces like Moonie’s Speakeasy card, the Saville Theatre programme from The Who’s October 22, 1967, show and a Fan Club newsletter, it certainly makes for a bumper package. Who knows, maybe I’ll be tempted to exert pressure on my mouse after all.

Who's Next hasn't received the Super Deluxe treatment yet. Probably next in line. TBH i haven't been impressed by any of the other previous Who SDE's. Hopefully Who's Next will put that right.

Thank you for pointing out my error. It has now been corrected.

Thanks Chris, great post. As an unashamed Who completist, I will be excerting the required pressure on my mouse very soon.