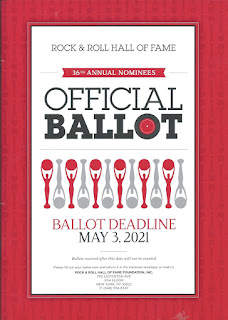 If this year’s list of acts to be inducted into the Rock & Roll Hall of Fame is anything to go by, my skill at picking winners is getting better. Three of those for whom I voted – Tina Turner, Carole King and Todd Rundgren – made the cut, alongside The Go-Gos, Jay Z and Foo Fighters. The other two for whom I voted but who lost out were The New York Dolls and Dionne Warwick, though I have no doubt they’ll make the grade in the fullness of time; hopefully – in the case of the Dolls – while David Johansen, the last surviving Doll, is still with us.

It’s taken Todd many a long year to get in, though Tina and Carole have long been there in diverse modes, Tina as one half of Ike & Tina since 1991 and Carole with her former husband and composing partner Gerry Goffin in the songwriters’ category since 1990. Jay-Z and Foo Fighters get in at their first bid, it being 25 years since both released their debut albums, the minimum period to qualify for nomination. Unless I’m mistaken, The Go-Gos haven’t been nominated before, even though their debut LP arrived in 1981.

These acts make it into the performers’ category, the main one, but I’m gratified to note that Kraftwerk, denied induction for years despite my eternally loyal support, have won an ‘Early Influence Award’, which is certainly justified. It’ll be interesting to see if any of them turn up to claim it or whether the concept of the Rock & Roll of Fame is simply too indigestible for Ralf Hütter’s delicate anti-Rock sensibilities.

Among the losers this year are a couple of Brits from the opposite ends of our musical spectrum, Iron Maiden and Kate Bush. The former did well in the popular vote whereby anyone can go on to the R&RHoF website and nominate one of the acts but no doubt fell down due to the nominating committee’s traditional antipathy towards metal acts. Kate fared poorly in the popular vote which isn’t surprising as she’s a bit too quirky for American tastes, and if she had got in it’s likely there would have been an issue over her performing at the ceremony. Afrobeat pioneer Fela Kuti actually came second in the popular vote (after Tina) but wasn’t nominated, which suggests that who fans vote for holds little sway with the final judgement.

Being a voter for the R&RHoF is an ‘honorary’ position. We’re not paid and no favours are granted beyond an opportunity to listen to selected works by the nominees via a link to their website. It could be argued that if you need to listen to an artist’s music before casting your vote, you really ought not to be voting in the first place, but despite getting a bit long in the tooth I was familiar with the work of 14 of the 16 acts nominated. The other two were rappers (Jay-Z and LL Cool J) whose genre as a whole is not to my taste.

Each year I vote I ponder over whether or not I’m getting too old for the job but I keep going nonetheless. If I do resign I’ll do so as a protest against Richard Thompson and Slade never having been nominated, let alone inducted. Every year for as long as I can remember I’ve banged on about the injustice of this but no one has taken a blind bit of notice. However, if I did resign I wouldn’t even be able to vent my spleen on this issue, so I beat on, boats against the current, borne back ceaselessly into the past, as I read somewhere.

Please keep sending in ballots and whatnot since you're the only one I know who could possibly convince those pinheads to induct Nicky Hopkins already.