NO ONE ROUND HERE READS TOLSTOY: Memoirs Of A Working-Class Reader by Mark Hodkinson 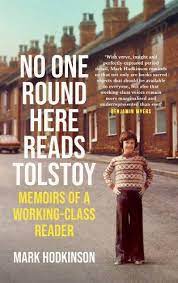 This is a book about books, acquiring them, reading them, learning from them, collecting them, reviewing them, publishing them, selling them and even loathing them when it’s necessary to recycle piles of unsold ones. Mark Hodkinson, newspaper reporter turned music writer turned football correspondent turned novelist, has written a love letter to them, for they have shaped his life, hauling him from a book-free upbringing to his present home, which he shares with no less than 3,500 of them.

I have known Mark since 1989, when I commissioned him to write a biography of The Wedding Present, the Yorkshire band led by David Gedge. Thank Yer, Very Glad was published a year later and I was sufficiently impressed by his work to ask Mark to write several more books for Omnibus Press. They were an eclectic bunch – Marianne Faithfull, Simply Red, Springsteen, Prince and Queen’s early days – and I soon realised that Mark was a bit different from most writers I hired. It wasn’t just his emerging literary skills or willingness to get stuck into fairly deep research, more a sense that his ambitions went quite a bit further than rock biographies or even the football reports and related features he wrote for The Times. No, Mark sought a higher calling, to become a novelist, and to write literary fiction at that, to join the club that included those writers he most admired, the ones from working-class backgrounds similar his own who brought harsh lives to the page and, through their fiction, exposed injustice brought about by systems of government that all too often rewarded those already privileged.

This thinking – and these kinds of books – inform No One Round Here Reads Tolstoy, its title an observation uttered to him one day by the proprietor of a second-hand book shop in his home town of Rochdale, where he still lives. Part autobiography, part idiosyncratic literary criticism, part primer to the world of book publishing, its principal message is that even if the house in which you were raised contained only one book you can rise above inbred apathy with imagination and persistence. In Mark’s case the one book his parents owned was a leather-bound volume of questionable merit called Folklore, Myths, and Legends of Britain. “Dad treated it with reverence,” writes Mark, “keeping it on top of the wardrobe with other items of great worth such as their wedding album and my Cycling Proficiency Certificate.” Mark’s book is chock-full of droll memories like that, and often had me chuckling, not least when he enters the world of local journalism, a field I know from long ago.

Running parallel to Mark’s journey – the kind of word he despises, by the way – is the story of his grandpa, John Duffy, whose descent into dementia is movingly told, all the more so for its lack of sentimentality. We are left in no doubt, however, that in moments of clarity John, a born storyteller, influences his grandson not so much to find a life beyond the grim backstreets of fading Lancashire towns but, more importantly, to discover a better life within them. 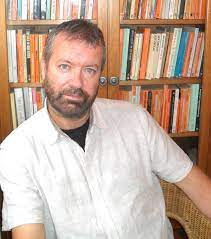 The bulk of the narrative follows Mark’s progress from school, where the education system deems him suitable only for manual work, through the hurdles he leaps on the way to reporters’ offices at various northern newspapers, and to Omnibus Press, where our lives become briefly intertwined. In the meantime, he’d discovered music, fallen for The Smiths, bought a guitar and formed a band that once memorably supported The Stone Roses. All the while, though, he’s seeking out books, more and more books, mostly old, reading them and forming opinions about their authors. It comes as no real surprise that JD Salinger’s Catcher In The Rye exerts a powerful influence, along with the social realism of the ‘kitchen-sink’ writers like Barry Hines, Alan Sillitoe, Shelagh Delaney and many more.

Neither does it come as a surprise when he forms his own book publishing company, Pomona, a risky undertaking at the best of times, and though Mark’s heart is in the right place in regard to the type of books he wants to publish, including his own, there’s an element of noble idealism about the enterprise. He reprints books by some of his favourite writers whose work has gone out of fashion – and, unfortunately for him, remains so – and comes up against harsh reality when the one book that might make his fortune – a biography of JD Salinger that, fortuitously, coincided with his death – attracts problems not unconnected with greed that oblige him to relinquish valuable US rights. His wry, often comic and always sincere observations about the authors he meets through Pomona and elsewhere are a highlight of the later chapters, along with some carefully researched facts and figures about the future of the book trade. Like me he loathes Kindle.

Mark is now a respected novelist himself*, with many admirers in the sphere of literature. This pleases me immensely, not just because I played a small part in it but, more importantly, because he deserves it. In No One Round Here Reads Tolstoy he has written a wonderful, beautifully sculpted, heartfelt book about climbing a ladder to that place he loves the most, a comfy armchair in which he can lose himself in the imaginary world of a printed page.

*Among them The Last Mad Surge Of Youth, about a fictitious rock star, reviewed here: http://justbackdated.blogspot.com/2014/03/the-last-mad-surge-of-youth-by-mark.html

Cheers for that Chris, I have always been impressed by Mark's energy. I am apparently getting a copy hand-delivered to me in the next month or so. It sounds as good as I had hoped.

Excellent trip back through the day--seems our Grandads recited the same poem to us as kids!. A lot of parallels for me to time travel back to a rose-tinted time. Great read.