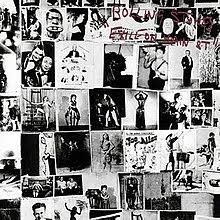 Fifty years old this week, the double album Exile On Main Street is being rightly celebrated as the Rolling Stones’ greatest ever LP. The hits compilation Forty Licks aside, it is the Stones’ LP I have listened to the most; released as a single CD in 1994, I doubt any six-month period has passed since when I haven’t played it at least once at home or in my car, a great big smile erupting as ‘Rocks Off’ blasts from my speakers, Keith’s guitar swinging into action as Mick sings ambiguously about sex and, possibly, the perils it can bring.

It’s a downhill, helter-skelter ride from there, not a duff track among the 17 that follow, a smorgasbord of hi-energy rock, spirited gospel, honky country and soupy blues. Never again would the Stones sound so confident, so convincing, so energised, so prolific, so eclectic, so wrapped up in their musical ideals in the space of one LP, albeit one that occupied four sides of vinyl. When I play it now I sense a sort of musical claustrophobia, as if the group was cramming as much into it while they could, perhaps even making a final grand statement before the money ran out and they imploded into a mess of Mick’s upwardly mobile ambitions, Keith’s drug addiction, Charlie’s ambivalence, Bill’s gloom and Mick Taylor’s inexperience.

We could be forgiven for thinking that ‘All Down The Line’ and ‘I Just Want To See His Face’ were produced by different bands. The former – which was actually recorded 18 months earlier in Los Angeles – ranks alongside any of the Stones’ great Chuck Berry rewrites, a Grade-A rocker that demands repeated plays, while the latter is a swampy voodoo chant in the style of Dr John, the sort of thing that might be heard at a gospel church in Mississippi where the congregation speaks in tongues.

No two songs on the entire record are less alike than this pair, and they are matched by the incomparable ‘Tumbling Dice’, with its layer after layer of sinewy guitar lines, or the country campfire vibe of ‘Sweet Virginia’, in which Gram Parsons surely had a hand, and its companion piece ‘Torn And Frayed’, or the relentless, almost punk, pace of ‘Rip This Joint’, or Keith’s own ‘Happy’, virtually a one-man band creation.

Everywhere you look there’s something to gorge on: the James Moore cover ‘Shake Your Hips’, aka ‘Hip Shake’, given a sensuous Southern twist; the OTT tribute to Angela Davis that was ‘Sweet Black Angel’; the down-home blues of ‘Stop Breaking Down’, rearranged from Robert Johnson’s original with Mick Taylor on slide; the sumptuous gospel of ‘Loving Cup’ with Nicky Hopkins’ cascading piano; even the throwaway ‘Turd On The Run’, another pacy sprint with Mick’s harp howling in the wind.

What have I missed? Bobby Key’s sax in ‘Casino Boogie’; the sleazy ‘Ventilator Blues’; the emotion-packed, choral majesty of ‘Let It Loose’; and the swaggering finale ‘Soul Survivor’, the cue to start again at the beginning, as I so often have.

In Keith’s book, Life, the Stones’ guitarist says the title of the album came from the group’s tax-imposed exile in the South of France where the LP was recorded, the main street being the Riviera coast road that stretched from Cannes to Monte Carlo. Being cooped up in Nellcôte, the 18-room mansion built in the 1890s in the hills above Villefranche Sur Mer, the Stones and their entourage of wives, crew and additional musicians like Keys, Jim Price, Parsons and Hopkins, had nothing else to do but eat, drink and make music, urgently, and result still sounds spectacular.

Being younger, I acquired this on vinyl in 1988, and found myself playing side 3 way more than the others. The convenience of hearing it on CD, without having to change sides every 15 minutes, opened me up to its majesty.
And I still love side 3.
Here's my longer take: https://everybodysdummy.blogspot.com/2010/05/rolling-stones-18-exile-on-main-st.html

A band of Englishmen (with a few sidemen) in France play American blues, country, folk is a great soup of cultural exchange. A bouillabaisse of blues.
They depended on Anita Pallenberg to handle the practicalities of life. Mick's French was probably no up to it.

Let It Loose is the great unsung Stones song. Everything about it is magnificent, from Mick's singing to the song's structure, as it builds that glorious outburst of horns and chorus in its finale