I am reminded by a scan on Facebook of a copy of Melody Maker from July 25, 1970, that 52 years ago last weekend I was in Holland reporting on a brief tour of the country by Traffic, Free and Bronco, my first ever trip abroad on an assignment for MM. I’d only been on the paper for just over a month so this was a big deal for me, so much so that I remember calling my dad and sister up in Yorkshire to let them know that this new job of mine involved foreign travel, a fairly exotic concept in those days. Truth to tell, it was only the second time I’d been in an aeroplane. 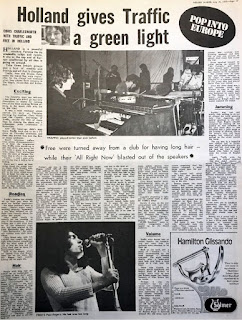 I have reproduced the actual page from MM above, and I remember the trip very well. There was a TV show somewhere out in the country and concerts in The Hague, Rotterdam and Amsterdam. Jim Capaldi and Chris Wood missed their flight from Heathrow, and on the way to the TV station the driver got lost in the midst of a forest with Steve Winwood and myself in the back of his car. I was supposed to be interviewing him during the drive but our whereabouts were of more concern to him, and all I got out of the boy genius were a few quotes about his need to increase Traffic’s line-up. Having spent the last five years of my life as a newspaper reporter I duly wrote up a story for MM’s news pages under the headline: WANTED: TWO TRAFFIC MEN.

“We want another two musicians in the group,” Steve told me in the back of that car. “We want another keyboard man and a bass guitarist but we are looking for people who can play more than one instrument. I am doing too much work. It’s very difficult playing bass and singing and playing lead organ in between. I could concentrate on singing better without playing bass as well.” 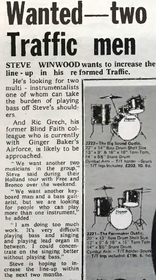 Steve wasn’t kidding about doing too much work. I watched three shows and came away in awe of his musicianship, the way he played bass on the pedals of his Hammond while he sang and held down the melody on the keys. I think that for one or two songs he even played an electric guitar, a white Strat, while sat at the organ, still playing bass on the pedals and singing, truly the performance of a maestro.

I’d already encountered Free, then topping the UK charts with ‘All Right Now’ which seemed to have crossed the North Sea and was already familiar to Dutch audiences, and I’d been up to watch them in Sunderland where they caused a minor riot. It wasn’t like that in Holland where none of the concerts were sold out, even with Traffic topping the bill. I recall that a group of us, including Paul Rodgers, were walking down a street in The Hague when we heard ‘All Right Now’ blasting out from the speakers outside a club called Tiffany’s but when we tried to go inside the doorman refused us entry because Paul’s hair was too long. “Can I have my record back?” he asked.

Back at our hotel a local covers band was entertaining punters and some of our party commandeered their instruments for a jam; Jim Capaldi on drums, Steve on a piano, Kevin Gammond and Robbie Blunt from Bronco on guitars and their singer Jess Roden on vocals. Boldly, I volunteered to play bass so long as our repertoire didn’t extend beyond 12-bars in easy keys which it didn’t, thankfully. In fact, we only managed two numbers before the local group demanded their instruments back. “It might have had something to do with volume switches being tampered with,” I reported in MM.

After watching the three shows, I wrote that whole page in MM about the trip and came away with an enhanced admiration for Traffic and high hopes for both Free and Bronco. “Full marks to Traffic who played superbly throughout the tour,” I concluded. “Free have yet to establish themselves abroad in the same way they have established themselves at home. Bronco are a group with a future.”

As you can probably guess the tour was an Island Records package, and I think it was at the Rotterdam show where Island’s publishing chief Lionel Conway and myself befriended a couple of free-spirited American girls who obligingly joined us in the hotel room we shared, another first for me insofar as all previous encounters of this nature had been conducted in private.

This MM job doesn’t lack potential, I thought when I got back to the office and typed up my first report from across the waves.

Nice one, always interested to hear about early Traffic. But what caught my attention was the mention of Robbie Blunt as a member of Bronco, a band I have never heard, or heard of. I became a fan of his when he worked with Robert Plant in the 1980s. I know the he played blues and rockabilly before he was with RP (and in fact, that's how Plant noticed him, as part of some weekly pub jam, I believe). But I have never heard why he left Plant after his third solo record, and since that time his credits are few and far between - Clannad, Jeff Healey, a few others. What was Bronco like? It's hard to find them, since the name has been used over and over, and by some pretty dreadful acts in a cornucopia of styles. Any idea how Robbie keeps himself busy these days? Thanks much.

On a tangent, I'm friendly with Ronnie Greer - the veteran kingpin of Northern Irish blues guitarists - who was in a band called Bronco for several years in the 70s... in Belfast. A kind of 'yacht rock' band specialising in covering little-known American music and awaiting a genre descriptor! They managed a BBC NI TV concert in 1979 (clip below). Amusingly, Ron had never heard of the Island Bronco until I posted an old MM ad on FB.

Bronco sounded almost American, a bit West Coast in the CSN&Y mode but without the harmonies. Maybe a bit more soulful, too, as I recall. I have no idea where any of them ended up, but you can find them on the internet.

Bronco played support to T.Rex on a few gigs in 1971. As for Free in Sunderland - wasn't that gig recorded for their live album?