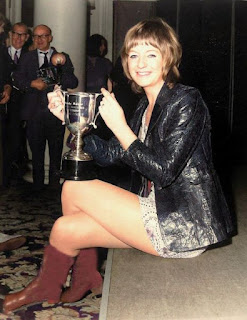 Christine Perfect with her Top Female Singer award at the 1969 Melody Maker Pop Poll awards at the Waldorf Hotel in London.
(Photo by David Cairns/Express/Hulton Archive)

Among the many books I edited for Omnibus Press was A Promoter’s Tale: Rock At The Sharp End by Geoff Docherty, who promoted rock concerts in the UK’s north eastern cities by all the big names during the late sixties and seventies. In his book Geoff describes how in November, 1969, he promoted the opening concert of a UK tour by Christine Perfect who’d recently left Chicken Shack to strike out on her own. She’d just won the Female Singer Award in Melody Maker’s Poll – and would do so again in 1970 – so he thought the Locarno in Sunderland, which held around 1,500 people, would sell out easily.

Alas, Geoff was optimistic. Only about two dozen fans bought tickets and when Christine arrived it was his depressing duty to inform her of the situation. She was tearful when he told her about the miserable turnout. Geoff assumed she wouldn’t want to go on.

He was wrong. Christine did perform. She composed herself and walked out on to the stage, and as she began to play those who were there left their seats to come down to the front and, eventually, gather around her on stage while she sat and sang at the grand piano provided by the venue. The small crowd eventually all sat down on the stage while Christine played for them for over an hour, some blues, some favourites from her repertoire, an original song or two. The fans cheered her and wanted more, and she finished with her Chicken Shack tour de force, ‘I’d Rather Go Blind’.

“She was magnificent,” wrote Geoff. “It was a brave and inspired performance. From that day on, whenever things got tough for me, her display of triumph over adversity was an example I always sought to follow.”

If I was asked to name my favourite member of Fleetwood Mac I wouldn’t hesitate. Christine McVie, of course. Stevie was a bit OTT, Lindsay seemed a bit full of himself, Mick was a bit too gangly and John a bit too shadowy. Christine was nothing like them, discreet, a team player content to stand her ground unobtrusively at stage right, usually playing a small electric piano until called upon to sing those lovely songs of hers from the Fleetwood Mac catalogue that, in my view, were largely responsible for the multi-million sales figures their albums racked up.

She was disarmingly modest in a quiet, decent, English way, with a sweet but slightly husky alto voice entirely lacking in ostentation. She didn’t need to over emote because her songs spoke for themselves: ‘Say You Love Me’, ‘Over My Head’, ‘Warm Ways’, ‘You Make Loving Fun’, ‘Don’t Stop’, ‘Over And Over’, ‘Think About Me’, ‘Wish You Were Here’, ‘Hold Me’, ‘Little Lies’, ‘Everywhere’ and, of course, ‘Songbird’, her delicate, understated masterpiece. Her songs, always effortlessly melodic, were outnumbered by those composed by the other members of Fleetwood Mac, but in terms of quality, song for song, her yield was superior to them all.

I never had much to do with Fleetwood Mac professionally, though in 1972 I was sent by Melody Maker to interview the pre-Buckingham/Nicks group at their country house, Benifold, near Borden in Hampshire. Having just released their Bare Trees LP, the group seemed to me to be in the pleasant position of not having to work too hard and were unworried about their diminishing profile in the UK.

Christine sipped from a mug of tea and told me she’d had her fill of slogging around Britain. “In England it means travelling by road and coming home each night in the early hours,” she said. “But in America you are staying in hotels and it doesn’t feel like such a tiring drag over there.”

With Bob Welch and Danny Kirwan elsewhere during my visit, I spent a pleasant afternoon with Mick, John and Christine in the rehearsal space they’d created for themselves in this elegant but untidy country mansion. They all believed their future lay in America, though, of course, they weren’t to know then how utterly correct they were in this regard.

Thereafter chance delivered me elsewhere whenever Fleetwood Mac played concerts near where I lived and I never reviewed a show of theirs for MM. The renaissance brought about by the arrival of Stevie Nicks and Lindsay Buckingham occurred just as I my time on MM was drawing to a close, and I’d left the paper by the time they played Madison Square Garden in June of 1977. I was working for a music biz company in New York that summer, however, and copped free tickets so I did manage to see the Fleetwood Mac supergroup just the once. Cresting a wave, they were outrageously good and brought the house down. I also copped an invite to an aftershow party and recall seeing the five of them sat together in a swanky restaurant. Dressed and looking just like they do on the cover of Rumours, they were surrounded by well-wishers, unrecognisable from the group I met in Hampshire five years previously. With flashbulbs going off all round them, they positively glowed.

Just like Christine did at the Sunderland Locarno in 1969.

I saw her (with Chicken Shack) in the latter half of the 1960’s in a West End club, but cannot remember which one, however I think it may been the same night I saw Hendrix for the first time, sitting in with the featured band. Both momentous for me, whether they occurred on one night or two! I had no idea or knowledge of Etta James at that time, and just thought it was great music. Doesn’t really matter what the provenance is if it gets you in the balls, and I Would Rather Go Blind sure did that! RIP Christine Perfect, as she was then.

Sorry, this is Frank Warren

In August 7, 1975 I went to Vancouver from Victoria (on Vancouver Island) to see Peter Frampton at the Commodore Ballroom. When I arrived at the entrance, the door was closed and locked, with a notice stating the Frampton show was cancelled, due to increased fame, etc. (This I realized later on!) I arrived back in my hotel room, with today's newspaper, to see what was on, maybe a half decent movie, or something else. Immediately, I spotted an advert for Fleetwood Mac, playing tonight at the Queen Elizabeth Theatre. I left my hotel room and the few blocks to the Queen E. As I arrived, I noticed the patrons entering slowly. I walked over to the box office, bought myself a ticket and wandered in. I surveyed the room to see an empty seat, three from the front of the stage. I sat down, looking over at a piano, directly in front of me. The lights and the band members walked out. I soon recognized Christine McVie, walking over to the piano. She was stunningly beautiful. I watched her singing new songs from the recently released album, titled Fleetwood Mac. I was also impressed with Lindsey Buckingham. He started with the Danny Kirwan classic 'Station Man'. Back to Christine. She had an aura about her. I was quickly falling in love. The of the show was great, with Peter Green songs like 'OH Well' and The Green Manalishi'. Superb version from Buckingham. Stevie Nicks did the new single 'Rihannon'. Still, I gravitated back to Christine. I was totally in love with her. To this day, I think back to this show. I still miss her.