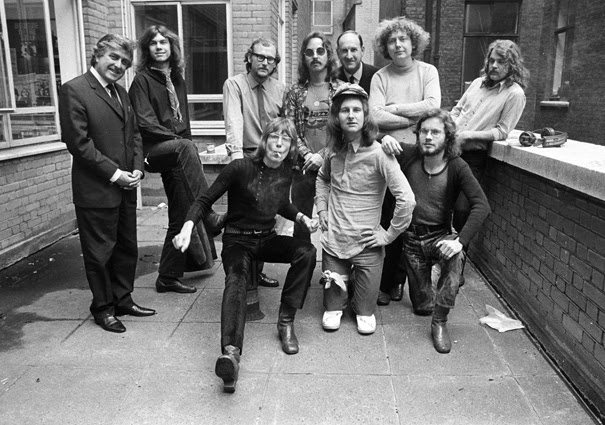 In yesterday’s post I mentioned many of the staff that worked on the paper in 1972, but this picture of us was probably taken in 1971, and apologies to those who’ve already seen it on my Facebook page. It just seemed like a good idea to post it here now, especially as we’re all lined up like the football team I likened us to.
On the back row we have smooth old-timer Laurie Henshaw, folk writer Andrew Means, office manager Roy Birchall, Jason-King impersonator Michael Watts, Chris ‘Any Questions’ Hayes, Chris ‘Raver’ Welch and New Zealander Neil Roberts who was chief sub Alan Lewis’ assistant. On the front row are yours truly, Roy ‘Hollybush’ Hollingworth and Jeff Starrs, one half of the dynamic duo (with Michael Benton) who compiled the charts and maintained our extraordinary filing system. Each week they cut out all the features from MM and filed them away under the names of the artists, an invaluable reference tool for us all. I sometimes wonder what happened to all those files, probably ended up in a landfill underneath the Olympic Stadium. Regular readers of the Raver column might recall that my nickname was meat-pie, for the simple reason that I once ordered one in the Red Lion, the pub behind the office. It stuck too. Wattsy still calls me that. Missing on this day are Ray Coleman, Richard Williams, Alan Lewis and Mark Plummer, which suggests it was taken on a Tuesday, the day when Ray, Richard and Alan would have been at Colchester where MM was printed, and Mark spent the day in bed.
The photograph would have been taken by MM photographer Barrie Wentzell, who is seen below with me. 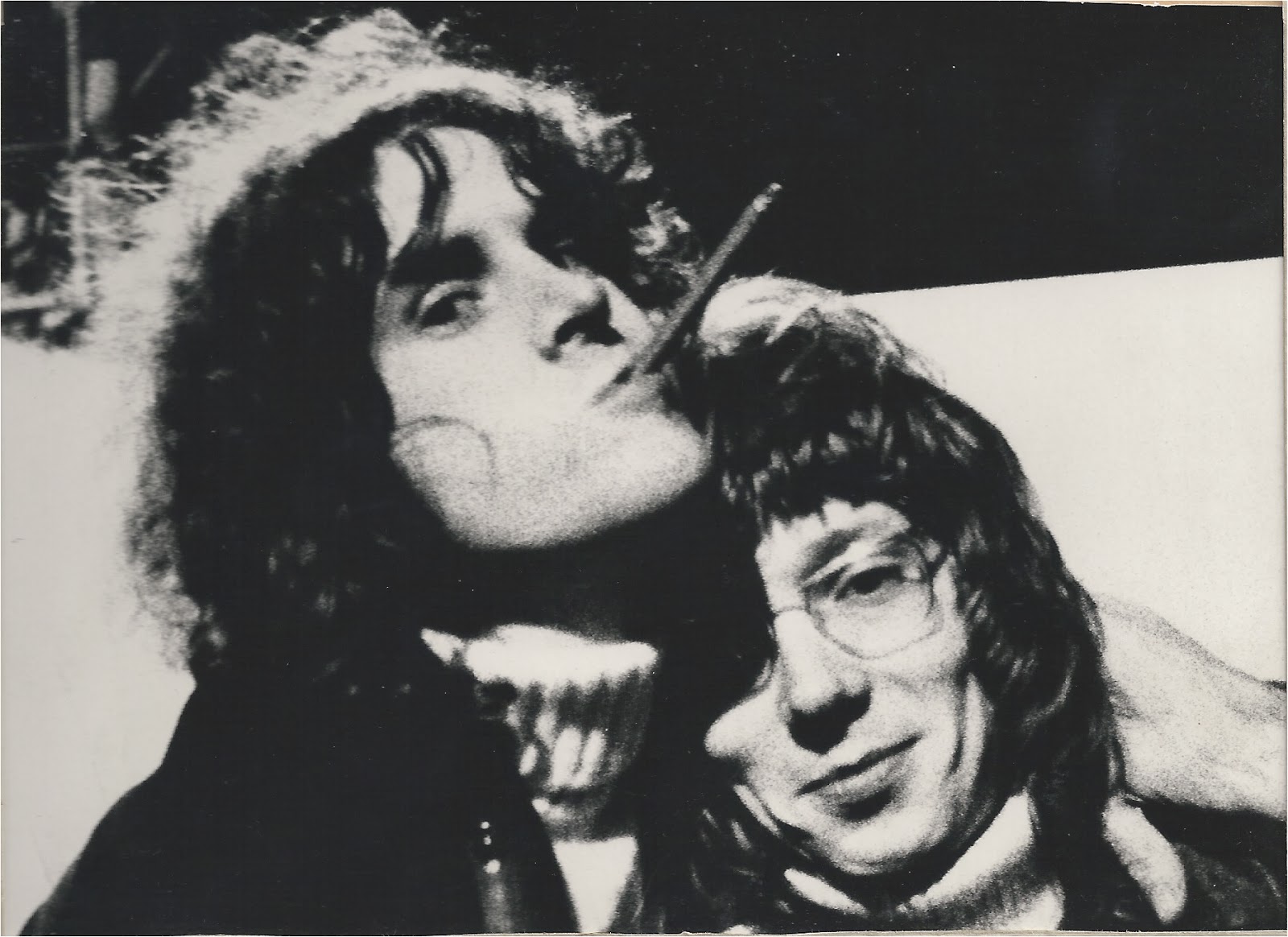 Jill Furmanovsky took this shot of us huddled in front of the stage at the Great Western Festival at Bardney, near Lincoln, over the Whit Bank Holiday, May 1972. We look a bit worse for wear, probably because it was taken towards the end of this three-day event which featured quite a few big acts – Beach Boys, Faces, Slade, Joe Cocker, Genesis, Roxy Music and even the Monty Python’s Flying Circus cast in one of their earliest stage shows.
I remember my pals Slade were a bit nervous backstage because it was a prog-rock/hippie crowd and not the lively younger kids they were used to playing for. They needn’t have worried: 200+ gigs a year for seven years had turned them into a mean fighting machine, and after two numbers the big Lincoln crowd was on their feet having a whale of a time. Slade even brought Festival promoter Stanley Baker, the film actor, on stage to bask in their ovation and in a typically brilliant display of spontaneous showmanship Noddy, who that day wore a badge that said ‘The Pope Smokes Dope’, lead the crowd into the ‘Zulu’ war chant from Baker’s most famous movie.
I went to loads of UK festivals between 1970 and ‘73 (Bath, IOW, Plumpton, Reading, Wheeley, etc) but I was a bit of a ‘champagne’ festival goer in that I always stayed at a local B&B and never on site in a tent. Well, it was hard work covering festivals, all that swanning around backstage and making notes about the bands between trips to the beer tent, so I needed my beauty sleep.
Posted by Chris Charlesworth