THE SCOOTERS FOR KEITH 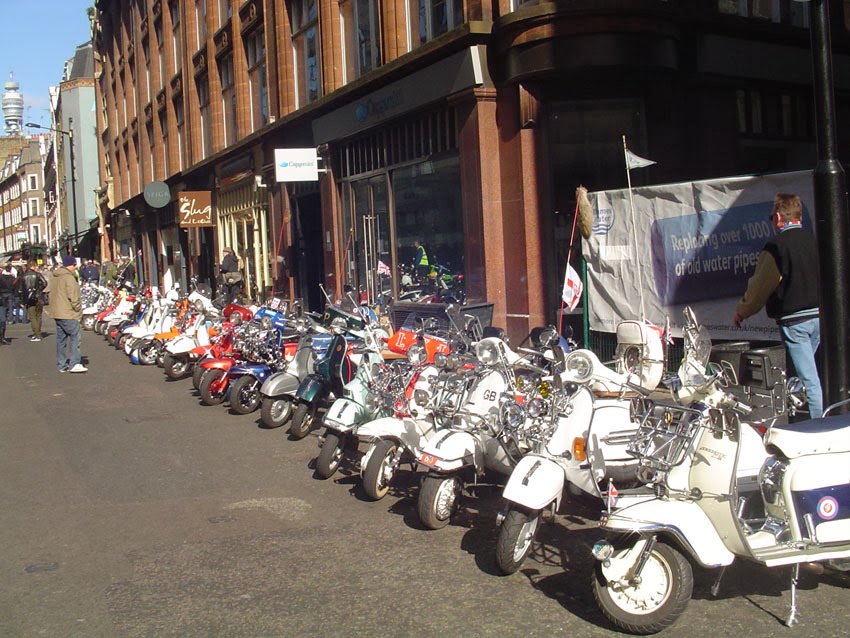 I took this picture on March 8, 2009, at the unveiling of the Blue Plaque for Keith Moon on the site of the old Marquee Club on London's Wardour Street.
All the usual suspects were present: Dougal Butler, Richard Barnes, Irish Jack, Douggie Sandom, Kenny Jones, Zak Starkey and a big delegation of Moons, mum Kit (who’s 93 now) with daughters Leslie and Linda and their children, one of whom (who would be Keith’s niece) looking the spitting image of her uncle. For some reason PJ Proby was there. He looked a bit like what Elvis might look like if he’d lived to be 70, and a few other faces I didn’t recognise.
The plaque was unveiled by Roger Daltrey and Kit who made a little speech in which she said she thought her son was smiling down on us all, and then she and Roger did the honours, pulling the rope that covered the blue plaque. Roger said there should be several plaques around the world, all attached to hotels where Keith misbehaved, and the crowd – which must have numbered 200 or so, almost all of them veteran Mods – cheered.
The row of scooters parked down the street was just so iconic that I had to take a picture and afterwards, when all the old Mods revved up their engines for a symbolic ride past the plaque, the din reminded me of the kind of noise The Who once made. As they made their way up towards Oxford Street, they raised their rights arms in salute to their fallen comrade and I had to wipe the moisture from my eyes.
Posted by Chris Charlesworth

P.J.Proby had been a guest in the stage show "Quadrophenia" back in 1997. He played the Godfather & The Who respected him. The show did some dates in London & then all over Europe plus lots of USA gigs.Proby was brilliant! And when Keith was alive he & P.J. often went out together boozing!