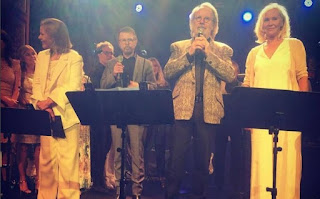 Reports that the four members of Abba performed together on Sunday night for the first time since 1981 seem to have been exaggerated, at least according to my well informed source who was with them at the Berns Salonger, a posh restaurant attached to a hotel in Stockholm. Not only didn’t the quartet all perform together but the songs that were performed, firstly by the boys alone and secondly the girls, were different from those reported in the press.

The occasion was the 50th anniversary of the date when Björn Ulvaeus first met Benny Andersson, on June 5, 1966, at a pop festival on the Ålleberg hill, three miles southeast of the town of Falköping. At the time Björn was a member of The Hootenanny Singers while Benny was the keyboard player with The Hep Stars, and both bands happened to be playing the festival that day. Afterwards, at the hotel where The Hep Stars were staying in Linköping, the two future Abba songwriters were introduced and ended up with playing guitars together, sitting in a park until the sun came up, singing songs by The Beatles and The Kingston Trio.
Not surprisingly Björn and Benny never forgot their equivalent of the Woolton church fete and, on Sunday, 50 years to the day, they were joined by the female half of Abba, Agnetha Fältskog and Anni-Frid Lyngstad, to whom they were once married, to celebrate. That much seems to have been reported accurately enough by the media but that’s as far as it went.
“Contrary to reports, the four of them didn’t actually sing together,” I am told by my spy, who was present at the event. “Agnetha and Frida sang ‘The Way Old Friends Do’ and then Björn and Benny came onstage afterwards. But [there was] no actual group singing. The last number before Agnetha and Frida was Björn singing ‘Does Your Mother Know’ with Benny playing the piano.”
According to the erroneous reports the quartet sang ‘Me And I’, their ‘1980 hit’. Not only wasn’t ‘Me And I’ a hit – it was an album track from the Super Trouper LP, released that year – but they never sang it. “What happened was that the emcee introduced Agnetha and Frida by saying they were going to perform a song called ‘You And I’, which are the first words of the lyrics for ‘The Way Old Friends Do’,” reports my insider. “He should have known better, but there you go. Then one of the guests leaving the party told a reporter outside that they’d performed a song called ‘You And I’. And then the media must have concluded that “there’s no ABBA song entitled ‘You And I’ – oh, I guess they meant ‘Me And I’”. Voilá – a rubbish story is born.”
Just Backdated – not necessarily first with the news but at least we get it right!

Id love to have saw Abba live. I played in Stockholm in a band called The Snipes over a year ago.its a very much Ramones influenced band,with Oi styled stuff included,and a wee touch of cockney knees up music hall thrown in,courtesy of our very much missed frontman and main man Shug O'Neil. We had a day off before we played,and when the young people who brought us over asked if there was anything this mature punk band wanted to do,we rwplied ,to a man "Abba museum"! They thought we were joking at first,but when they realised we were entitely serious,they dutifully took us across on the wee ferrt from Stockholm to the small island which houses the Abba museum. We abbasolutely (sorry:-)loved it . they still couldnt understand why:-) i was the last to leave,partly because i was lost downstairs in true Spinal Tap-esque style,and was caught in a loop in the labyrinth style layout of the place. We had a wonderful time,and a packed out,sold out gig the next night in Stockho!m. Our great friend Shug very sadly passed away in hospital of complications fron pneumonia some months ago,but i know how much he loved those three days in Sweden.we are planning to complete his last collection of songs which we had been rehearsing for a new album before he became too unwell to continue.we will ask guest vocalists from other Scottish punk bands that he eas a fan of to sing one or two songs each.we will also do one final Snipes show with the guest vocalists at an all day tribute show next February in Glasgow.Shug spent a few years as a member of English band Cock Sparra many years ago,and they paid him a wonderful tribute at their headlining show at this years Rebellion festival in Blackpools Winter Gardens. They had huge pivtures of him high above them onstage as they played one of his songs from an album he played on. We will always have wonderful memories of our Snipes trip to lovely Sweden. We managed to get an excellent ,hilarious group shot of ourselves with our heads in the face holes of the large Abba group display outside the museum,and plan to use it somewhere on the final album when it is released. R.I.P Shug O" Neil,a wee punk rock tunesmith if ever there was one.

Your lengthy comment is still there. Maybe it was on twice. That sometimes happens.