BRITISH ROCK IN THE FIFTIES 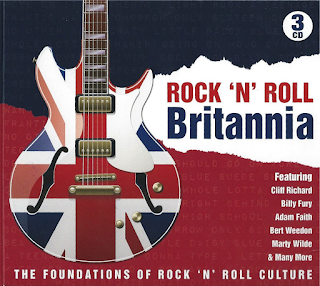 Called upon to edit a book about the history of rock on television earlier this year[1], I was taken back into the world of Six-Five Special, Oh Boy! and Juke Box Jury. These names will ring a bell only to those of us who can remember a time when news presenters, all of them male, wore evening dress to inform us of the day’s events, when Woodbine cigarettes were available in packets of five and when Cliff Richard – believe it or not – was deemed threatening. These were not the only televised shows that featured what was termed ‘beat music’, just the best known, and the book I edited is not a nostalgia fest – it is bang up to date and dwells lovingly on Ready Steady Go! and The Tube, to name but two – but somehow I found myself drawn to the first chapter, about the fifties, for the simple reason that it was all so innocent then and, of course, this was the first rock’n’roll I ever saw, as opposed to heard.

[1] We Hope You Have Enjoyed The Show: The Story of Rock and Pop on British Television by Jeff Evans, to be published by Omnibus Press on September 12.

[2] In the fifties it would probably have been regarded as treason to use Union Jack imagery to promote rock’n’roll. Townshend changed all that.

Three quid on Amazon, it's American counterpart £6.34! Both temporarily sold out...

Of course they nicked the title from the BBC as well as Noel's guitar.

VaporFi is the best electronic cigarettes provider on the market.

Thanks for such a wonderful post.
cheap truss rentals orlando