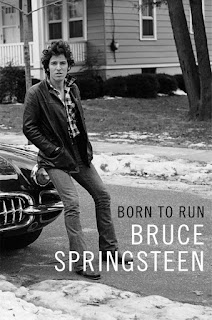 Two of the best Bruce Springsteen shows I ever saw were at Wembley Stadium in July of 1985. They began with a triple blast of ‘Born In The USA’, ‘Badlands’ and, at the first, ‘Darlington County’ or, at the second and even better, ‘Out In The Street’, all three segued together with power, precision and the kind of reckless, aggressive passion that I’d loved with The Who and would have loved with The Clash if only I’d seen them. Then add a touch of Geno Washington’s Ram Jam Band show and double it, because the shows went on forever, or seemed to. It was spectacular and maybe even a bit over-the-top, and I was reminded of this as I was reading Springsteen’s autobiography Born To Run this last month. It too is spectacular and a bit OTT, Bruce letting his emotions rule his pen as he slaps his words down on the page with the same non-stop forward momentum that he brings to his shows. Hold on to your hats readers, you’re in for a hectic ride.
Just like in concert, he gives it all he has and although he has a tendency to overwrite to the extent that it occasionally becomes a bit cheesy, he has a novelist’s gift of putting you in the moment and describing a situation so graphically that you fully understand and experience what’s going on. This can be both personal and professional; when he writes about his difficult relationship with his father, which occupies many pages throughout, or falling in and out of love with Julianne Phillips and, not long after, in love with Patti Scialfa, and watching as their first son is born; or what it’s like to lead a band and appear on stage in front of an audience of 100,000 or more. Indeed, I have never read a more profound description of what it’s like to be a rock star facing massive crowds as I’ve read here, specifically about shows that included those very concerts I refer to above, though in his enthusiasm Bruce states they were in 1984 and not ’85, an odd error considering the attention to detail he brings to the book elsewhere.
Like Elvis Costello, whose book I reviewed here not long ago, Bruce has definitely written this himself, over a number a years, but unlike Costello, who was precise and measured, Bruce is a bit topsy-turvy and inclined to repeat himself. Also unlike Costello, Bruce writes chronologically and he bears his soul far more, most especially concerning the bouts of depression that have plagued him over the years, no doubt inherited from his grumpy, unfulfilled dad. There’s also a refreshing lack of name-dropping, with only rare cameos by stars like Dylan and Townshend and, towards the end of the book, some reminisces of Rock’n’Roll Hall of Fame appearances; Costello, of course, delighted in entertaining stories about his famous friends.
What we learn about Bruce is that he is a restless soul, driven by demons and an almost superhuman ambition that take him onwards and upwards until he becomes the biggest rock star on the planet, a position he doesn’t much like and only grudgingly accepts when he gets there. ‘I didn’t sign up for this,’ is a recurring theme, especially when his private life is intruded upon. He loves to travel, preferably by motor bike, across America’s wilderness accompanied by biker pals that do not share in his musical life. Those that do – The E Streeters – come in for some character analysis that spares few blushes, and it is clear the loyalty runs in both directions. They know who’s the boss, and the boss takes the rap when all is not well. “I was leading the band, playing, singing and writing everything we did,” he writes. “If I was going to carry the workload and responsibility, I might as well assume the power.” Later he adds: “I look back on this as being one of the smartest decisions of my young life.”
Less smart was signing contracts, with early manager Mike Appel on the roof of a car, that would lead to a protracted legal skirmish that delayed the release of Darkness On The Edge Of Town yet, perversely, enabled Bruce to write and record a huge backload of usable material and, since they needed the money, take on a period of backbreaking roadwork that fine tuned the E Street Band for evermore. New manager and producer Jon Landau, he of the notorious ‘future of rock of rock roll quote’ in Boston’s The Real Paper, nevertheless had to inform Bruce that he was down to his last $20k after the Appel business was settled.
There are moving passages on the deaths of organist Danny Federici and, more especially, sax star Clarence Clemons, and a lovely stars-in-his-eyes description of rehearsing ‘Tumbling Dice’ for an appearance with the Stones. There are fine meditations on the arrival of Elvis, the futility of prematurely dead rock stars, the plight of Vietnam vets, band politics, not least the racial mix in his band, as well as exploratory sex and the temptations of booze – Bruce enjoys the odd bender – and every now and then he shows off a lively turn of phrase, like when his dogs raised the alarm after the 1994 earthquake hit LA: “… the mattress beneath us howling like somewhere under there, two pits bulls were fucking a porcupine.”
Like many such books, Born To Run is long on the making it – the scuffling years – and short on more recent glories; to wit, we have 400 pages up to The Ghost of Tom Joad (1995) and only 100 pages thereafter. But compensation for the imbalance comes with the inevitable realisation that the early years are the most interesting. As Bruce himself sang on ‘Better Days’: ‘Now a life of leisure and a pirate’s treasure don’t make much for tragedy.’ Perhaps he’s leaving room for a sequel. Either way, Springsteen has delivered a fine autobiography; candid, honest, revealing and refreshingly light in the self-serving department.

Another great read Chris. My thoughts replicate yours

Great stuff Chris, thanks for the review. My first Bruce show was the end of a 6 night stand at the Philly Spectrum in September 1985. It remains my greatest concert experience (tied with Philly Live Aid). Bruce and Co played almost 4 hours. Came out for a FOURTH encore saying: "This is it. We don't know anymore songs", and they proceeded to tear the roof of with Santa Claus is Coming to Town! LMAO.