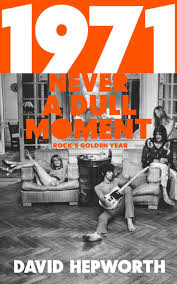 There can’t be many amongst us who haven’t at one time or another wished we could turn the clock back to a period in time when life seemed like a fairground ride. For me, like David Hepworth, doyen of Smash Hits, Q, Mojo and The Word, that period in time might just be 1971, my first full year as a staff writer on Melody Maker, my feet just about under the table, my antenna tuned exclusively into the rock and pop of the day, my work and play focused entirely on and within what the great PR man Derek Taylor called ‘the industry of human happiness’.

I saw The Who perform nine times that year, the last time in Charlotte, North Carolina, on my first trip to America. I saw the Stones and Faces twice, Zep once (at the Marquee, of all places), dozens of others, interviewed McCartney, discovered Slade and, most weeks, was responsible for MM’s front page lead story at a time when its circulation rose to 200,000 an issue. I lived in a flat in Bayswater where free albums galore piled up next to my Dynatron stereo on which Gasoline Alley, Imagine and Who’s Next were on permanent rotation. What a lucky sod I was.
It is Hepworth’s contention that 1971 remains the most important year in the history of rock and his book sets out to prove the point, month by month, album by album, song by song, and he succeeds. Although it focuses on 1971 we read about what went before, insofar as it reached an apogee that year, and some of what went on after, insofar as its genesis can be traced back to that year. It deals with the UK and US rock worlds side by side, skipping across the Atlantic with the regularity of The Who and Led Zeppelin, two of the first three UK bands to realise and take full advantage of the rewards that America offered, both of whom – along with the third, The Rolling Stones – occupy plenty of pages herein.
Hepworth sets out his case with the scholarly logic of a barrister addressing a government inquiry, at least as far as his research is concerned, though he’s a great deal more colourful in his delivery. He writes pithily, often amusingly, and the dry humour makes for an easy, fast read as well as an enlightening one. Setting the scene, he notes that, amongst many other things, there were, ‘no joggers, no health shops, no gyms, no leisurewear, no trainers, no mineral water, no Lycra, no fast food, no obesity’ (my italics).
Clarifying the socio-political and economic importance of Carole King’s Tapestry album in the January chapter at the beginning of the book he notes that for the cover photo King wore, ‘a sensible pullover and jeans, much as she would have done had she been weeding the garden’, a few pages later Bette Midler is precisely sketched with the succinct tongue-twister, ‘saucy tongue sheathed in rouged cheek’, and towards the end we have Mike Love described oh so accurately as The Beach Boys’ ‘most reliable source of embarrassment’. Equally amusing is the suggestion that, for Sly Stone, ‘the many women in his life were giving him grief about the many women in his life’ and that, because Mick Jagger felt it was bad form to be without a girlfriend, ‘This inevitably resulted in periods of overlap which could be fraught’, litotes at its best.
It’s not just the quality of the music that supports Hepworth’s case. It’s the way in which the music is marketed and the way in which those who make the music conduct their affairs and themselves, all of which changed, or deepened, or solidified, in 1971. To this end the long and at times tongue-in-cheek description of Jagger’s marriage to Bianca – ‘the shabbiest bunfight in the history of both rock and marriage’ – which forms the centrepiece of May is not there just for amusement – though amuse it certainly does – but to illustrate how in this period rock stars became the new high society and how the event was as à la mode as debs’ balls or royal weddings.
In reality the book boils down to a series of smartly turned out essays on those acts that held sway in 1971, Hepworth having correctly identified that in many cases this was the year in which they wrote, recorded or released the music on which their careers and reputations have relied upon ever since. In the case of the three British acts I mention above he's not wrong, specifically Who's Next, Led Zeppelin IV and Sticky Fingers, more specifically, ‘Baba O'Riley’, ‘Stairway To Heaven’ and ‘Brown Sugar’. Coming up on the inside are David Bowie, Cat Stevens and Rod Stewart while Marc Bolan – ‘not one for digging out a valuable away point’ – will fall by the wayside. Oddly, the only rising Brit superstar missing from Hepworth’s otherwise infallible summation is Elton John, who also had a pretty good year in ‘71.
So did George Harrison, whose Concert For Bangla Desh provided the template for all future charity rock concerts and which occupies most of Hepworth’s chapter on August. Hepworth notes that this was the first time that Beatles songs had been performed with distinction by anyone other than The Beatles, a hint of the forthcoming realisation that for many acts for whom 1971 was a vital year, the past was the future, especially for The Beach Boys. He points out that heritage rock had yet to be invented, which reminded me that when I watched The Who in Hyde Park in the summer of 2015 I wasn’t alone in noting that the most recent song in their set was 33 years old.
It’s not all about the superstars. Hepworth writes perceptively about many lesser names, among them favourites of mine like Nick Drake, Harry Nilsson and Badfinger; also the labels whose proprietors took chances on acts unlikely to find commercial acceptance, not at first anyway. Occasionally he goes a bit off-piste (as far as 1971 is concerned) by digging back into the past, most noticeably in his history of Motown – he's pro Stevie but a bit anti Marvin – which takes up much of April. Still this is a minor quibble, and I can forgive anyone who writes with calm assurance that, ‘No rock and roll band before or since have been more accomplished live performers than The Who in the years between 1968 and 1972’, a sentiment with which I most heartily concur.
Recommended as a Christmas present, especially for those who bought MM when we sold 200,000 copies a week.

Start following our trades right now & profit up to 270% a day.