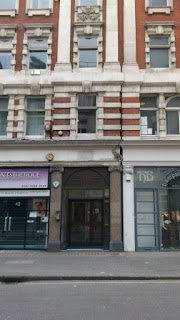 Last night I went back to the Speakeasy again, or at least entered the basement chamber that used to house the Speakeasy, down the same stairs and into the same area where we left our coats and where the names of those who’d passed bad cheques were scrawled on a blackboard, then through the doors and…
It was about 10pm. I was walking from Gt Portland Street to Oxford Circus tube and took a detour down Margaret Street. Outside the awning at number 48 was a crowd of people behind one of those ropes designed to separate smokers from passers by, and there was a stern looking black doorman guarding the old door. Emboldened by drink, for I had been at a Christmas party, I went up to one of the smokers.
“Is that still a club down there?” I asked.
“Yes, why?”
“Well it used to be a very famous club, visited by legendary rock stars back in the sixties and seventies, and people from the music industry, and I used to be a member.”
“Really?”
“Yes, I saw Bob Marley play there once.”
“Bob Marley?”
“Yes. And The Beatles used to go there in the sixties. And the Stones. And The Who. I once saw Led Zeppelin set fire to a pile of money in the dining room. You couldn’t get me inside could you?”
“It’s a private event.”
“I won’t stay. I just want a quick look.”
“OK.”
The doorman smiled at me. I think he’d overheard a bit of the conversation. He let me pass. I followed my new friend down and…
… through the doors and it’s one great big room now, unrecognisable really; no bar, at least not where it used to be on the left as you entered, no dining room where Luigi served the best petit pois and peppered steak in the whole of London, just a big open space though I noticed that at the very far end, where the stage used to be, there was a place where drinks were dispensed. A band with a black girl singer was playing pumped up soul music on a big stage along the wall behind where the bar was. It was very noisy and packed, and the lighting was quite bright, much brighter than it used to be, and I stood there misty-eyed amidst all these people and thought to myself that not one of them would have known the history of where they were partying tonight. I lost my friend in the crowd and was alone, and I stood out because I was more than twice the age of everyone else there. I had a lump in my throat. Must have been the red wine I’d drunk earlier.
I stayed for maybe five minutes, feeling a bit foolish in my big warm coat and scarf amid people milling around dressed for a party. A few people stared at me, wondering who this old geyser was, and I’d have chatted with anyone who wished but the music was too loud for conversation. So I left, climbed up those stairs again and into the night. The doorman smiled at me.
“Is it like you remember?” he asked.
“No. Not at all.”
“Did Bob Marley really play down there?”
“Oh yes. I was there. Jimi Hendrix too, though I never saw him myself.”
“Hendrix? Really?”
“Oh yes, g’night.”
“G’night.”

Oh 'the board of shame', but as we know there were many that had none!

You can hire it if you want...

Ha! All things change. Remember great gigs there with CW ; Curtis Mayfield, Jeff Beck and, when you're hungry at 2h in the morning, the least expensive thing on the menu was a corn on the cob ...

as i was the singer from heaven, we used to play there often, the o'leary brothers were great friends , and louigi, what a star, later he opened his own restaurant in kings road, great memories,

Start following our trades NOW and gain up to 270% a day.