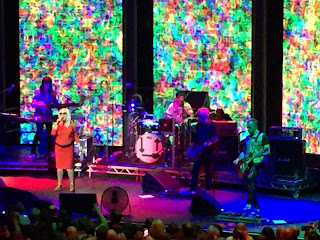 Anyone labouring under the misapprehension that Blondie is an oldies act sustaining their career into the 21st Century by relying on a catalogue of juicy hits from yesteryear would have been rudely awakened at London’s Roundhouse last night. The group’s tight and assured 15-song set included no fewer than five new songs from the album Pollinator, due for release tomorrow, and it must have been heartening for them to observe how the packed crowd responded, evidently enjoying the new material almost as much as they did tried and tested favourites like ‘Rapture’, ‘Heart Of Glass’ and ‘Atomic’. This probably had something to do with the fact that they sounded a bit like Blondie of old, of which more later.

Indeed, it is a tribute to the confidence of the present-day Blondie that three of their biggest hits – ‘Sunday Girl’, ‘The Tide Is High’ (both UK number ones) and ‘Denis (Denee)’ (their UK chart debut at number two) – went unplayed. This is a supercharged, thoroughly modern Blondie, match fit through extensive touring; together now since 2010, when guitarist Tommy Kessler replaced Paul Carbonara, joining the core trio of original members – singer Debbie Harry, guitarist Chris Stein and drummer Clem Burke – alongside relative newcomers Leigh Fox (who arrived in 1999) on bass, and multi-keyboard player Matt Katz-Bohan (2008).
Arriving on stage promptly at ten minutes to nine the group tore into ‘One Way Or Another’, the same opening song as when I last saw them about two and a half years ago at this same venue. On that occasion it was a double bill with Chrissie Hynde, who opened the show, but this time Blondie were on their own, poised and in command of the stage from the outset, and after a slight adjustment to the sound levels – up in the balcony I couldn’t hear the vocals at first – we had lift off.
Throughout the group played before a backdrop that alternated between futuristic films of the sci-fi variety and footage from their first flush of success, and for the first four songs Debbie chose to wear a black smock with the legend ‘Stop Fucking The Planet’ over her red dress, leaving little doubt about her attitude towards the current incumbent of the White House. Almost 40 years to the day from Blondie’s UK debut (Bournemouth, May 17, 1977), their singer is a legend now and rightly so, but she’s no Greta Garbo, shrinking into a closeted hinterland of introspection to grudgingly observe the many who have jumped on the bandwagon she herself launched. Using the whole of a large stage to greet her fans, she has an affable, warm personality that comes across rather like a favourite aunt, the one in whom you could confide when you were a teenager. As I noted at that earlier show, however, she is still as pretty as a picture, an ageless miracle in fact, her peroxide blonde hair falling over her shoulders and shimmering beneath the spotlights as she sings. Her voice is in good shape too, with solid vocal back up from Stein, Kessler and, most especially, Katz-Bohan. Immediately behind her Clem Burke is fronted by a transparent Perspex screen and from where I was sat it was possible to make out Debbie’s rather ghostly reflection when she was stage centre and the lighting just so. I suspect she wasn’t even aware of the effect.
‘One Way…’ was followed by ‘Hanging On The Telephone’, preceded by a brief explanation from Debbie about the nature of phones in the era it was recorded (1978) in case any in the mobile-fixated audience found the lyrics bewildering. Next up was ‘Fun’, the first of the five new songs and, like the others (‘My Monster’, ‘Fragments’, ‘Long Time’ and ‘Gravity’), it was clear that the group is seeking to replicate the power pop sound with which they triumphed in their heyday. Less experimental in tone and with more emphasis on uplifting choruses, they sound like the Blondie of the late seventies, though ‘Fragments’ goes through varying tempos, and a keyboard solo in ‘Long Time’ sounded like the theme from one of those old westerns when a male voice choir serenaded a coffin up Dead Man’s Hill. 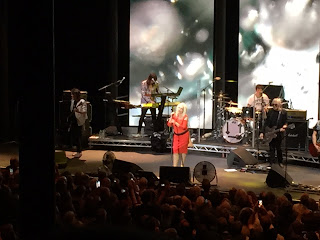 Judiciously blended with the new material were old favourites like ‘Call Me’, which featured Katz-Bohan soloing on one of those portable keyboards around his neck; ‘In The Flesh’, their first hit, given a slow, dramatic but slightly ponderous reading; and ‘Rapture’, which as before segued into ‘Fight For The Right To Party’, a rap extravaganza reflecting Blondie’s early pioneering of this style. It gave Chris Stein a chance to solo, playing with harmonics and feedback, his most upfront contribution to the evening, while Clem turbo powered consistently from the back.
These days Stein seems content to play a supportive role in the stage group, the wise old lion looking on while the younger cubs prance around. ‘Rapture’ aside, he confines himself to chords and riffs, usually on the lower strings on his guitar, cool as ice, permanently shaded, his hair white now, the soul of the group. His fellow stalwart Burke, on the other hand, is still the band’s engine room, unrelenting, staunch and sturdy. I probably wasn’t alone in noticing that Clem wore a New York City t-shirt in the design favoured by John Lennon that for the encore he had changed to one emblazoned with the logo of CBGBs. Always the Blondie man most respectful of rock’s past, he is a showman drummer in the tradition of Keith Moon, chucking his sticks into the air, tumbling around the kit and at one point adopting one of those Moon poses with one arm high in the air and the other at right angles. He is largely responsible for bringing many of Blondie’s songs to a thumping close, soloing briefly before the final crashing chord, and tireless throughout.
A glorious ‘Atomic’ proved a crowd favourite, greatly extended as Tommy Kessler, as skinny as a whippet, played the guitar hero in an expanded coda, ending up on top of a speaker cabinet and playing behind his neck while Debbie watched from the side, content to let the spotlight fall elsewhere. ‘Heart Of Glass’, more muscular than the discofied hit single, brought the set proper to a close before a three-song encore that opened with ‘Maria’, another sing-along, and closed on a full-tilt ‘Dreaming’, Clem as busy and irreplaceable as ever.
Ninety minutes had passed remarkably quickly, and on my way out I found myself in step behind Keren Woodward, Sarah Dallin and Siobhan Fahey, the reunited Bananarama, unchaperoned and no doubt deep in thought after watching Debbie Harry and her men demonstrate how it should be done. If Bananarama can muster up half the panache of Blondie they’ll do ok.