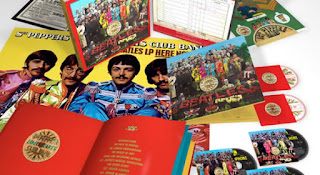 It is, without doubt, the most famous album of all time, though whether it is the best is still being debated. Marking the 50th anniversary of Sgt Pepper’s Lonely Hearts Club Band’s release tomorrow comes a special edition*, like all such artefacts a lavish affair available in different formats and price ranges, from a deluxe multi-disc package at £109.99 to a humble single CD that is £100 cheaper. All promise enhanced sound and most a selection of outtakes and alternate versions of the songs that famously promised to ‘guarantee a splendid time for all’.

Whatever its musical merits – and they are considerable – the album represented a high water mark in The Beatles’ career, the culmination of their precedent-setting decision to abandon touring and devote all their energies to working in the studio. With more time on their hands to write, record and experiment, The Beatles created an album that somehow encapsulated 1967’s Summer of Love to perfection, and through its production, artwork and timing, not to mention the pre-eminence of its creators, screamed its supremacy from the rooftops.
In 1967 it was simply unthinkable not to like Sgt Pepper. Its absolute dominance prompted Rolling Stone’s Langdon Winner to write, without irony: “The closest Western Civilization has come to unity since the Congress of Vienna in 1815 was the week the Sgt Pepper album was released…. For a brief while the irreparably fragmented consciousness of the West was unified, at least in the minds of the young.”
Largely the creation of Paul McCartney, who devised the concept and contributed the lion’s share of the songs, Sgt Pepper was conceived as an integrated work with none of its tracks released as singles. Nevertheless, many have become as well loved as any of the group’s chart toppers: the opening title track, reprised later, a delicious hors d’oeuvre in which the songs are framed; Ringo’s agreeably light-hearted ‘With A Little Help From My Friends’, later covered imperiously by Joe Cocker (with Jimmy Page on guitar); John’s surreal, acid-drenched ‘Lucy In The Sky With Diamonds’ and playful fairground pastiche ‘For The Benefit Of Mister Kite’; George’s deeply contemplative Indian raga-like ‘Within You Without You’; and Paul’s poignant ‘She’s Leaving Home’, his elegant meditation on the alienating impact of the generation gap, and chirpy ‘When I’m Sixty-Four’, a throwback to his love of music hall. Above all, though, Sgt Pepper brought us ‘A Day In The Life’, an elusive fragment of spectral reportage that is now widely recognised as the greatest track The Beatles ever recorded. A genuine collaboration between John and Paul at a time when they were increasingly writing apart, no other song of theirs contrasts their differing styles so boldly yet at the same time combines them so flawlessly. “It remains the most penetrating and innovative artistic reflection of its era,” wrote critic Ian MacDonald in Revolution In The Head, his definitive analysis of the music of The Beatles. “[It is] their finest single achievement.”
In hindsight, however, Sgt Pepper’s greatest strength was not the songs contained within Peter Blake’s famously colourful gate-fold sleeve or even its role in briefly unifying the world’s competing ideologies. Primarily, Sgt Pepper was the first LP to draw a line between ‘rock’ and ‘pop’: from now on there would be a conspicuous distinction between ‘rock bands’, of which The Beatles were the leading role model, and ‘pop groups’, which was all those unwilling or unable to follow them along the road to something more profound, a better world in many ways but one that lacked the joyful innocence of simply wanting to hold your hand.
Either way, after Sgt Pepper, nothing would ever be the same again.


* I am reassured that the new edition does not contain ‘Penny Lane’ and ‘Strawberry Field Forever’, as suggested by earlier reports and denounced by me in a post on Just Backdated on March 3. Evidently these two tracks will be on another CD within the package, along with other ‘extras’.
Posted by Chris Charlesworth