THE WHO: I WAS THERE by Richard Houghton 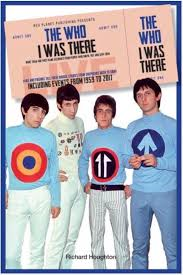 It is a tribute to the affection that The Who have inspired in their fans over the years that a book like this can exist. I doubt any group before or since has rewarded its fans in the way that The Who did, and continue to do for that matter, and by this I mean how The Who performed on stage, offering their fans all those simply staggering shows, especially when they were in their prime. To have seen The Who between 1968 and 1976 was, on most nights, to witness the very best rock shows ever, with fans shaking their heads in disbelief as Pete, Roger, John and Keith put on displays of such panache, skill and excitement that no one has ever been able to match. Only those who were there know what I am talking about.
These fans like to talk about it too, they like to share their memories just as I do on this blog. I Was There is simply a massive collection of eye-witness accounts of Who concerts, from a few who saw them as The Detours in 1964, all the way through the glory years to a show in March of this year, 445 fun-packed pages of show reports, many recalling personal stories about getting to and from the gig, the massive thrill of it all, and most are illustrated with pictures of these fans whose reminiscences Richard Houghton has lovingly assembled for his book.
For the most part, of course, the fans are overwhelmingly positive about the shows they saw, and even after many years they seem able to recall in extraordinary detail the songs, the performances, the clothes they and the group wore, and even what was said on stage. Although most are from boys (men now of course), a decent proportion are from girls, many of them besotted by Roger, but this does put to the sword the oft-repeated falsehood that The Who was a ‘man’s band’. A good proportion of the fans describe the Who concert they saw as the greatest concert they ever saw in their entire lives. A few got to meet or exchange a few words with the group before or after a show, and it’s nice to read about how in the early days a member of The Who would sometimes allow a penniless fan into the venue through the stage door if he or she pretended to be a member of their road crew.
Certain insight are fascinating. “They were in a different league altogether,” recalls Richard White, a member of a semi-pro band that supported The Who at the Goldhawk Road Social Club on 31 July, 1964. “They used to do a really powerful version of ‘Ooh Poo Pah Doo’… they used to give it the full Who treatment, with crashing guitar chords and Keith Moon thrashing around his drum kit. [Pete] told me they’d worked on Roger’s voice. It was too high-pitched for them at the time and they wanted to bring it down a bit. They did it by getting him to sing into a tape recorder.”
Or this one from Alex Wilson, a drummer, from 26 April, 1969, at the Community Centre in Auchinleck in Scotland: “[Keith] went through dozens of drumsticks during the gig, while I’d make one set of mine last months. At the end of the night I was speaking to Keith and he asked if I needed any sticks or drum parts. He gave me about 30 pairs of sticks and a bass drum pedal. Both lasted me for years and I still have the drum peal to this day.”
“I remember it as an outstanding and breathtaking performance,” recalls Steve Davy of The Who’s set at the 9th National Jazz & Blues Festival at Plumpton on 9 August, 1969. “It was one of those performances that had an exceptional magic about it.” I can confirm that view as this was the first time I’d seen The Who live myself, so it’s nice to know that Steve and I were on the same wavelength. So impressed was I with that Who show that afterwards I determined to see them as often as I could in the future, over 30 times until Keith died. In some respects seeing The Who’s astounding performance that Saturday night was the impetus I needed to apply for a job on Melody Maker the following year. I simply wanted to be a part of something as wonderful as this.
There are reports from many famous shows: Woodstock, The Oval, the notorious San Francisco show where Keith collapsed, the football stadiums in the seventies, Wembley Stadium with Kenney Jones, the tragedy in Cincinnati, the first show without John, Mexico City and a recent Albert Hall show. Sensibly, however, author Houghton has concentrated on the Moon years, with only the last 40 or so pages of his book devoted to post-1976.
The Who: I Was There is not really a book for the casual fan, only us obsessed devotees. Fortunately there are enough of us, as reflected in its pages, to ensure its success. It’s a labour of love, and no band was loved more for its live shows than The Who.

Get professional trading signals delivered to your mobile phone every day.