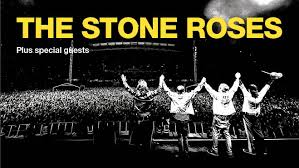 To Wembley Stadium for my second exposure to Big Rock in only as many years, my companion my daughter who acquired two tickets as a surprise treat for her dad but declined to tell me who we were going to see until we caught the train at Marylebone Station when it became obvious from the hordes of passengers wearing Stone Roses T-shirts. They’re a band whose records I love and whom I’d always wanted to see but never had the chance.

Olivia somehow got the seats in a charity raffle and mighty good they were too, a few rows back from the pitch around the halfway line, immediately behind the VIP box where David Beckham, who must have felt at home in these surroundings, and two of his sons took their seats a few minutes before the Roses hit the stage, Posh no doubt staying at home to catch up with the ironing. There was a palpable sense of occasion in the huge arena, the sell-out crowd of 90,000 basking in the warmth of the evening, a perfect night for an outdoor stadium gig. This was the first time I’d been inside the ‘new’ Wembley which towers up far higher than the old one, not that all the seats were filled – just that so many had come down on to the pitch, a massive throng of Roses fans crammed in closer and closer as they neared the big stage. They gave support band Blossoms a decent ovation too, probably for their bravery in facing down a partisan crowd intent on being adored or feeling the earth begin to move. We heard only three of their songs but I liked what I heard and the singer looked a dead ringer for the sort of bands I used to write about the seventies. Earlier The G-O-D and Sleaford Mods had played as the crowd filed in, a thankless task if ever there was one.
Heralded by The Supremes singing ‘Stoned Love’, the Roses arrived on stage at 20.54, ambling on as if they’d just got off the Wembley Park-bound 206 double-decker. They are a no-nonsense outfit, making little effort to endear themselves to their vast audience, though they do so anyway; none of that ‘Great to be here at Wembley’ nonsense, a total absence of grandstanding as they treat it like the back room of a Manchester pub and, very sensibly, open up with ‘I Wanna Be Adored’, track one side one of the wondrous album that rocketed them to greatness and which, with ten of its 11 songs performed tonight, formed the backbone of the evening’s set.
Ian Brown resembles someone looking for a fight, his dour countenance made all the more menacing by his relatively short hair, now turning grey. He’s wearing a white bomber jacket with a logo that says ‘Research And Destroy’ but it still looks like something he could have picked up in a charity shop for less than a fiver. He walks around the stage a lot but doesn’t communicate much, introducing one song – I forget which – as ‘one for a mate who owes me fifty quid’ and another – I think it was ‘This Is The One’ – as ‘for my mum’. I certainly wouldn’t want to be the bloke who owes him the bullseye. Brown’s voice, never the most tuneful arrow in their quiver, hits the right notes around 95% of the time, but its often rather grim monotone can be overlooked amidst the hooks and all-round contagiousness of the catchy choruses in almost all the songs they play.
Bassist Mani is another character I wouldn’t want to mess with at closing time, a beefy fellow with tough looking lines on his face who leans back slightly as he plays, like one of those Russian dolls that won’t fall over, alternating between two Fender Jazz basses that he plucks with a plectrum when a prominent bass line demands it, then switches to plucking with his fingers when a more rhythmic feel is required. Like John Entwistle, he keeps a low profile stage left, rooted to a spot a few feet in front of his sturdy bass cabinets, deadly but far from silent.
Renni is a tour de force at the back, his drum patterns a key element in Stone Roses songs that veer from the funky dance workouts redolent of the Madchester era to the power pop and tougher stuff that enabled this group to rise above bands like Happy Mondays and Inspiral Carpets. For the first half of the gig he wore a black turban which must have been awfully hot on this balmy June evening, switching later on to the white bucket hat he always used to wear and which many in the audience do too. He added a welcome second tier to the vocals, singing through one of those tiny microphones attached to a clip from beneath his turban.
Finally to John Squire, for my money the star of the show, an effortlessly skilled yet unshowy guitarist who simply gets on with the job, reproducing all those sinewy little guitar lines that underpin the best of the Roses’ songs. Not for him the ostentatious pomp of so many of his peers, none of that bending a sustained note on the top strings a few frets above the 12th and looking as though he’s in agony doing so, no windmills, guitar punching or left-hand-only stuff with added wiggly bits. Squire employed four guitars, two Strats and two Les Pauls (but no big white Gretch or Jackson Pollock dappled ES35), some with capos on the neck, and it was pleasing to note that it was him and him alone playing; no additional touring guitarist to beef up the sound, just him alternating lead lines with chords and riffs, a dazzling display modestly assumed. On at least three songs, ‘Waterfall’, ‘Begging You’ and, of course, ‘I Am The Resurrection’, he played extended groovy codas but didn’t even bother to take a bow, just smiled a little behind the hair and beard that obscured his face. 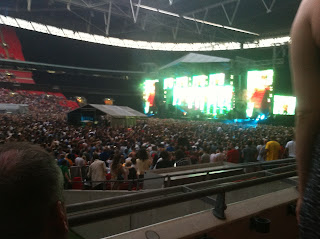 As stated, the meat and potatoes of the evening’s set was The Stone Roses LP, ‘Adored’ followed by ‘Elephant Stone’ and all the rest bar ‘Bye Bye Badman’ given an airing as the night progressed. From elsewhere we got ‘Sally Cinnamon’, ‘Mersey Paradise’, ‘Where Angels Play’, ‘Begging You’, ‘Fools Gold’, ‘Love Spreads’, ‘All For One’ (the only song with which I was unfamiliar) and ‘Breaking Into Heaven’. It was high energy all the way, and if there was a low point it was in those songs from Second Coming that descend into a sort of sub-Zeppelinesque bluesy thump as opposed to the springy ingenuity of their earlier material. I don’t include ‘Breaking Into Heaven’ in this but I’d have welcomed ‘Ten Storey Love Song’, a huge favourite of mine, over ‘Begging You’ and ‘Love Spreads’.
They were fabulously loud and rightly so. The crowd favourites – ‘Elephant Stone’, ‘Waterfall’, and the five-song closing sequence of ‘Made Of Stone’, ‘She Bangs The Drums’, ‘Heaven’, ‘This Is The One’ and, inevitably, ‘I Am The Resurrection’, inspired mass sing-alongs and air punching, and no matter how many times I’ve seen it there’s something awfully uplifting in watching so many people having such a wonderful time while music as good as this is pumped out of massive speakers at a volume we can only dream about at home. The solo on ‘She Bangs The Drums’, always a high point for me, was executed perfectly by Squire, so much so that the audience sort of sang along to it, a kind of ba-ba-ba ba-bi-ba-ba sound, and as they did so it struck me that that this marvellous little guitar part in one of the Roses’ greatest songs might just be a great-grandchild of Townshend’s riff in ‘So Sad About Us’, remade and remodeled by the Roses.
‘Resurrection', of course, was the only possible climax, 90,000 voices singing the ‘Don’t waste your words’ lines until, after three verses, the song explodes into the title line and chorus at which point the stadium was lit up on all sides as Squire eased into the funky coda to which all of us danced the night away. This was daughter Olivia’s first ever stadium show and from the look in her eyes I know it won’t be the last, though it’ll be her boyfriend and not her dad dancing alongside her next time.
And then, quite suddenly, it was over. The gig ended rather abruptly at 22.23 after the false ending of ‘Resurrection’ and there was no encore. The Roses had been on stage for just less than 90 minutes, quite a brief set by stadium standards though it didn’t seem so because they’d played so many songs, 17 in all, that so many fans wanted to hear so much. Oddly enough, no one asked for more either, and in front of us Beckham and his boys legged it as fast as he ever did advancing towards the goal area on Wembley's pitch. In truth, it was hard to know how the Roses could follow ‘Resurrection’ so they didn’t try. There was, of course, a rational suitability in ending the night on the closing song of that sparkling album, just as its opener had began it.
Finally, I couldn’t help but wonder why the Roses haven’t been booked for Glastonbury. Now match fit and geared up for gigs this size, they’d surely be a better bet than Foo Fighters for the Pyramid stage on Saturday night. This is the one they’ve waited for Michael.

Follow our signals right now and profit up to 270% daily.