CAN'T STAND UP FOR FALLING DOWN: Rock’Roll War Stories by Allan Jones 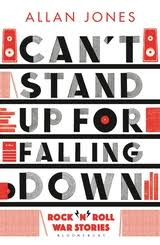 The Age Of Deference had yet to lapse when I joined Melody Maker in 1970. Four years later, when Allan Jones joined the paper, that era was withering on the vine, rendered obsolete by the New Musical Express writers Nick Kent and Charles Shaar Murray. MM, its circulation in decline and about to be surpassed by NME, needed to counter attack and Jones gamely volunteered to go into battle or, as he put it in a letter to editor Ray Coleman, be the gun whose trigger needed to be pulled. Much to his surprise, considering his lack of experience in our trade, Coleman gave him a job.

Aged 21, highly opinionated and disinclined towards MM’s staple diet of sound musicianship coupled with reverence towards those who displayed it, Jones was a square peg in a round hole when he arrived, viewed with deep suspicion by his immediate superiors, features editor Chris Welch and assistant editor Michael Watts, then and now both close friends of mine. But Watts, though a tad imperious in his dealings with junior staff, knew a good thing when he saw it and recognised in Jones a rebellious spirit that might just counter NME’s offensive. Watts and Coleman were right and in time Jones would rise above us all*, becoming MM’s editor in 1984, a position he held until 1997 when he became the founding editor of Uncut. None of these career advancements, however, would alter his innate lack of respect for the high and mighty of the rock world, and while at Uncut he wrote a shoot-from-the-hip monthly column called Stop Me If You’ve Heard This One Before which, in revised form, is the basis of this book.
That Jones survived his 40-year stretch on the front line of UK rock journalism is something of a miracle; not just the fierce and sometimes violent reprisals of those he mocked but the colossal intake of drugs and alcohol that was necessary to numb him against the slings and arrows launched by stars like Tony Iommi, Roger Waters and Lou Reed. It was also, of course, an era when the largesse – booze, slap-up meals, travel, freebies galore – doled out by record companies reached herculean proportions, as I know from first-hand experience. Either way, we are fortunate that Jones did survive, living to tell the tales between these pages, his recollections of more than 70 encounters with rock musicians from his MM years, each one four or five pages long which makes it an ideal book for dipping into. The vast majority of these encounters, of course, did not pan out in the way that the artists or the music industry machine intended, many of them ending in confrontations of some sort, hence the subtitle Rock’n’Roll War Stories. 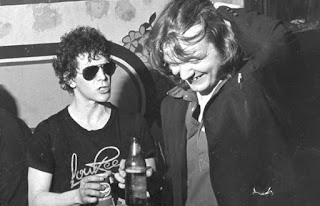 First and foremost, it’s bloody hilarious. I was laughing out loud as I turned the pages, skipping through stories about Alex Harvey’s threat to knife The Doobie Brothers, Bryan Ferry’s pretentious gaucho outfit, Patti Smith’s disrupted press conference and Gregg Allman and Cher’s marital discord. Jones had a knack for getting into scrapes, for finding himself in situations that required delicate handling which he was unable to execute because he was undiplomatic by nature and almost always far too intoxicated. Like Keith Moon, he didn’t seem to know the meaning of the word embarrassment. (There are no Who stories, by the way.) But getting in and out of tight spots is only half the fun: he’s a great comic writer, perhaps the funniest of us all, a dab hand at a droll turn of phrase: Van Morrison, for example, looks at Jones “like I’ve just sold his children into slavery”, Lemmy “looks like someone who hasn’t slept since the earth cooled”, while in Lake Tahoe on an assignment to interview Olivia Newton-John, hardly his specialist subject, Jones finds himself in a hotel suite “as big as a housing estate” where he orders a Neptune salad, “and end(s) up with Kew Gardens on a plate the size of an ice-rink”.
Back in the real world, Jones was drawn towards pub rock and its aftermath, punk, but always seemed at his happiest in the post-Pistols new wave that created artists like those signed to his beloved Stiff Records, Elvis Costello and Nick Lowe, and groups like The Pretenders, XTC and Squeeze. An early introduction at art school in Newport to Joe Strummer, then John Mellor but known to one and all as Woody, grants him an entrée into all matters Clash, about whom Jones writes with great authority. His girlfriend at the time gave Joe his first rockabilly haircut but this and encounters with The 101’ers fail to impress Bernie Rhodes, their manager, who insists, Trump-like, that anything pre-Clash is fake news. Rhodes is just one of many rather unpleasant characters from the rock world, not necessarily musicians, that suffer at the hand of Jones’ penmanship.
In many ways Can’t Stand Up For Falling Down has a touch of the Hunter S. Thompson about it. Like Thompson, Jones tells it how it is and not how the PRs would prefer it to be told. The rock stars and other characters that people his stories, however, are individuals, not creations of a marketing meeting, and all, bar perhaps Tony Iommi, are the better for it. It’s long been my contention that most rock stars would look better in print if they ditched the spin and came across as they really are and not how some PR thinks is best for their public image. In Jones’ book all their faults and flaws, their egos and angst, their failures and sometimes their triumphs, are exposed for all to see – and most of the time it does them no disservice at all, meaning we laugh with them and not at them. There’s a lesson here, as well as a damn good read.


* At the time I was MM’s US Editor, stationed in New York, and although I came back to London from time to time Allan and I never worked together in the same office.
Posted by Chris Charlesworth

I see your blog regularly.your blog is very useful for us & i like it very much.Click here

If you need your ex-girlfriend or ex-boyfriend to come crawling back to you on their knees (no matter why you broke up) you gotta watch this video
right away...