DAVID BOWIE: I WAS THERE by Neil Cossar 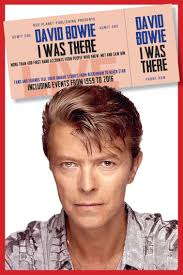 In June I reviewed on Just Backdated a book called The Who: I Was There, suggesting that it was a tribute to the group that their fans would contribute to a book of this kind and that only The Who inspired such affection from their followers. I was wrong, of course; so did David Bowie as this enjoyable book in the same series by a different author shows. (I contribute the introduction to this book, a slightly amended version of the text I wrote for a songbook that was published by Music Sales shortly after Bowie’s death in 2016, and which you can find elsewhere on this blog.)