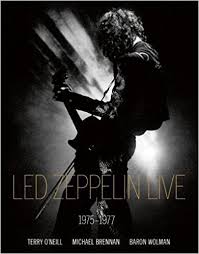 Joining the shelfload of books published to coincide with the 50th Anniversary of the birth of Led Zeppelin is this upmarket coffee-table photo book featuring the work of Terry O’Neill, who has the lion’s share of pictures within its pages, Michael Brennan and my pal Baron Wolman who, by the way, was actually christened Baron and is not a member of the feudal aristocracy. Accompanying the best part of 200 pages of pictures, all but Woman's black and white, are text and captions written by Dave Lewis, founder, proprietor, editor, principal contributor and energetic promoter of Tight But Loose, the fanzine and website that stimulates interest in Led Zeppelin with the same kind of zeal that fired the group when they launched into ‘Rock And Roll’ at the start of many of the concerts covered herein.
O’Neill’s shots are from concerts in May 1975 and June 1977, Brennan’s from January 1975, and Wolman’s from July 1977, the latter the two concerts in Oakland, California, that brought down the curtain on Led Zeppelin’s record breaking and occasionally lubricious love affair with America. And pretty much every picture in the book is a fine example of the photographer’s art, so much so that it becomes clear that so long as your camera was in focus it was pretty hard not to take a decent photograph of this group when they were strutting their stuff, as reflected in the occasional spreads of contact sheets where all that separates the great shots from the good is the exposure, from which we can deduce that stage lighting impacted on the finished product, as perhaps did adjustments to the exposure and aperture of the cameras used.
Here are the highlights:
O’Neill: Jones so clear you can count the hairs on his head on page 24, Page the same on 25, and the Plant spread across 28-29, the latter leaving no doubt as to the singer’s masculinity; Page on 43, scraping his violin bow in the mist, Plant on 51, beckoning with his index finger in that peculiarly idiosyncratic way of his; Plant and Page together on 55, singing the chorus of ‘Whole Lotta Love’ (the only point in their shows during this period when it was possible for photographers to snap their heads together); Page on 67, on one leg, his body shifting in the opposite direction to his twin-necked guitar, which must surely have strained his skinny hips; Plant across 68 & 69, close up, giving his all, and over the page on 71, as handsome as handsome gets; a group shot across 83 & 84 during the acoustic interlude, Plant grinning across at Bonham, probably urging him not to sing; Jones on 89, a study in concentration on his peculiar triple-necked instrument; Bonham a blur on 92 & 93, maximum effort albeit perhaps a tad overweight; and 105, Plant all smiles, confidence abounding.
Brennan: Bonham on page 117, in the dressing room, contemplating, perhaps – as he occasionally admitted – suffering a touch of stage-fright before the show; the crowd shots from the stage on 122, 123 and across 124 & 125, so close they could reach out and touch whatever Page and Plant wore on their feet; the spread on 131, Page arching backwards as if performing the limbo; and leaving the stage on 146, another triumph; Bonham, head down, eyes shut, keen to get away, Plant a bit lost behind him, and, over the page, Page, grinning, still carrying his guitar, giving a thumbs up to the faithful, yet no sign of Jones who as likely as not was already on way his back to their hotel. (Brennan’s shots were taken on a tour that I briefly joined and also include a few taken on the Starship, their private plane, all of which brings back a few memories, reports of which can be found elsewhere on this blog.) 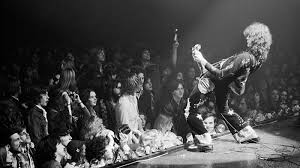 Wolman: Plant on 153, another warm and smiley shot; Page’s eight guitar arsenal awaiting its master stageside on 154 & 155; Page on 167, crouching like the phantom snakes on his black and gold suit; Page and Plant on 183, the former reaching up for a note somewhere in the Gods; and, finally, the view from the audience on 186 & 187, the strange, slightly absurd Stonehenge stage, constructed no doubt by Bill Graham, that reminded me rather too much of the absurdities in Spinal Tap.
Those familiar with the look of Led Zeppelin will recognise many of these photographs from other books and magazines but O’Neill’s in particular have been largely under wraps for 30 years or more, so it’s nice to finally see them again. We are perhaps fortunate that Zep worked in an era when photographers were not as restricted as they are today, nor managements – even Peter Grant! – so eager to control what would become known as image rights, with the result that 45 or so years down the line we can observe Led Zeppelin in their pomp on so many wonderful photographs like those in this book. O’Neill, Brennan and Wolman are part of an honourable platoon of photographers who captured Led Zeppelin for eternity, among several others that include Neal Preston, Bob Gruen, Barrie Wentzell, Michael Putland and Barry Plummer. Bearing in mind the ‘security’ – and I use in the word without my tongue in my cheek – that surrounded Led Zeppelin, they all deserve medals for extreme courage in the face of the Hammer of the Gods.
Led Zeppelin Live 1975-1977 is published by ACC Editions and though the RRP on the back is £29.95 Amazon is selling it at £19.95.
Dave Lewis also has a special limited edition run of the book of 150 copies – individually numbered and signed by the editor with a special interview insert – order via this link: