THE WHO – BIG ARTIST ALBUM

I am presently engaged in writing two 10,000-word chapters and half a dozen smaller, 1,000-word, features for a book to be published next year called Tommy At 50. My co-author, the designer Mike McInnerney, who designed the wonderful blue Tommy sleeve, is writing a similar amount. Mike’s brief is to write about the Mood and The Look, mine to write about The Music and The Legacy.
All of which has caused me to listen again, several times, to Tommy, both my original vinyl edition on Track, bought in 1969, which I still possess but is a bit scratched and warped, and so sounds well ropey. In 1972 Track reissued the double LP on two separate discs, Part 1 (sides 1 and 2) and Part 2, with generic artwork but no libretto, presumably to make it more affordable. On this release the label read Tommy Revisited, and although I can’t recall how I acquired it I seem to have Part 2 of this in my collection. 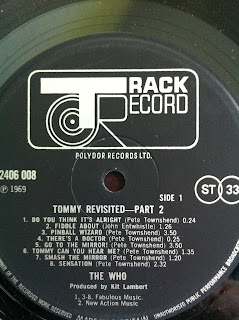 Although in better nick that the original, it’s still a bit dodgy. I also have a mint condition copy as part of the Phases boxed set of the first nine Who LPs on vinyl that was released by German Polydor in 1981, but for reasons I can’t explain (!), this re-issue, though absent of scratches, sounds flatter than the original.

Subsequent remastered CD versions sound much better, and I’ve been listening to these in my car this week and last. Writing about Tommy yet again isn't the chore I thought it would be, but I've got to be careful not to repeat myself. In truth I have so much research material here in my office - about a dozen books, all this vinyl, CDs and DVDs, what I can find on the internet - that I find I actually have too much to wade through. I'll post an extract here when I'm happy with what I'm writing.

In the midst of this research I came across a few of my Who rarities, amongst them this rather strange Japanese CD that a friend of mine who visited that country brought back for me around 1990. 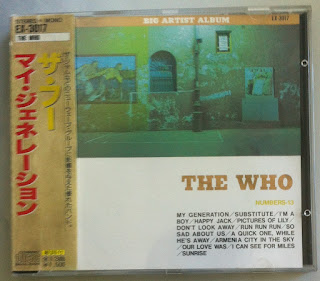 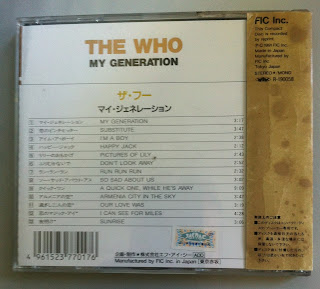 It’s called The Who - My Generation on FIC Records, in what appears to be a series called Big Artist Album(s). Though it lacks ‘I Can’t Explain’ and ‘Anyway Anyhow Anywhere’, the 13 tracks are a decent selection and sound fine. The inclusion of 'So Sad About Us' indicates that whoever compiled it knew what they were doing. Oddly, three of the four tracks from The Who Sell Out, ‘Armenia’, ‘Our Love Was’ and ‘Miles’ are preceded by the commercials from Sell Out, as if they were intrinsic to the songs, which suggests the Japanese record company somehow copied them from the album itself.
I’m not sure of the significance of the picture on the front but at least it’s better than the Spanish album with the wrong photo. For that story read here: http://justbackdated.blogspot.com/2013/12/lo-mejor-de-who.html