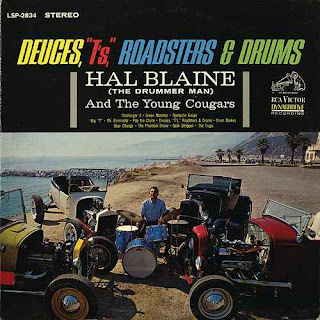 I switched on my computer this morning to discover that Hal Blaine had died. Back in the sixties, if we cared, we simply assumed that Dennis Wilson played drums on records by The Beach Boys, Michael Clarke on records by The Byrds and Mickey Dolenz on records by The Monkees. And nobody did much care who played drums on records by The Ronettes, or The Chiffons, or The Crystals, or Jan & Dean, or Sonny & Cher, or The Mamas & The Papas, or Neil Diamond, or Nancy Sinatra, or The 5th Dimension, or Simon & Garfunkel, or any of the other 40 number ones and 350 top ten hits and as many as 10,000 sessions –including Elvis, Leonard Cohen and god only knows (pun intended) who else – on which Hail Blaine played drums.
Session men were mysterious back room figures back then, probably a bit long in the tooth, set in their ways and – like Robert Plant assumed when Jimmy Page told him about the ‘session bassist’ he had in mind for Led Zeppelin – ‘some old bloke with a pipe’. In reality they were more important to those of us on the dance floor than the faces in the music papers, especially the rhythm sections.
I have no idea how many songs in my iTunes folder feature the drumming of Hal Blaine but it’s probably more than a thousand, not just all those Spector, Beach Boys, Byrds and S&G tracks but heaps of lesser known songs by lesser known acts too. I don’t suppose any drummer was more prolific than Blaine, and when I come to think about it I don’t suppose any individual musician appears on more of these songs I have. And I take it for granted.
In Out Of His Head, his critical study of Phil Spector, Richard Williams introduces his readers to the session musicians who worked with the great record producer, working his way through keyboard players, bassists, guitarists and horns. “Last, but also first,” he writes, perceptively, “were the drummers, whose work was to provide the foundation on which Spector’s greatest achievements would be based. In the beginning there was Hal Blaine, who virtually created a style by himself and became an elder statesman among West Coast session musicians. Of all the elite corps of session musicians who became known collectively as the Wrecking Crew, Blaine was most crucial to the Wall of Sound.”
I am indebted to Richard for drawing my attention to the fade out in ‘The Bells Of St Mary’s’ by Bob E. Soxx & The Blue Jeans in which, uncharacteristically, Blaine thrashes his kit unmercifully, effectively pre-empting the drumming style adopted by Keith Moon. Mostly, of course, he’s just there, like a metronome, like Al Jackson in the MGs, Benny Benjamin at Motown and Charlie in the Stones.
Because we played Phil’s Christmas Album every year as presents were being opened, our two kids associated its sound with that time of the year and, for years afterwards, believed that ‘Be My Baby’, ‘Then He Kissed Me’, ‘Baby I Love You’, ‘Da Doo Ron Ron’ and the like were Christmas songs. I’d love to have been able to tell Hal Blaine that, and that he provided the (American) soundtrack to the sixties for me – and I never even knew it, not until I really cared. Thanks Hal.

(I found the LP at the top of this post on the internet, and liked it because Hal is on the beach, and the first hit he played on was Jan & Dean’s ‘Baby Talk’, a US number 10 in 1959, which is not really surf music but echo-drenched doo-wop, a bit cheesy but we are talking 1959.)
Posted by Chris Charlesworth