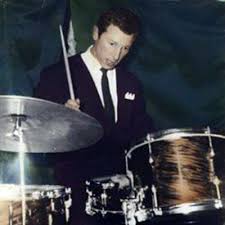 Doug Sandom was to The Who what Pete Best was to The Beatles. Back in the very early days when they were known as The Detours, he was their second drummer, sticking with them for almost two years, from the summer of 1962 until the spring of 1964 when he was replaced by a better fit. That he outlived their far more famous third drummer by over 40 years, passing on today having turned 89 only yesterday, is perhaps a testament to the wisdom of knowing when to hang up your sticks.
The first Detours group, assembled by Roger at the Sulgrave Road Boys Club in Shepherds Bush, comprised Roger on lead guitar and trombone, Colin Dawson on vocals, Harry Wilson on drums and Reg Bowen on rhythm guitar. Then John joined and he proposed Pete join too, replacing Bowen. Colin persuaded Roger that his girlfriend Angela join on vocals and they were briefly billed as Dale Angelo & The Detours.
In July of 1962, at the Paradise Club in South Peckham, Harry Wilson – who was about to go on holiday – was told that a temporary replacement drummer would sit in for the second half of the show, just to get the feel of the band. The temp, Doug Sandom, turned out to be a better drummer than Harry and henceforth he took over at the back. Doug was 32, 14 years older than Roger, the eldest Detour, a full time bricklayer, married and expecting his first child. Nevertheless, according to Roger in his recent autobiography: “Doug was better for us than Harry, my best mate since… school, so he got the job full time. I felt bad for Harry, but the band had to come first.” Roger’s priorities have remained constant ever since.
In his book Who I Am, Pete added: “He was about ten years older than us and he acted like a proper professional musician.”
It wasn’t long before The Detours found themselves supporting Johnny Kidd & The Pirates at St Mary’s Hall in Putney. The Pirates’ singer, guitar, bass and drums line-up appealed to them so Dawson was dumped and Roger abandoned his guitar to concentrate on vocals. The nucleus of The Who was in place, even if Doug was the odd man out.
“I didn’t hate Pete,” Sandom told Mark Blake, the author of Pretend You’re In A War: The Who & The Sixties. “But I didn’t understand him and he didn’t understand me. He was an art student. I was a bricklayer. He and I were so different but when he got onstage, I loved what he did. John was the one I become closest to. I had a lot in common with Roger too. But Roger thought he was the leader of the band and nobody except me would speak up against him.”
This was the period when the group that would become The Who were serving an arduous apprenticeship in London not unlike The Beatles – with Pete Best – in Liverpool and Hamburg. No other British groups that emerged in the beat boom of the early sixties, not The Rolling Stones, not The Kinks, began their apprenticeship so early or worked so hard at it. Between the time he joined and the time he left Doug Sandom played almost 200 shows with The Detours, almost all of them in West London, the most prevalent gigs the White Hart in Acton, the Oldfield in Greenford and the Goldhawk Social Club in Shepherds Bush.
They were a volatile bunch but according to reliable testimony Doug, the senior man, was a calming influence who kept the atmosphere from boiling over. In the period that he was with them they mutated from a straight covers band that played pop hits and a bit of trad jazz into a blues and R&B band, a move instigated by Pete and Roger but one that didn’t really suit Doug. Nevertheless, he soldiered on, juggling his family responsibilities, daytime job and a precarious position in the group that would soon leave him behind. One day they did an audition for an agent that offered to sign them up if they got rid of the tall bloke. “Roger and John were all for it,” Doug told Mark Blake, “but I said, ‘No, we’re a four piece band and that’s how we’ll stay.’” Pete wouldn’t learn of Doug’s loyalty to him until many years later.
The crunch for Doug came on April 9, 1964, when The Who, as they were now known, auditioned for Fontana Records whose A&R man Chris Parmeinter wasn’t satisfied with his drumming. Substitute George Martin for Parmeinter and the situation mirrors almost exactly the circumstances that in the summer of 1962 led to Ringo replacing Pete Best in The Beatles. “Seeing our chance at a record deal fading I cold-bloodedly told the band that Doug would stand down,” Pete wrote in Who I Am. “Doug was deeply hurt by this especially because, unknown to me, he had defended me against being thrown out of the band when another auditioning agent said I was gangly, noisy and ugly. Doug did stand down, with some dignity, so we got our break. It is one of the actions in my career I most regret. Doug had always been a friend and a mentor to me, not to mention he was the first person to get me drunk.”
Doug stayed on to honour a few upcoming engagements, then went back to the building trade. Keith was waiting around the corner and the rest is history.
Doug may have left The Who but he wasn’t forgotten, and from the eighties onwards was a regular at fan club conventions and, occasionally, back stage at concerts. A friendly, unpretentious man, he enjoyed chatting with fans and recalling his days with the band, happily admitting that Keith was more suitable for the job but, when asked if he had any regrets, was inclined to state, “I’m still alive and Moonie isn’t.” 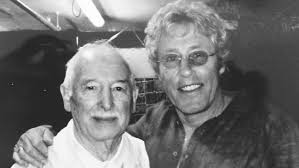 Doug with Roger, backstage in 2010
I met Doug on several occasions, and he was always seemed slightly bemused to be the object of so much attention. One time when we were chatting he told me that John Entwistle was the finest musician he’d ever encountered, not just in the Detours/Who but everywhere else. On The Who’s website today Pete writes: “[Doug] never sneered at my aspirations the way some of my peers tended to do (I was a bit of an egoistic handful sometimes). He encouraged me – as did my best friend in those days Richard Barnes. Doug took a while to forgive me, but did so in the end, and although I didn’t see much of him we remained friends. He would almost certainly have tried to visit with Roger and me at Wembley Stadium this year, and we will both miss seeing him.”
RIP Doug.

Email ThisBlogThis!Share to TwitterShare to FacebookShare to Pinterest
Labels: Obituaries, The Who

Nice Eulogy Chris and a great Analogy with the FF

Another one bites the dust... Rest In Peace, Pete Sandom. Say "Helllo" to Mr. Moon.