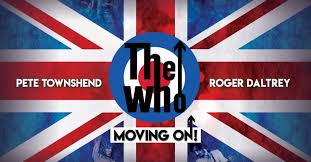 Billing themselves as The Who – Moving On, Pete Townshend and Roger Daltrey are at present touring the USA with a show that offers selections from Tommy and Quadrophenia accompanied by an orchestra as well as their regular touring band (though Pino Palladino has been replaced by Jon Button from Roger’s band) as well as other songs, some without the orchestra.
Stranded in deepest Surrey, your man at Just Backdated is unable to attend but as has occurred before on this blog I have an old and dear Who friend in New York, Lisa Seckler-Roode, and at Monday night’s Madison Square Garden show she was in the second row. “The Garden is deeply entwined with Who history,” she writes and I know this to be true as many years ago I saw her right up front with my own eyes. “I’ve seen so many iconic performances there that, for me, they blur together at times, until I sit down with my ticket stubs in my hand and wait for the moment when the lights to go down and a swell of noise erupts behind me.”
She’s not wrong there either, but one MSG show that Lisa missed was The Concert For New York, on October 20, 2001, the concert of remembrance after 9/11 to honour those who perished that day, not least the fire fighters whose colleagues occupied the front few rows. The reason was that as a Medic Lieutenant for the New York Fire Department Lisa was at home recovering from inhalation pneumonia suffered while she played her part in the rescue. Not being near the front for this Who performance, long acknowledged as one of their best in the post-Moon era, is one of her deepest regrets.
Still, she was at John's last solo show with his band at BB King’s Club the following night. “That was the night he called me out,” she says. “Had me stand and be acknowledged for 9/11. He asked me what I wanted to hear. I asked John and his band to play ’Heaven And Hell’ and it was the last time it was ever played.”
After years as a Who fan she went on to work for Pete’s Eel Pie publishing business in New York, and it while she was on the staff there that she called my NY apartment in tears to relay the news that Keith had died. 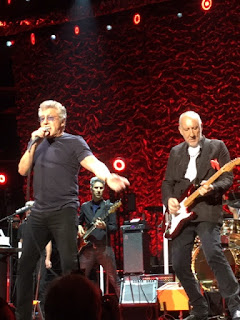 But we digress. Back to Lisa’s report from the Garden: “I was a bit leery initially after hearing this was going to be an orchestral tour. For many of us The Who will forever be the original four elements but I am now coming around to the idea that growth and change has been a great thing for them.
“Tommy has taken so many different forms over its 50 years, as has Quadrophenia over its 46. All in all, it like a bit of a challenge for them and, to be honest, I didn’t think it would work. Well, it does… and brilliantly. 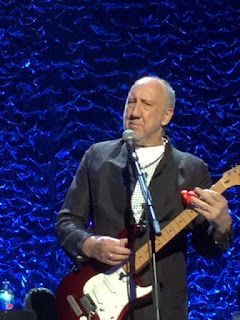 “There was no ‘Can’t Explain’ but the choice of Tommy to open the night’s set was just as good, that glorious C-chord played by the whole gang up there inspiring a huge roar from the sell-out crowd. The ‘Overture’, which sounded truly great with the orchestra, was followed by ‘It's a Boy’, which is particularly poignant as I’ve just become the grandmother to my son’s baby son, ‘1921’, ‘Amazing Journey’, ‘Sparks’, ‘Pinball Wizard’ and ‘We're Not Gonna Take I’. ‘Amazing Journey’ was just that.
“This was followed by a few more well-known songs including a stupendous ‘Imagine A Man’ from By Numbers which they’d never played before. Then the orchestra took a rest, leaving the band on stage for ‘Substitute’ and ‘I Can See For Miles’ and then Roger and Pete played ‘Won’t Get Fooled Again’, just the two of them. It was as if you were seeing them doing an original run through of it alone, in a studio. I’ve seen Pete do this on his own many times but never with Roger… truly lovely. The crowd loved it. 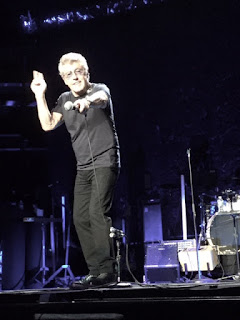 “I saw Quad at the Garden in 1996 on their first attempt at a narrative show with Phil Daniels and loved it but this was even better, with ‘I'm One’, ‘The Punk Meets The Godfather’, ‘5:15’, ‘Drowned’, ‘The Rock’ and ‘Love Reign O'er Me’ all played. The highlight was ‘The Rock’. It was the most powerful it’s ever been, with Pete slamming away on his whammy bar.
“The show closed on ‘Baba O’Riley’ with Katie Jacoby playing the final violin solo as it ought to have been played at every Who concert since 1971. Flames burst out from Katie's fingers. The crowd went bananas. Her interaction with Pete was fabulous, both of them face to face and bouncing to the beat, dancing away… the perfect ending to a glorious show. Don’t miss it.” 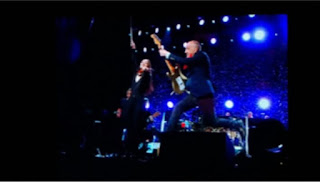 (All pictures taken by Lisa apart from the last one which was taken by her friend Terry McBride. Sorry it's a bit blurred but we wanted to show how Katie and her violin matched PT on a final leap.)
Posted by Chris Charlesworth

I was chatting to Lisa before the show and she was definitely leery . We witnessed the re-birth of a band that many believe was left for dead. Much of the credit must go to Zak , he’s the locomotive that drives the train on this tour as he injects adrenalin into Townshend.