My discovery of photographs of The Beatles at the Gaumont Theatre in Bradford has had an unexpected repercussion in that they, and the accompanying Just Backdated post, were seen by Dan Ealey who, in 1974, called me in New York from Tennessee applying for the job of Nashville correspondent for Melody Maker.
Part of my job as MM’s US editor in those days was to appoint and maintain a string of correspondents in big cities around the country who would send me stories and reviews of important shows happening locally that I hadn’t covered myself in New York. Dan’s phone call was motivated by news of an impending visit to the area by Paul McCartney & Wings and the likelihood that Paul might do something newsworthy, like hold a press conference or even stage a small private show. In the event he did neither but this didn’t deter Dan, a massive Beatles fan, from calling me to claim he was an experienced reporter, which he wasn’t, and extracting from me the letter below that confirms his appointment as ‘Melody Maker’s representative’. There is sometimes a fine line between initiative and deceitfulness but I’m willing, especially now, to give Dan the benefit of the doubt and warmly applaud his resourcefulness. 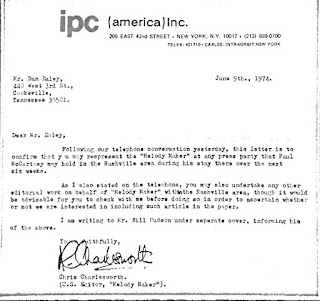 Armed with my letter Dan set out to find out where Paul, Linda and the rest of Wings were staying. It turned out to be a farm belonging to songwriter Curly ‘Junior’ Putnam – writer of ‘Green Green Grass Of Home’ – at Lebanon in Wilson County, Tenn. Dan arrived at the farm gates, brandished my letter and was invited to drive in, whereupon he clocked Denny Laine and Jimmy McCulloch on the lawn and opened up a conversation by asking them to demonstrate how to play the opening lick to ‘Band On The Run’. Jimmy obliged, using a Les Paul that belonged to his bandmate who was with him and which just happened to be in back seat of his car, as did Dan’s Rickenbacker bass which Paul borrowed for three weeks. In that time Dan became a bit of a fixture at the farm, doing odd jobs, manning the gate and generally making himself useful. 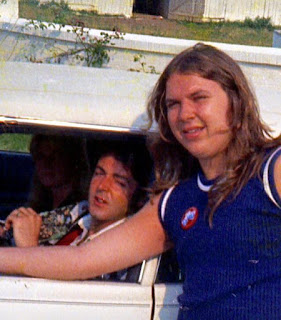 Dan had his picture taken with Paul who wore a fancy embroidered shirt that Dan had given him, and was on gate duty the night that Jerry Reed, Chet Atkins and Roy Orbison arrived for supper. He also smuggled a tape recorder into the grounds and recorded Wings rehearsing, not just familiar material like ‘Let Me Roll It’, ‘Maybe I’m Amazed’ and ‘My Love’ but a new song that turned out to be ‘Junior’s Farm’, inspired, of course, by the location.
I never heard from Dan again, which is probably not surprising; no reports of Paul’s activities in the Bible Belt, no insightful revues of country stars at the Grand Ole Opry, no speculation on who might become the next big thing from the home of C&W. In truth, I forgot all about Dan and the letter I wrote, probably because these correspondents from around the USA came and went pretty quickly, no doubt because the rewards were miniscule even they did bring about free tickets to gigs.
That is, until two days ago. It seems Dan’s brush with Paul & Wings has made him something of a local celebrity, and this week he sent me clips from two TV shows in which he tells his story, with my letter featuring in both. And if they make me look like the victim of an ingenious ruse, then, like Rhett Butler, frankly my dear, I don’t give a damn. 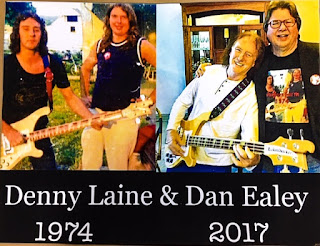 Dan and Denny Laine with the Rickenbacker bass, 43 years apart. Dan sold it in late 1974 but chased it for 42 years, finally retrieving it in 2017.

Do you have any memories of Jimmy McCulloch, Chris? I am finishing his biography and would love to include any anecdotes you have of him.

I'm afraid I didn't really know Jimmy at all. I maybe met him briefly once or twice but I don't have any memories. Sorry. Loved 'Something In The Air' though!